It is with sadness that we advise of the death of Brian Gunn-King on 18th March 2013 in his eightieth year, following a long neurological illness, bravely borne. 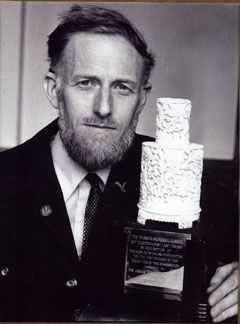 Brian became a vegetarian (soon vegan) during his teens and devoted the rest of his life to spreading the word about vegetarianism, veganism and the environment.

Brian was primarily involved with the International Vegetarian Union of which he was for many years, Honorary General Secretary, helping to organise several international congresses in the 1960s and 70s and working closely with the then-President of the IVU, the late Dr Gordon Latto, winning the Mankar memorial award for services to vegetarianism (see photo) in 1977.

On a local level in his adopted Northern Ireland (he was born in Coventry), Brian and his Iyengar yoga teacher wife Margaret arranged many events and cookery demonstrations via the Vegetarian Society of Ulster of which Brian was for some years the president. Brian also served as the president for the Ulster Society for the Preservation of the Countryside working alongside the late founder Wilfred Capper who, inspired by the foundation of the 250-mile Pennine Way in England, founded his own 560-mile ‘Ulster Way’ in Northern Ireland, saving many areas of outstanding natural beauty across six counties from ruinous development.

In his professional life as a town and country planning chief, Brian also did much to protect and conserve both beautiful architecture and beautiful scenery, successfully advocating responsible landscaping and greater tree-planting in a number of new and rejuvenated areas. One village Brian worked on – Gracehill – won 15 environmental awards as a direct result of his input and Brian featured in a number of books, papers and documentaries on the environment and architecture of Northern Ireland. In addition Brian served as judge for Ulster’s ‘Best Kept Village’ competition for many years.

Brian was a lifelong member of Men of the Trees promoting the planting of millions of trees worldwide in addition to a number of architectural societies. When not campaigning for healthier lifestyles, animal welfare and the saving of heritage and the environment, Brian enjoyed veganic gardening, philately, photography, coin and postcard collecting, rambling, travelling and relaxing with his beloved cats in front of detective dramas.

An avowed atheist, Brian was buried in Northern Ireland following a humanist service, in accordance with his wishes. Regrettably no green cemetery was available in the area, though the family managed to source a handsome willow casket of which Brian would have thoroughly approved. Brian leaves a wife Margaret, and two daughters, Sita-Laura and Venetia.


For more about Brian's work with IVU in the 1970s, see:
worldvegfest.org/.../how-the-vegans-landed-in-america