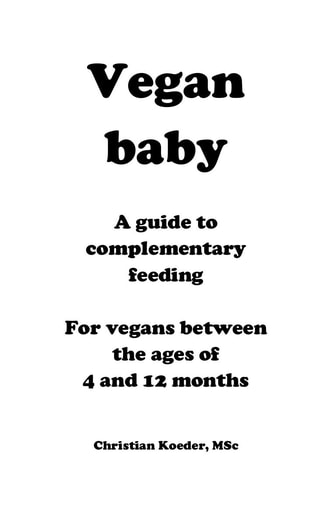 Vegan nutrition for babies is still a contentious issue for many, causing a lot of uncertainty, or even instilling fear. Can a completely vegan diet really be suitable for children and even babies? In other words, can a completely vegan diet provide all the necessary nutrients which are needed to allow the baby to grow normally and develop healthily, both physically and mentally? The answer is yes ... but certain nutrients should be paid attention to – most importantly vitamin B12. In other words, a vegan baby’s diet should be “well-planned”. What does “well-planned” mean? This booklet will explain.

But wouldn’t it be safer to err on the side of caution and give your baby a “normal”, i.e. a non-vegetarian diet? The answer is: No, not really … as long as the vegan diet is wellplanned. Nothing suggests that a well-planned vegan diet is any less safe than a typical “Western” (i.e. a not very wellplanned) diet – or even than a very well-planned non-vegan diet.

There is also no evidence that a typical “Western” or other non-vegan diet would have a more beneficial effect on a baby’s long-term health and life expectancy compared to a well-planned vegan diet. All recommendations in this book are evidence-based. That means that they are based on what is known from scientific studies, including the most recent scientific studies. These recommendations are also supported by years of personal experience.