With 16 million (9 percent) vegetarians in a 2012 poll, Brazil ranks second worldwide behind India’s 400 million – as long as data from China are not available. However, Brazil ranks first in Jewish vegetarians. How? University of São Paulo historian Anita Novinsky estimates that 30 percent of the immigrants to Brazil until 1700 CE were secret Jews fleeing from Inquisition. Referring to these founder generations whose typical surnames like Oliveira (olive tree), Carvalho (oak) or Nunes son of Nun) are abundant in Brazil, serious estimates regard between 15 and 60 percent of  Brazilians to be grandchildren of Jew1. Banking on a modest mean of 35 percent, one could proudly claim that Brazil has some six million “Jewish” vegetarians. Beat that! 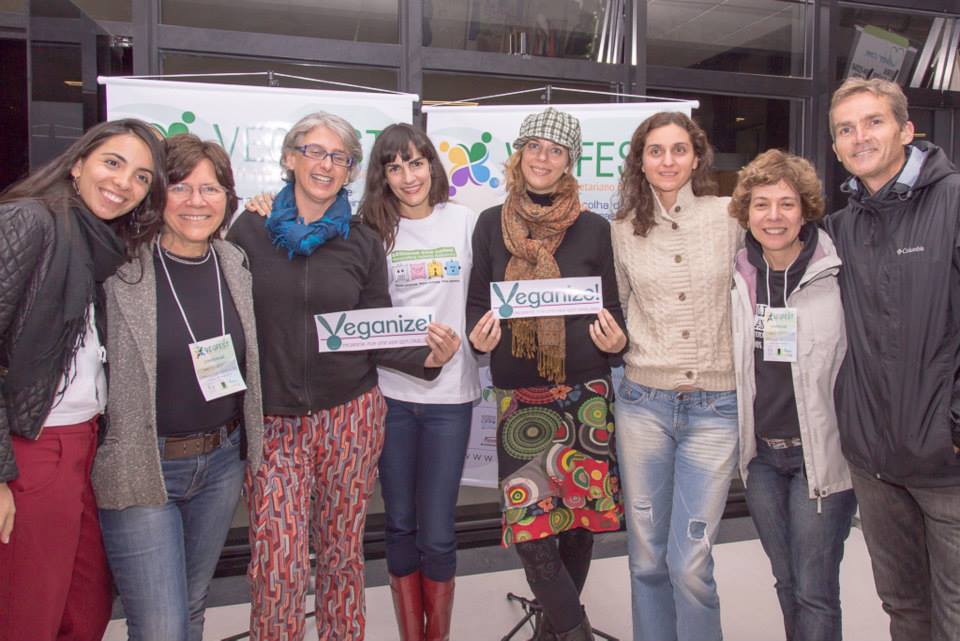 The Vegfest on September 25-29 in Curitiba, welcoming more than 500 guests from 120 Brazilian and Latin American cities, was the ten-years-birthday-party of Brazilian Vegetarian Society (SVB). And it was female at a rate of two to one.  Marly Winckler, who has been the SVB baby’s midwife in 2003 and meanwhile did the Brazilian translation of Peter Singer’s Animal Liberation, is now the president of SVB as well as of International Vegetarian Union. No doubt, Brazil is avant-garde in vegetarianism. “Marly, what is special with this Brazil?” – “Stefan Zweig was right when he called Brazil the land of the future. With its ethnic melange and tolerance it really is a new culture. But also Brazil will have to pay for its sins against nature. We need new parameters of civilization, a culture of respect between humans, animals and nature. But this moment in history is favorable to our movement. One cannot deny the facts any more, for instance the very real danger of pandemics in a post-antibiotic era due to the abuse of antibiotics in livestock industry. So there is an actual receptivity on the side of the authorities. The state of São Paulo, for instance, has introduced the option of a vegetarian meal in all public schools. Our host, the Federal Agrarian University of Paraná, will go on offering 8000 vegetarian meals daily after the Vegfest. On the other side, vegetarianism faces big financial interests in the agribusiness. But I repeat, the facts are on our side, and there is much dynamics. Vegetarianism is the future.” 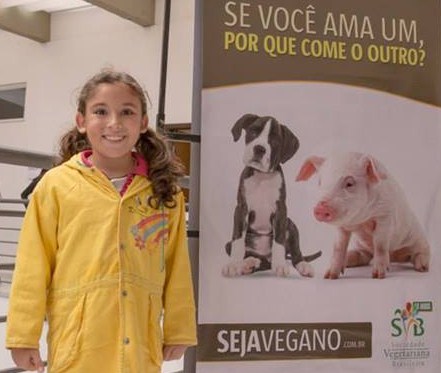 Marly ascribed the female predominance mainly to the fact that women are closer to kitchen and more concerned with health and nutrition, while the males are defined to a more rational and tough-guys-role in society. I would like to add that Brazilian men don’t feel ashamed to show softness. For instance the white-haired man whose daughter, a biologist, had tears in her eyes when her daddy during Curitiba’s vegan film festival last year stood up and declared “I’ll eat no meat any more”, and who now himself had tears in his eyes when he explained his motives to have become a staunch vegetarian. Anyway, Brazil’s self-conscious women don’t lack rationality in their approach to the problems caused by meat consumption. Nicole Oliveira from Humane Society soberly stated that since meat consumption doubled since 1973, overweight rose from 43 to 51 percent and obesity from 11 to 17 percent since 2006. Ellen Jabour pointed to Scandinavia where health insurances offer a fifty percent bonus for vegetarians, and to the unpleasant detail that in Brazil vegetarianism still is “the habit of the well supplied classes”. Paula Brugger shed light on political reality: The Banco Nacional de Desenvolvimento recently invested 9.5 billion R$ (more than 3 billion Euro) into freezing plants of the three biggest meat producing companies, taking 40 percent of the money from workers’ aid fonds, thus forcing taxpayers to support cruelty. Nina Rosa Jacob, founder of the same-named institute for animal welfare, in spite of its and her high prestige was rejected by TV Globo since the main sponsor of Brazil’s main TV channel happens to be a meat producer.

What meat does to health was mainly a male issue. Dr. Acosta Navarro went far back to vegetarian Australopithecus afarensis (“Lucy”) 3.5 million years ago. Man’s meat eating intermezzo started no sooner than 500.000 years ago, continuing with a meat share of 2 percent of daily diet. Egyptian Pharaos, however, already suffered from the meat disease whose world champion is now Brazil: atherosclerosis, called “the world’s killer no. 1” by Navarro. Relieving the many young women in the audience, pediatrician Dr. Ribeiro de Araujo dispelled the myths of children needing meat and cow milk for their development. Nutritionist and cookbook author Astrid Pfeiffer added that while 40 percent of vegetarians live with iron deficit, 60 percent of meat-eaters do, while lack of Vitamin B12 is an issue for 50 percent of vegetarians but also for 40 percent of meat-eaters. Australian Paul Turner presented the NGO Food For Live which performs on a world-wide scale what Food Cycle (presented in the September issue of Jewish Vegetarian) offers in the UK: Vegan food for people at risk. 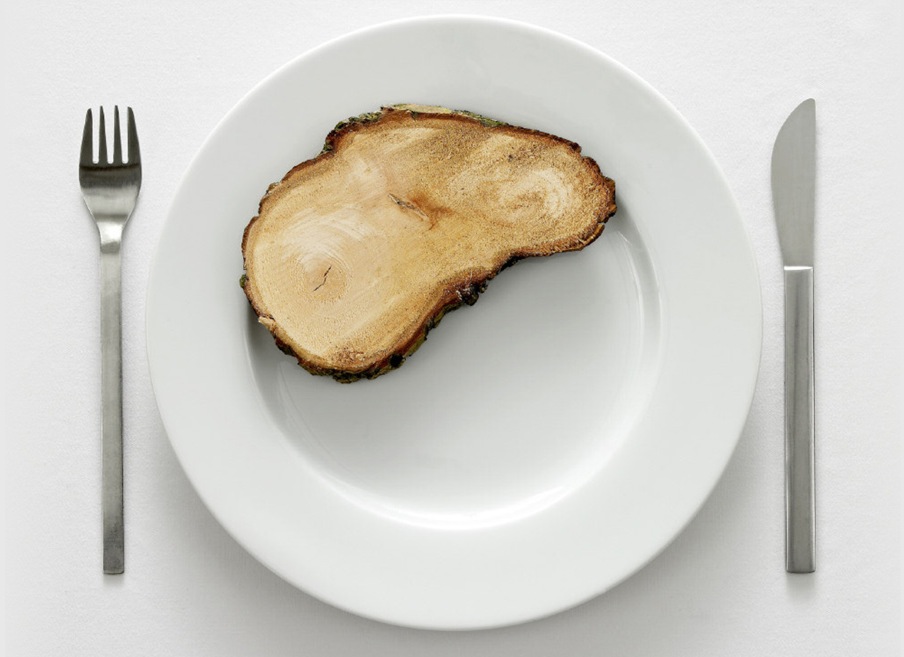 The young activist Guilherme Carvalho is an example of what Marly deems the necessary next step: professionalization in vegetarianism. Working full time now for SVB, he presented a recent study of Vienna university, yielding that 1 kilogram of Brazilian beef equates 44 square meters of former rainforest, wastes 16 tons of water and causes the greenhouse gases of a 1.600 km car trip. And Brazil has the biggest cattle herd, is number one in chicken meat export and number two in soy production. Another young professional, Fabio Nunes, not only unmasked the meat-trick of  fazendeiro Senator Katia Abreu who claimed transgenic soy saving poor Brazilians from starvation while 97 percent of this soy are fed to animals that end on European dishes. He also presented the organic producers cooperative of Barra do Turvo as an example of what he considers the way out: valorization of the rural worker, and permaculture.

This Vegfest would not have been Brazilian without arts and music. Vegan piano and guitar music, vegan Arab belly dance, that’s easy. But the quartet Djembe Fula (three to one female, again) who enchanted the audience with west-African percussion attach great value on their tambores veganos that Luca builds himself: rhythm & no goat’s hide.

At the final forum the next Vegfest’s organizer team, mainly female again, promised to strive for a similar success in 2015, inviting Brazil’s vegetarians to a city with 10 percent veggies  and Latin America’s oldest synagogue: Recife, Pernambuco. The Kahal Zur Israel Synagogue, founded in 1636, still conserves the names of its founding members, those  Moshe Nunes, Jacob Navarro, Moises de Oliveira ...

Dr. Konrad Yona Riggenmann has been teaching for three decades in German public schools. He published a dozen of his pieces for school and amateur theatre, made his PhD with a dissertation about Brazilian school system and also issued books and essays about Jewish-Christian relations in history. He now lives in Curitiba where he engages in SVB and meets in synagogue with quite a lot of Brazilians who returned to their Jewish roots.