Dear friends and colleagues of the noble cause of vegetarianism!

Welcome to the 1st International Vegan Alliance’s–from Nov 14 to Nov 21.

I’m so happy and honored to open this amazing event which is a sight of the times! Veganism came to stay, and it is putting down its roots deep and wide. 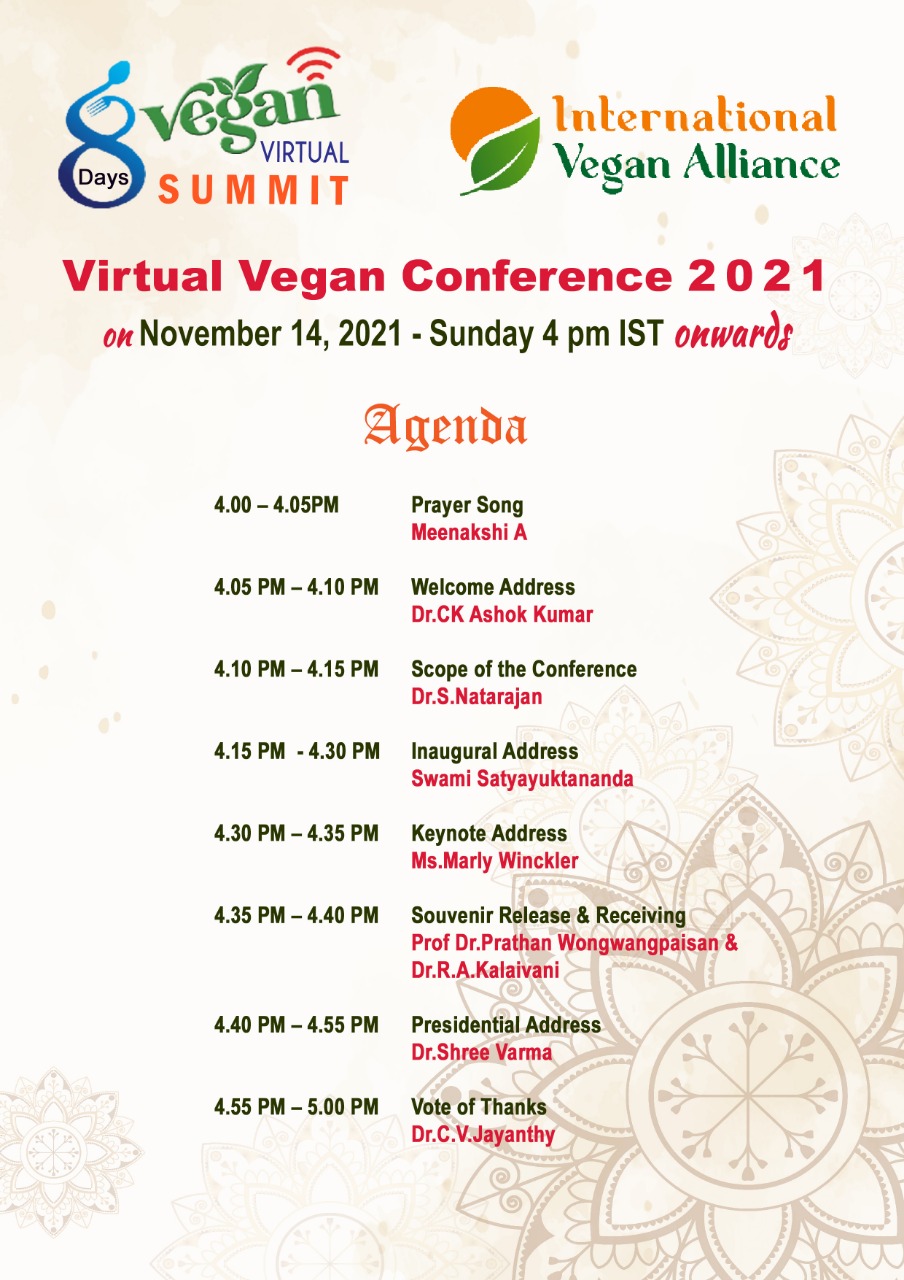 I´d like to give a big thank to Jayanthy Cuddalorevenkatesan, president of the International Vegan Alliance’s, who is the main organizer of this event and to all her team who helped to put together this nice event. I’d like to give a special salutation also to dear friend Ashok Kumar, who is ever helping vigorously our movement.

Time has come for our noble cause to occupy the place it deserves in human history: the very center of it. With the advent of the Internet and the dedicated effort of thousands of activists worldwide now more and more people are getting access to the incredibly harmful impacts of a meat and other animal products diet for one side and the many benefits of a vegan diet on the other side.

India is a country in which vegetarianism has long had an important presence. However, India urban populations are more and more following a meat-centered diet.

Fortunately, we can also see signs that veganism is making its appearance in a more visible way all around the world–including India–as never before. It is high time for India to rediscover its past plant-centered diets to meet contemporary challenges–with the new ‘ingredient’: totally free from any animal product.

In this occasion I’d like to remember someone who is dear in this country – and has many sympathizers worldwide. Mahatma Gandhi. As many know Gandhi went to England in 1888 at the age of 19. He was at the time influenced by someone who put in his head that eating meat would make him stronger to defend the independence of India which was already his dream. So, he consumed some meat - but due to a promise his mother made him to do before starting to England that he would not eat any meat he was keeping the promise.

In London he was finding difficult to eat, because in addition to not eating meat and eggs, the type of food he found was very different from what he was used to. He walked a lot to find a place where he could have his meals. On one of these hikes, he came across a vegetarian restaurant on Farringdon Street, the Central Restaurant. The establishment also sold books and magazines and there he bought a copy of A Plea for Vegetarianism, by Henry Salt, whose reading convinced him to become a vegetarian by choice, and not just because of a religious requirement. Before he left England, he organized a farewell dinner for vegetarian friends, where he expressed the hope that a future Congress of the Federal Vegetarian Union, which later became the International Vegetarian Union) would be held in India.

Gandhi's desire for a Vegetarian Congress to be held in India, did not materialize during his lifetime. However, in the early 1950s, a group of Indians began efforts to achieve this goal - and, finally, in December 1957, they held the 15th World Congress of the IVU, the first outside Europe, in Bombay, Delhi, Calcutta and Madras - an event of great repercussion in the country, with the participation of the main Indian statesmen, including President Rejendra Prasad, Prime Minister Jawaharal Nehru and at least five ministers of state.

Gandhi, of course, was remembered at the event. In the words of Rukmini Devi Arundale, chairman of the Congress reception committee and vice president of the International Vegetarian Union (IVU) for 31 years:

“If Gandhi were still alive, he would certainly have been the guest of honor at the Congress. "I hope, as a result of this Congress, Government itself will be convinced of the necessity of promoting vegetarian diet at least from the nutritional and economic point of view, if not for humanitarian reasons, though I believe that the Government of a people who call Gandhiji the Father of the Nation should be happy to govern in the light shed by his principles."

We are still waiting for this to become a reality. And this time adopting the diet that Gandhi struggled for, but the science of his time didn’t support – contrary to the science of today which fully support a vegan diet.

Thank you very much.