IVU is divided into eight regions: Africa, Asia-Pacific, Asia-South and India, Asia-West, Middle East, Europe, North America and Latin America and the Caribbean. The Regional Representatives of the IVU are appointed by the International Council, which also elects its Chair. 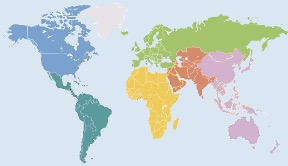 The aim of the IVU is to promote vegetarianism throughout the world. The affairs of the IVU are governed by the International Council, whose members are elected by email by its more than 120 member organizations.

As of 2012, its most important world event was renamed “IVU World Vegfest”.

In 2019, at the IVU Vegfest in Berlin, the name was changed to IVU World Vegan Festival. Thus, the first event that will carry this name will be the 48th IVU Vegan Festival, in Beijing, China, supposed to be in 2020, but for pandemic reasons postponed to 2021
.
It is worth mentioning that the naturopathic societies of the time, contrary to some of the ones today, promoted vegetarianism. In fact, this is how the editorial of O Vegetariano reads: “These philanthropic societies aim to promote the health and well-being of humanity, advising food and hygiene in accordance with nature. They claimed meat as food to be:

1. The violation of one of the most important laws of physical health that govern human beings and, therefore, the cause of most of the pain, suffering, disease and social depravity.
2. The transgression of the moral law of love because it involves the daily slaughter of animals and the practice of absolutely unnecessary cruelty”.2

Previously, there was a regional secretary of IVU that covered all the Americas, but in 1975, there was a formal separation between North America and Latin America, which has since had its own Regional Secretaries. Dr. Becerra Lima, from Mexico, was appointed Regional Secretary for Latin America, remaining in the position until 1979. Also prof. M. J. Londono, from Colombia, was elected to the IVU International Council, remaining until 1982. In 1977, Rafael Lezaeta, from Chile, was elected to the IVU Council.

In 1998 the discussion lists of vegetarianism veg-latina and veg-brasil are created in addition to the website Sitio Vegetariano (SitioVEG). They were pioneering lists and sites in Portuguese and Spanish for discussing vegetarianism. With this, an important channel of communication was established between vegetarians from all parts, especially in Latin America, speaking Spanish and Portuguese respectively. From then on new organizations, sites and all kinds of initiatives for the propagation of vegetarianism began to emerge. A very important instrument that made all this communication possible was undoubtedly the Internet. And with all this begins a new moment of the vegetarian movement. It is fair to say that there were many vegetarians scattered everywhere, and a desire to share what did so much good to them. So these communication resources found fertile soil in which to flourish.

In 2000, Marly Winckler, from Brazil, was appointed IVU Regional Coordinator for Latin America and the Caribbean, becoming the first woman to hold this position. In this same year the Argentina Vegetarian Union (UVA) was founded.


In 2003, the Brazilian Vegetarian Society (SVB) was created, which would organize, in 2004, the 36th IVU World Vegetarian Congress, in Florianópolis, Brazil
.
According to John Davis, administrator and historian of IVU: “The new beginning of IVU really came in 2004, with the first IVU Congress in Latin America. The 36th IVU World Vegetarian Congress was a great success, kicking off more vegetarian activities throughout Latin America”4.

The event had 700 subscribers from 35 different countries and 1,300 participants in total. Ten Latin American countries were present, and the Latin American Vegetarian Union – UVLA was founded at this time.

In 2005, soon after the IVU Congress in Brazil, the Uruguayan Miguel Facal was elected to the IVU Council. Miguel was present at the Congress in Florianopolis and later also at the Latin American one, in São Paulo. In this same year, the Vegetarian and Vegan Union of Uruguay was founded.
In 2005, the IVU Regional Coordinator for Latin America, Marly visited Montevideo, Uruguay, at the invitation of the Uruguayan Vegetarian Union (UVU) and the Uruguayan Vegetarian and Vegan Union (UVVU), many of whose members later, in 2006, participated of the Latin American Congress in São Paulo and in 2009 of the Vegan Festival in Rio.
In December 2005, the IVU coordinator for Latin America and the Caribbean visited Argentina for the 2nd National Vegetarian Congress, organized by the Argentina Vegetarian Union (UVA). On this occasion, Marly Winckler met Delio Esteve, an 80-year-old historical vegetarian and her son Claudio Esteve, whose grandfather Juan Esteve Dulin was a famous naturalist. 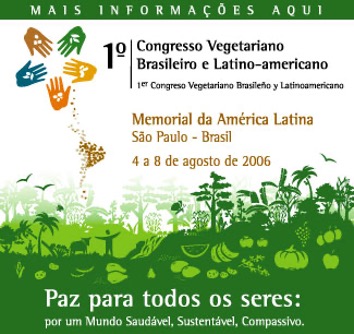 In 2011, Marly Winckler was elected president of IVU.5 She is the third woman and the first Latin American to hold this position. In the same year, Manuel Martí, president-founder of the UVA, is appointed Regional Coordinator of the IVU for Latin America and the Caribbean.

At this time many vegetarian events are being organized by all Latin American countries. The vegetarian / vegan movement is growing exponentially, and the prospects are the best possible.6
In view of the discovery of the existence of the five Latin American Vegetarian Congresses mentioned, we started to count, as of 2006, these events in the numbering of our Latin American Congresses / Vegfests.
_________________
References:
1. Full report in:
https://www.facebook.com/pg/InternationalVegUnion/photos/?tab=album&album_id=196292587080595
2. O Vegetariano Magazine, Sociedade Vegetariana Editora, Porto, 1917.
3. In 1994, the author of this article participated in the IVU Congress in The Hague and met Joaquim Him, from Panama.
4. John Davis, Learning from the developing world, IVU, 2010. https://ivu.org/index.php/blogs/john-davis/147-learning-from-the-developing-world
5. John Davis, Latin America leads the Veg World, IVU, 2011. https://ivu.org/index.php/blogs/john-davis/124-latin-america-leads-the-veg-world
6. For a report on the history of Vegetarian Societies in Latin America see: https://ivu.org/lac/history.html Much of the information in this article comes from there, as well as from https://ivu.org /history-legacy-pages.html
Tweet