The vegan school that invented vegetarians

We now know that the people closely connected with the Alcott House Academy, near London, were the first to call themselves ‘vegetarian’. This is how the school began. 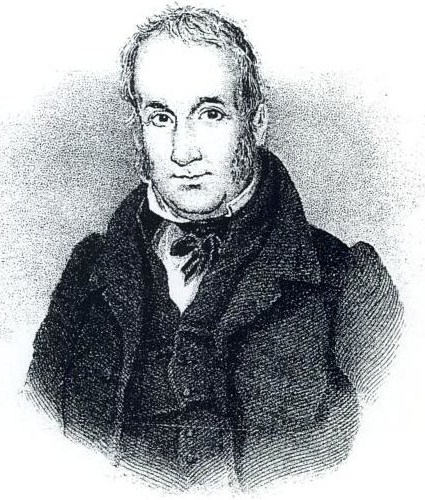 James Pierrepont Greaves was born in 1777, and for his first 40 years he did nothing of any great interest to us. He ran the family drapery business in London, but in 1815 it was bankrupted by trading problems during the Napoleonic wars. That's him right.

In 1817, he read ‘Return to Nature, or a defence of the vegetable regimen’ by John Frank Newton, published in 1811. The book was in his library inventory, he used parts of it in subsequent articles, and it was consistent with everything he did for the rest of his life.

The ‘nature’ that Newton wanted to return to was the Garden of Eden, he quoted the Edenic diet in Genesis 1:29 – “I have given you every herb yielding seed . . .  and every tree, in which is the fruit . . .  to you it shall be for food”. He also wanted non-human animals to share the garden as equals.

Newton wrote about how his four young children adapted to this new Eden at the family home in Grosvenor Square, London – and this seems to have made a particular impact on Greaves. Soon after this Greaves says he read about the work of the reforming educator Pestalozzi, and in 1818 he moved to Yverdun in Switzerland to study with the master. For Greaves the route to Eden was by educating children from a very early age.

In 1821 Greaves’ sister sent a letter of introduction to a friend in Germany that he was visiting, she said: “… he has few needs, eating only soup and potatoes and drinking only water.” We know he did actually eat other plant foods but ‘only water’ was straight out of Newton’s book (ie no milk), which was dedicated to the highly respected Dr. William Lambe FRCP who was giving this ‘vegan’ diet some scientific credibility.

Greaves returned to England in 1825 and co-founded the Infant School Society, becoming its secretary.  Pestalozzi’s approach eventually became the educational standard throughout the western world, but Greaves had a hard time persuading 1820s Londoners to understand it, and gave up after a few years.

During 1832 Greaves was helping his sister with some social work in a deprived village in the west of England, and became acquainted with Sophia Chichester, the wealthy owner of the nearby Ebworth Park estate. Her support was later crucial in funding his school.

Back in London, by 1836 Greaves began calling himself a ‘Sacred Socialist’, and held weekly meetings of his ‘Aesthetic Society’ at his home in Camden. He attracted some very devoted followers, and we know that some of them adopted his diet as well as his particular version of religious mysticism (which he then seems to have backdated to 1817).

Meanwhile… over in Boston, USA:

In 1830 a Boston publisher printed a book containing a series of letters from Pestalozzi to ‘a Mr. Greaves in London’. This was read by Bronson Alcott, one of the Transcendentalist group in nearby Concord. Alcott was sufficiently inspired by this to open his own Pestalozzi-style school in Boston, which ran successfully for a couple of years in 1835-36. The picture, below, shows the informal ‘conversational’ arrangement of Alcott’s classroom – very different to the traditional rows of desks. 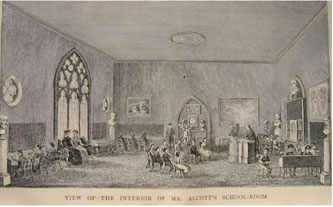 In London, Greaves was also thinking of opening a school, when a friend returning from America in 1837 gave him two books about Alcott’s school. Recognising a kindred spirit he immediately wrote to Alcott at some length – but he had no way of knowing that by the time he read the books Alcott’s school had already closed due to objections from local religious groups.

Greaves’ letter (which we have in full) was entirely about educational matters, as he also seems to have been unaware that Alcott had adopted the ‘vegetable diet’ after attending a lecture by Sylvester Graham in Boston in 1835. But Alcott had become rather depressed after his school had closed, and failed to reply.

Despite this initial lack of response, Greaves went ahead and opened his school on Ham Common near London, naming it the ‘Alcott House Academy’, funded by his wealthy patron, Sophia Chichester.

The school was in a large building surrounded by four acres of land, and pupils were expected to help with extensive fruit and vegetable gardens to make it largely self-sufficient in food. Dr. William Lambe, now in his 70s, was still working in a London hospital, and we have reports that he visited the school to see his ‘vegan’ ideals put into practice. All animal products were excluded, as well as for food.

Greaves remained living London, and was one of several visiting teachers at the school. The 1841 UK census shows that the only people living at Alcott House were teachers and pupils – 31 people in all, the pupils aged 2-14 with some 15 year olds listed as teachers. In the early years it was purely a school, only later becoming a ‘community’, though there were many members of the support network who seem to have stayed occasional nights without living there.

Contact was eventually established with Bronson Alcott, and in 1842 he was able travel to England to spend four months at the school named for him. Unfortunately James Pierrepont Greaves had died a few months earlier, so they were never able to meet.

Alcott House remained open until 1848. For more about how they became the first people to call themselves ‘vegetarian’, and launched the Vegetarian Society see my earlier blog: Vegetarian equals vegan!

For more about Alcott House, and Bronson Alcott, see my free e-book: ‘World Veganism – past, present and future.” It has now been updated to include the above article, and more. You can download it for free, or replace your existing copy at: www.ivu.org/history/Vegan_History.pdf (8mb)