Throwing the lion to the Christians - Veg*ism and Religion

I have absolutely no religious inclinations at all - which might have made me an odd choice for a speaker at a conference of the Christian Vegetarian Association UK (CVAUK) back in August 2010.

As IVU Manager, I try to treat all religions with equal respect as they are an inevitable, and indeed essential part of promoting veg*ism worldwide. My research into the history of vegetarianism has countless crossovers with the history of all religions, so I try to have some basic understanding of them all.

Among the current IVU member organizations we have veg groups representing various sub-sects of Christians, Jews, Buddhists, Hindus, Jains, Hare Krishnas, Muslims, some spiritual groups that don't fit easy labels, and others that make a point of being strictly non-religious.

I am also very aware that there are millions of people around the world who would not consider going vegetarian without the blessing of their religious leaders. So we need to find ways of helping those leaders to see veg*ism as an opportunity, not a threat.

Historically some have seen it as a threat - in the middle-ages the Christian Church burned vegetarians at the stake as heretics... Fortunately they don't do that now, but there are some leaders whose underlying views don't seem to have changed very much.

Religions generally change very slowly, which allows the IVU collection of articles about many religions to go back 60 years or more, and still be relevant today. See: www.ivu.org/religion

The photo below right sums up for me how vegetarianism can bring religions together. I took this in Indonesia, November 2009. The young woman on the left is Muslim and her friend was a Seventh Day Adventist Christian - they were inseparable throughout the time we were there. The rest of that lunch table was made up of Buddhists, Hindus, and odd bods like me, all there for the

I was initially attracted to attend the UK Christian Veg Conference by the academic quality of the speakers - mostly veg*n theologians who had taken historical topics for their talks. So I offered a talk on the religious origins of organized veg*ism. If these guys can persuade other Christians that veg*ism is a positive step then IVU will do whatever it can to support them - as we will for all religious groups.

It turned out to be very worthwhile, and enjoyable, with 30-40 of us on the Leeds University campus, jointly organised with the Theology Department. Despite my own lack of any religion, my previous visits to Leeds, in Yorkshire in the north of England, have also been to Christian Churches, researching my family history - churches and graveyards are usually the only old buildings still standing, so I'm beginning to get certain associations with the place. 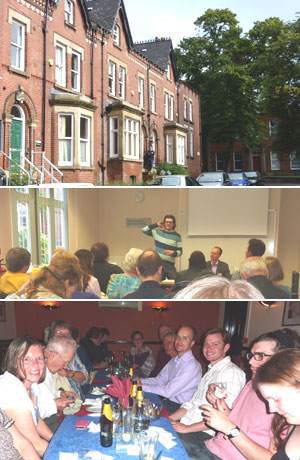 The Saturday was made up of some fairly serious, and very interesting, talks from academic theologians - the last one speaking about Hinduism for comparison - and all rounded off in the evening with a lot of fun at Hansa's Gujarati veg restaurant a mile or two down the road.

The photos on the right are - top: the meeting place where the University has taken over a row of old houses, with Father John on the steps. middle: Matthew Barton, from the Leeds Theology Department, getting the sessions underway with Cambridge theologian David Grumett about to speak. bottom: some of the group at Hansa's Gujarati veg restaurant.

Sunday began with a Mass, which I skipped, but it was followed by the slightly inappropriate timing of me addressing a meeting of Christians on a Sunday morning. I gave a presentation about the origins of organised vegetarianism, and the important role that 19th century Christians had played in it.

After some further lively talks from Father John and the wonderful 80 year old CVAUK president, Don Gwillim - all much more light-hearted than the Saturday sessions - we divided into groups 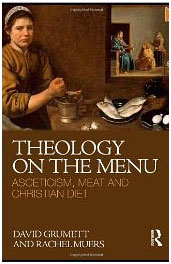 for some productive workshop discussions, including some disturbing accounts of the open hostility they often receive from flesh-eating Christians.

It was a very useful weekend, I learned a lot and hopefully was able to contribute something to the group in return. For anyone with an interest in all this, check out 'Theology on the Menu - asceticism, meat and the Christian diet' by David Grumett and Rachel Muers, who both spoke on the Saturday.

And see the Christian Vegetarian Association UK at: www.cvauk.org (a member of IVU)

Maybe one day I'll go to Leeds for something other than churches, graveyards and Christians - but I do hope that CVAUK organises more conferences like this one, and indeed it would be great to see veg*ns from other religions around the world doing something similar. We do all have a lot to share.