In 1850 a British vegetarian, living in India, wrote to a journal in England mentioning that his diet included ‘Graham bread’. Such was the worldwide fame that the American Sylvester Graham had achieved in his promotion of whole-wheat brown flour, to replace the refined white flour that had become common by the early 19th century. 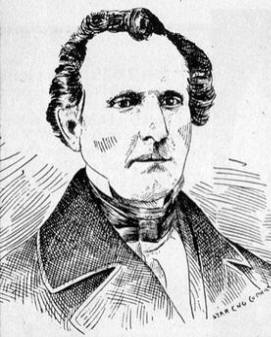 Most Americans today are familiar with ‘Graham crackers’, though Graham himself never mentioned them in any of his books. They seem to have been a later invention by commercial bakers, originally using what had become popularly known as ‘Graham flour’.  But there was much more to Sylvester Graham than just his baking skills.

He had a difficult early life, a sickly child growing up on a Connecticut farm and largely self-educated. But by 1826 he became a Presbyterian minister and, as Rev. Graham, joined the temperance (anti-alcohol) campaign. This took him down thru Rhode Island and New Jersey, then in 1830 to Philadelphia.

At that time the only organization in North America promoting the ‘vegetable diet’ was the Bible Christian Church in Philadelphia, where members of the BCC from England, led by William Metcalfe, had migrated in 1817. Graham didn’t join their church, but he did adopt their diet, with reservations about their use of eggs and dairy products.

We know he was also studying the 1815 book by Dr. William Lambe, from London, on the ‘Water and Vegetable Diet’. Lambe’s biographer claimed in 1873: “A People’s Edition has been published in America, and it forms the basis of Graham’s Journal, and of Graham’s Lectures.”

Dr. Lambe promoted a diet entirely of plant food plus distilled water, to which Graham added more ideas of his own, especially on bread. In his 1835 book ‘A Defense of the Graham System of Living’, he refers to Dr. Lambe briefly (limited by the anti-British feelings at that time), but took a more flexible approach by acknowledging that most people would continue to use eggs and dairy products, even when they stopped eating animal flesh. He insisted that milk, if used at all, should very fresh, direct from the cow - not very practical for city-dwellers. But he made his own views quite clear:

p.125: “It has been customary from time immemorial to speak loudly in praise of milk . . . nevertheless, I am firmly convinced that it is by no means a wholesome article of diet.”
p.128: “As an article of diet, butter is decidedly pernicious, even when fresh…”
p.131: “As a general rule, all kinds of cheese are difficult of solution in the stomach.”
p.133: “Honey . . . like other concentrated forms of aliment, is improperly used as food.”

He makes similar objections to any animal food, including eggs, along with tea, coffee, chocolate, tobacco, opium, salt, sugar, pepper, mustard, ginger, salad oil and alcohol, insisting that the only acceptable drink is pure water. He also promoted the importance of exercise, sound sleep and cleanliness – all way ahead of his time for 1835.

Sylvester Graham’s next book was the one that perhaps brought him the most attention: ‘A Treatise on Bread and Bread-making’, 1837. He went into great detail about the history of bread and how refined white bread was unhealthy. Whilst insisting on the use of whole-wheat flour he again accepted that most people liked their bread made with a mixture of milk and water, but still made his personal views quite clear:

pp.88/89: “… the very best and most wholesome bread is that which is mixed with pure soft water.”

This was another reference to the distilled water promoted by Dr. Lambe and his followers in England. We have details of some correspondence between Lambe (now in his 70s) and Graham in 1837, including the full text of Dr. Lambe’s letter of March 20, repeating his insistence on pure water.

By this time Graham’s fame was spreading from his lecture tours, and ‘Grahamite’ boarding houses were being set up in New York and Boston by some of his followers.

In 1839 Graham published his major work “Lectures on the Science of Human Life”. This had a series of numbered paragraphs, and #1291 says: "...though they do better on a milk and vegetable diet than one of flesh and vegetables, yet they do best when they confine themselves to a diet of pure vegetable food and pure water."

This came to the attention of William Horsell, secretary of the first Vegetarian Society, founded in England in 1847. Horsell was also a publisher and in 1849 he brought Graham’s book to the much larger number British vegetarians, where it made a significant impact.

Back in the USA the leaders of the (very ovo-lacto) Bible Christian Church in Philadelphia promoted the idea of an American Vegetarian Society, which was launched in New York in April 1850, with Sylvester Graham one of several Vice Presidents.

In London, Horsell had also been publishing his own journal, the Vegetarian Advocate, which had not gone down well with the Bible Christian President of the British Society, due to its strong ‘vegan’ leanings. In August 1850 his last issue ended with a lengthy article by Sylvester Graham entitled ‘Butter and Cheese’, not surprisingly arguing against the use of these products.

The London ‘vegans’ and the Manchester-based ovo-lacto Bible Christians continued to differ. In 1854 the Manchester journal derisively suggested this was all caused by Sylvester Graham:

“Mr. Graham, in his Science of Human Life, has been the leading advocate of the adoption of the Vegetarian system in dependence upon fruits, farinaceous [starchy] substances, and vegetable products alone, without the addition of animal substances, such as milk, butter, eggs, or cheese . . .”

They don’t seem to have been aware that Graham had died in 1851, or that much of his original inspiration had come from the highly respected Dr. William Lambe FRCP.

For more on William Lambe see my e-book World Veganism – past, present and future,  now been updated to include the above blog, and more. You can download it for free, or replace your existing copy at: www.ivu.org/history/Vegan_History.pdf (6mb)