[updated for 2012] As a musician myself, I had often noticed that there seemed to be a lot of other veg musicians around. So a couple of years ago I did some historical research and put the results online. I called it 'East Meets West and West Eats Meat' which is borrowed from a 1969 Indo-Jazz album featuring Indian sitar-player Ravi Shankar and some American jazz musicians.

No doubt there have been countless Indian veg musicians for centuries, but it's not easy for me to find individual names before Ravi Shankar became famous in the west. If any Indians reading this can help then do get in touch.

Meanwhile our trail begins with European classical music in the 19th century, and the first name that comes up is the inevitably controversial Richard Wagner. Before anyone hits the comments button, please read the article about him on ivu.org - just click on his name from the page linked below. It shows that he was never vegetarian himself, but a lot of other musicians were because he said they should be... Whatever conclusions you come to, we can't just ignore him in this historical survey. 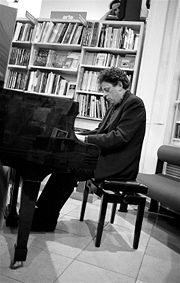 On the website I've tried to look at the connections between all these people - who knew who, and how they influenced each other. Later classical composers and musicians were influenced towards veg*ism by Theosophy and eastern religions, along with all the usual reasons we have today. (photo right is American composer Philip Glass) 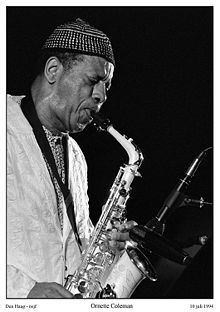 The second section deals with Jazz musicians - Texas in 1949 seems an unlikely place for a long-haired African-American vegetarian, but that's where Ornette Coleman came in, age 19. Many more 'modern' jazz veg*ns soon followed, reaching a peak in the 1960s, after which it gets increasingly difficult to separate all the musical genres, with a lot of fusions going on. (photo left: Ornette Coleman) 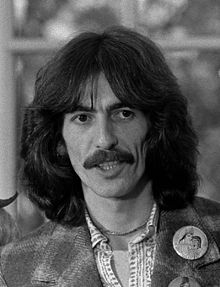 The third group is blues, country, rock, pop etc. - we can trace veg*ism among those musicians back to 1940s USA as well, but most of the early veg rock musicians were in England. Very soon there were huge numbers of them on both sides of the Atlantic. The biggest problem with this group is their inconsistency, many were veg*n at some point but didn't always stick to it for long. (photo right: George Harrison)

This is meant to be a historical survey, it doesn't deal much with current pop/rock stars as they come and go much too frequently - you can find plenty of those in the VegSource 'celebs' section. If anyone can add anything please use the comments below.

To read all the details go to: www.ivu.org/history/music.html