Neer cast a clout 'til May be out - Veg*ism, Wildlife and the Environment

The title is an old English proverb, subject to endless debates about what any of it means (try googling it). I wrote some of this at the end of May 2010 – and as the May blossom and the month of May were both now out it seemed to be time to start some clout casting....

May blossom is the mass of tiny flowers which cover the Hawthorn trees. In this part of England it appears in late May and stays into early June - and we have a lot of Hawthorn around here, looking like spring snow on the trees. I notice it more when I'm photographing wildlife - and I'm increasingly wondering how long before another developer destroys a lot of it.

We should all know, by now, that the livestock industry is making a huge impact on climate change. But being vegetarian, and more so vegan, can also make a significant difference to the environment in other ways, including the survival of wildlife - wild plants as well as animals, birds and insects.

The damage done by grazing livestock is enormous, mainly through the destruction of habitats and extermination of competitor species. No doubt meat-eaters will point out that growing large areas of crops also destroys habits and 'pest' species - but they conveniently overlook the fact that it takes vastly more land, and water, to produce a pound of meat, compared with a pound of soy. 90% of the world's soy production is used for animal feed, if it were eaten directly by humans there would be more than enough to feed the world, and far more habitat left for the wildlife.

My personal involvement with wildlife began by chance. The English city my parents were living in was badly damaged during WWII. New houses were being built out of town, so they moved out and I spent my childhood surrounded by countryside. Gradually ever more houses were built and the countryside disappeared, but I was one of the lucky ones who lived there before it was destroyed.

I took all the photos on this page since we first moved to this part of the countryside in 2001. [right: sometimes the names are as interesting as the plants - top is 'Devilsbit Scabious', and below 'Common Toadflax' both on local nature reserves]

My parents moved into the countryside when I was 3 months old, and my earliest memories are a large area of open land near our house, just a left-over patch from where the new houses had been built. It had a meandering stream, trees to climb, a swamp with frogspawn and dragonflies - and lots of birds, insects, fish and wild flowers. Several other young families made the same move away from the bombed city (this was late 1940s) so there were plenty of other kids my own age to share this natural adventure playground. The stream had a lot of bends, with fast/slow and deep/shallow areas, perfect for what was later called bio-diversity.

I must have been about 8 or 9 when someone in authority decided this was a health and safety issue. They sent some workmen along to build a wooden fence between our houses and our 'wilderness' - it didn't take us long to knock it down again as soon as they were gone! My first encounter with 'them'.

They tried to fence it again from time to time, but we always got through - it would have been fair enough if they were trying to protect the wildife, but 'they' didn't think like that in the 1950s, it was just seen as a dangerous wasteland. Meanwhile I read every book I could find about the wildlife, and in our gang soon became 'the one who knows what things are called'.

Paul McCartney tells a similar story in his autobiography 'Many Years from Now'. He is just a few years older than me and from a different bombed city, but that early experience seems to have had a similar impact on both of us, ultimately leading to the end of eating our fellow-animals. No doubt many more of our generation went through a similar encounter with the natural world.

When I was 13, in the early 1960s, I got my first guitar and was distracted for some years from the wildlife - which turned out to be just as well. The authorities gave up with the fences and turned to their 'final solution'. They sent in a digger to cut a dead straight trench and fill in the meandering stream. Then they bulldozed the small hills into perfectly flat parkland, with closely mown grass. The wildlife vanished, and years before 'environmentalism' became trendy I began to understand what ecological vandalism looked like.

While all that was happening our patch of countryside was rapidly turning into a giant housing estate with ever more motor vehicles polluting the air. By the mid 1970s I was living back in the city, but it had sprawled so much that there wasn't really much difference by then.

I eventually returned to the city but never lost the fascination with the countryside. Some years ago I was doing some voluntary work on a local wildlife reserve when I mentioned to a colleague that it was just like where I had grown up. That was when it dawned on me that the nature reserves were the only places in the south of England left like that. It was time to move.

My wife, Hazel, had a more authentic country childhood, in a small village where her family had lived for generations. But that too had been swallowed up by the urban sprawl. We looked further north and found a

relatively unspoilt area close to the border with Wales, and moved to a small village there in April 2001.

Right: a group of Starlings making a splash in the birdbath, both in our back garden:

The photo below is the back of our house, from across the field one summer, the arrow points to my study window, where I'm sitting writing this: 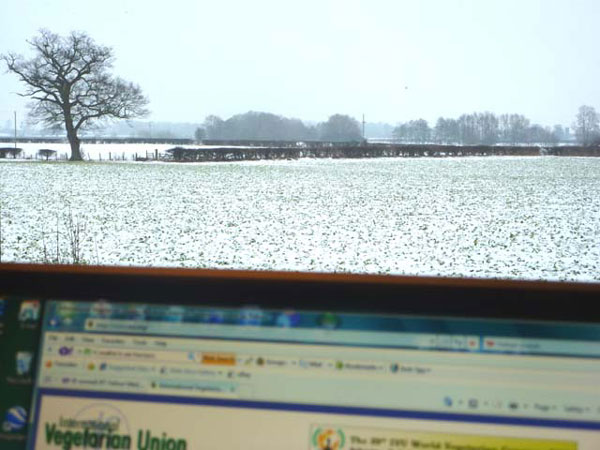 Right is the view over the top of my computer monitor, looking back the other way from the photo above, during a recent cold winter.

The pressure from developers is relentless, it is much easier to make a profit from building on green fields than from cleaning up polluted ex-industrial sites. The owner of the fields all around us have tried to cash in by getting planning permission to build on them, which would hugely increase their land value. We're fairly sure they won't get it at this time, and it will be safe for at least another 15 years, but the endless destruction seems almost inevitable.

Maybe we're just being selfish, trying to hang on to our little patch of countryside when people need houses. But the wildlife needs to survive somewhere too, and the space is shrinking all the time.

A couple more from my office window, moving thru the seasons: 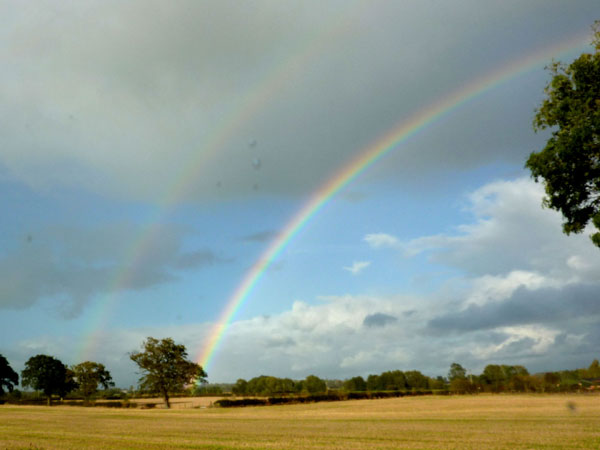 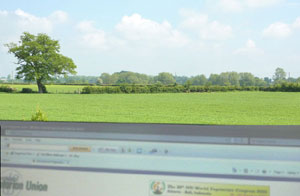 Time seems to pass more slowly in the countryside during the summer. The rush of spring flowers has gone, and the birds can find plenty of food under cover in the hedgerows. We actually see a lot more birds in the winter as they come nearer the houses looking for food, and there are not many leaves to hide under.

This was the view from my study window, over the top of the computer, early in June:

Not much dynamic activity, though I've seen some Hollywood films that felt like they were slower. The wheat in the field was looking like long grass, but a month later, early July, it was beginning to look like the real thing: 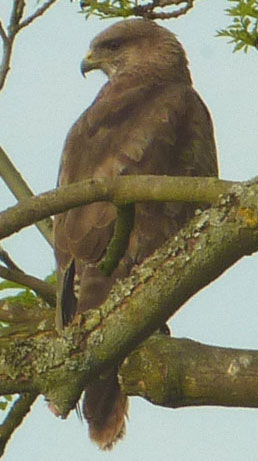 But we have had some activity, a lot more Buzzards than usual, circling overhead in June - looking for any young rabbits foolish enough to wander too far from the burrow.

The Buzzard on the right very obligingly posed on the tree right outside. They're just medium sized as hawks go, but you wouldn't want to be on the receiving end of that beak.

The bright orange wild flowers below have several country names, including 'Orange Hawkweed', as the hawks are supposed to eat them to improve their eyesight, though we've never seen the Buzzards eating ours... 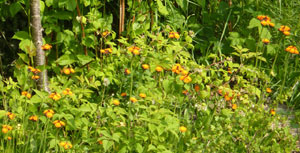 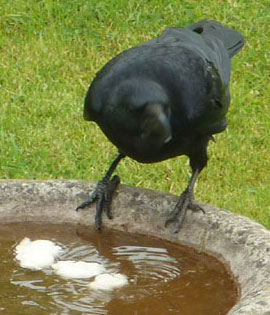 Some birds are definitely smarter than others. We have a Song Thrush that regularly uses the same stone to hammer snail-shells to break them open - I'm still trying to be quick enough to get a photo, maybe next time. But one that I haven't heard of elsewhere is the Crows dunking their bread in the bird-bath.

They find the bread in the neighbors' gardens (we don't eat white bread!) - but it tends to dry out, so they bring it over to ours to soak it for a while, then take it back to the nest for the chicks.

I can't imagine that white bread is any healthier for baby crows than it is for us, but they seem to like it.

For size comparison the two bundles of feathers below were part of a large family of recently hatched Sparrows making a splash in the same bird-bath: 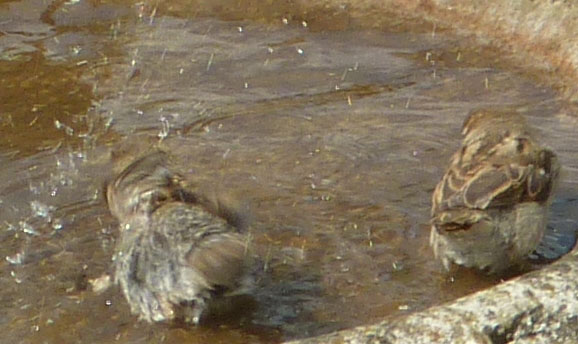 For my facebook albums of wildlife photos around the world, go to: www.facebook.com/#!/john.davis.9279/photos_albums