Last week I had the opportunity to drop into the Vegan Camp, which has run for a couple of weeks every year, in all parts England, Scotland and Wales, since 1981. This year it was near the Lake District in North West England.

Over those thirty-one years it has grown into something of a national institution, a simple but effective idea which could work for groups in other countries.

The camp’s origins seem to have followed from the thinking behind the Vegan Views magazine, which was first published in 1975, and has appeared quarterly for 37 years. There is a low price for print/post version, but these days the free online PDF version is equally popular and gaining international interest. 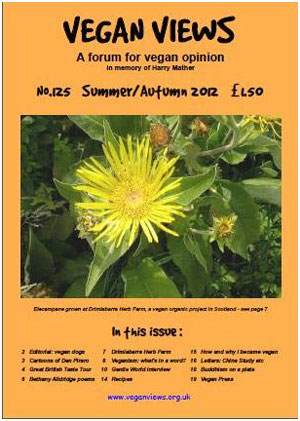 Vegan Views (a member of IVU) has always supported the work of the Vegan Society (also a member), but the founders felt a need for an independent magazine which could take more in-depth, and perhaps more controversial, articles and opinions. For more info, and free downloads, see www.veganviews.org.uk

In 1981 the Vegan Camp was started as another independent organisation, overlapping with Vegan Views, but quite separate. It is open to anyone who wants to spend a couple of weeks on a campsite with a lot of vegans – it has never been restricted to committed vegans, though they have to be for at least those two weeks of course. The idea took off and attracted so many participants that numbers eventually had to be limited. Below is a view of half of the 2012 camp, the big communal tent with a vegan food shop and meeting space was just off to the right.

Most at the camp bring their own tents, but some this year stayed in the caravan (trailer) site across the road, and some, like me, stayed in a nearby veg B&B. Many stay for the whole two weeks, others for any time they wish, I just dropped in for a couple of days.

The campers include families, so there were plenty of children around, along with some older couples and younger singles, just anyone who wanted a vegan holiday. The organisers say it is not meant to be any sort of campaign, just a holiday, but for vegans who are isolated in their local communities it is a great source of support to get them through the rest of the year, and a good intro for wannabe vegans.

The activities include day trips to local attractions, physical outdoor activities, and home-made evening entertainment, all down to whatever anyone wants to organise, with plenty of choice so mostly smaller groups taking up each option. While I was there I went to a talk in one of the caravans, a karaoke session in the bar, and then a group day-trip over to Keswick in the Lake District, where we took a boat trip around Derwent Water, a large lake surrounded by mountains. It was getting windy, the water was choppy, and those in the open part of the boat were getting wet: 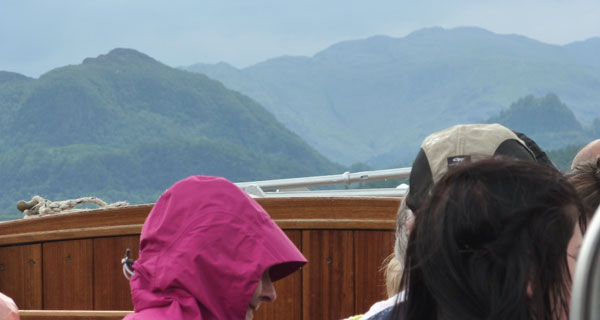 On the way back we stopped at Castlerigg, a stone circle estimated to be 4,500 years old, on a hill-top surrounded by mountains. The rain had stopped for a while but the clouds were down over the mountain tops:

If anyone wants to go to the 2013 camp in Cornwall, or is interested in doing something similar in another country, you can find a lot more details at: www.vegancamp.co.uk