Are you a positive or a negative veg*n?

If we ask meat-eaters what they think 'vegetarian' means, most would probably say 'someone who does not eat meat' - but that is not at all how I see it.

I'm a positive veg*n, I eat plant foods. I define myself by what I do, not by the negative of what I do not do. If we define ourselves as a negative of others, then we are saying that they are 'normal', and we are abnormal for abstaining.

When I was in Indonesia last year I went on a great day-trip with a bus full of veg*ns from all over Asia. The driver didn't know my name and at one point referred to me as 'the European guy', which was fine - he could have called me the 'non-Asian guy' as I was the only one, but that would have been odd, maybe even slightly offensive. So why do veg*ns collaborate with the flesh-eaters in defining ourselves as 'non-meat-eaters'.

I do not 'abstain'. I do not 'avoid'.  I am not 'meatless' or 'meat-free'. I simply make a positive choice to eat, and to wear, the things I prefer, and my health, the animals, and the planet, all benefit from that choice.

[the photo right is George Jacobs, chair of the IVU Council, with a friend in Dresden, Germany, 2008]

By way of comparison, when I was growing up in the 1950s and 60s most people smoked tobacco. They branded me as a 'non-smoker' but I didn't see it way, I just thought it was disgusting and unhealthy , and I certainly did not consider my preference for clean air to be some sort of self-denial.

So when I was offered a cigarette I asked them why they did it - but  they couldn't defend it of course, as the real reason they smoked was just because everyone else did, and they thought it looked 'cool' - encouraged by film star images and mass advertising.

I like the graphic below as a representation of the image and the reflected reality as I always saw it (courtesy of www.smokingadverts.com ) 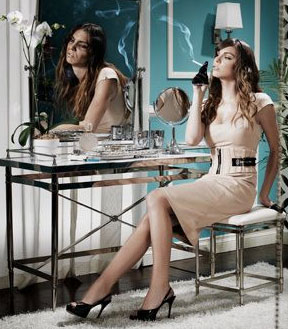 Even in the 1980s I had to fight to get a ban on smoking in the office where I was based. One otherwise intelligent colleague couldn't believe that we did not allow anyone to smoke in our house, and tried to brand me as anti-social for that!

In July 2007 the British government finally caught up with some other parts of the world and banned smoking in all public places. So now I'm finally vindicated as the normal one, and the smokers have to stand outside in the rain to indulge their perversion.

I can also remember Frank Sinatra singing about 'one for the road' - but now drinking and driving is universally considered a social evil. So things can change. Maybe one day we'll get to the point where flesh-eating is seen as the abnormality that it is - meanwhile we can at least set a better example of how we define ourselves.

Ultimately we should be aiming to abolish words like 'vegetarian' and 'vegan' completely - normality does not need a label, it's the flesh-eaters who should be branded as abnormal. And in the long term we do not want green labels on supermarket products saying 'suitable for vegetarians' - we want blood-red labels

on anything which is non-veg. The Indian government tried to do exactly that, but they kept the green, and against predictable opposition the red one got diluted to brown, but at least they do have both (see right).  That will take time for the rest us of course, so for now we have to live with the reality of being a minority, but the way we use language can help towards those long term aims.

The International Vegetarian Union obviously does not have the power to define words, that's just down to common usage, and dictionaries trying to keep up as they change. But we can decide how we define our own membership (groups only, IVU does not have individual members), and we can set a better example.

The above was written in July 2010. In May 2011 it was proposed to make our definition positive and to return it nearer to the original. The proposal was:

"IVU defines vegetarianism as a diet of foods derived from plants, with or without eggs, dairy products, and/or honey."

The last clause being an inevitable compromise. This was to replace the old negative definition:

"For the purpose of membership of IVU, vegetarianism includes veganism and is defined as the practice of not eating meat, poultry or fish or their by-products, with or without the use of dairy products or eggs."

Making the change required a ballot of all 120 IVU member organizations around the world, and as many of those have thousands of individual members who were also consulted. The proposal was supported in May 2011 with a 95% majority.

Later update: Further to the point below about fungi/algae etc - I think most ordinary people would describe a 'plant' as something that grows in the ground and cannot move around of its own accord. Sounds like a mushroom to me... the fact that academic biologists have recently deemed that fungi and no longer in the kingdom of plantae is not going to stop supermarkets selling mushrooms in the fruit and veg section.

wikipedia: "Herbivores are organisms that eat plants." - seems simple enough - would anyone really define a herbivore as a 'non-carnivore', or 'an animal that doesn't eat meat' - with a long list of things excluded from their diet?