A few years ago we rarely had more than one international veg event per year, and nearly all in Europe or North America – last year there were at least nine of them, on every continent of the world (well, maybe not Antarctica yet….).

By ‘international veg event’ I mean public events which deliberately encourage attendance by visitors and speakers from more than one country. There will, of course, be many other national or local events that happen to have an occasional visitor or speaker from other countries – I gave several talks to groups in other countries myself last year, but this is about something bigger.

The first ever international veg event was way back in 1889 when the German societies invited vegetarians from other countries to a few days in Cologne. They had talks, lectures and boat trips on the Rhine, and a similar mixture has continued ever since.

The International Vegetarian Union was founded in 1908 with the primary aim of bringing together vegetarians from as many countries as possible. The cultural exchange and networking opportunities proved invaluable, and a lot of fun. By the 1970s the idea of regional events had begun to take off, attracting many more visitors who were unable to travel the longer distances. But nearly all were still in Europe and North America until quite recently.

The IVU Facebook page now has a collection of photo albums covering every international veg event since 1908 – have we missed any? Do you have more photos? See the link at the bottom of this page.

By 2010 these veg gatherings were being held all over the world. All the photos on the right were taken between October and December 2010 – from the top: Indonesia, India, Kenya, United Arab Emirates and China.

This is what IVU member organisations did in 2010, and where the participants came from:

As recently as 2003 there was just one international veg event in the whole year – assuming some Canadians made it to the NAVS Summerfest that year - NAVS has always set out to be North American not just USA.

So why has this idea suddenly gone global?

Six of the above events were the direct result of work by our amazing team of IVU Regional Coordinators.  Below are the people doing all this work – and all unpaid, they don’t even get expenses:

Below – our great IVU team in action – in the last few years they have organised at least 16 public international veg events between them: 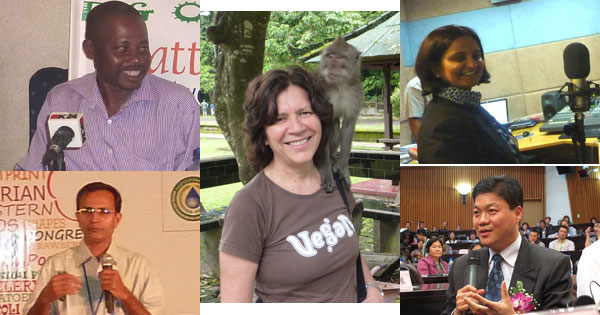 Some albums from the 1980s and 90s only have one photo of the location – were you there? Can you help by sending more photos?