Vegans are Vegetarians too

The man who, with friends, invented the word ‘vegan’ in 1944 was very clear that this was a part of the vegetarian movement, and Donald Watson remained clear about that up to his death in 2005, at the grand age of 95.

In recent years some vegans have tried to claim that veganism is completely different to vegetarianism, sometimes with considerable hostility to other vegetarians – Watson would certainly be turning in his grave at that. Some extracts:

". . . we shall, of course, say strongly why we condemn the use of dairy produce and eggs. . . there need be no animosity between ourselves and the 'lactos'. We all accept that lacto-vegetarianism has a well appointed place in dietary evolution . . . . though our friends the lacto-vegetarians may reject our ideas if they wish, we hope they will not reject us for stating them."

THE VEGAN WAY OF LIFE – by Fay K. Henderson, Secretary of The Vegan Society, in The Vegetarian (an independent journal) – issue 1, Spring 1947:

"The word Vegan has been brought into use since the formation of The Vegan Society in November, 1944, and it denotes a person who abstains from using animal products as food. Veganism is actually vegetarianism carried logically to a further stage."

The International Vegetarian Union was re-convened in 1946 after the war years, and The Vegan Society promptly joined.

VEGANISM – a talk given at the 11th IVU World Vegetarian Congress, July 1947:

"Mr. DONALD WATSON (Leicester), said that the vegan believed that if they were to be true emancipators of animals they must renounce absolutely their traditional and conceited attitude that they had the right to use them to serve their needs." [beyond just food…]

Photo right: Watson front row middle. His co-founder Elsie Shrigley was in another part of the big group photo at the 1947 vegetarian congress. Immediately behind Watson is the President of the UK Vegetarian Society.

"There has been much conjecture as to the origin of the word VEGAN and its meaning. . . in the first instance it was an attempt to get beyond the rather negative phrase "non-dairy vegetarian"  . . . being both the beginning and the end yet implying hopefully that what starts as vegetarian may finish as vegan."

[Ms. Henderson then explained how the group originally wanted to remain within the Vegetarian Society, as a non-dairy section, but this was not agreed so a separate society was reluctantly formed.]

". . . The Society has grown steadily in three years to a membership of about five hundred individuals . . . and has recently joined the International Vegetarian Union."

". . . It is a matter of some concern and regret that the modern tendency among reform groups is to break away from main societies and work independently for some slightly varying ideal. . . . This condition must be remedied if Vegetarianism is to develop the full force of its revolutionary powers. The closest co-operation and unity is therefore essential."

SHOULD THE VEGETARIAN MOVEMENT BE REFORMED? by Donald Watson in The Vegetarian, Spring 1948:

"The movement should grant to the individual the right to judge how best to meet each personal problem as it arises, and there should be no inferior section reserved for those who cannot live consistently according to the movement's definition. Loyalty cannot be measured merely by the standard of consistent practice attained, nor can a person's value to the cause be assessed in this way. Difficulties are greater for some than for others."

". . . The time has come to revise the definition of vegetarianism . . . Vegetarianism, should mean the practice of living without food from animals."

In 1951 The Vegan Society changed its rules to clarify that veganism was about more than just food, specifically excluding any use of animals in any way at all. In practice this just codified their existing ethical values and the vegans remained firmly within the vegetarian movement. 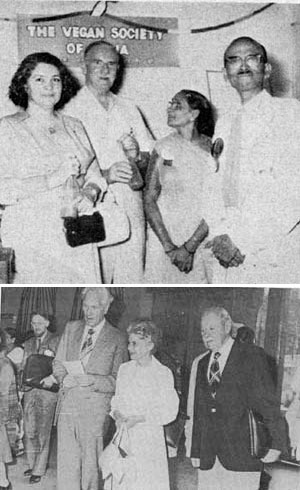 Photos: top- leaders of The Vegan Society of India at the IVU World Vegetarian Congress in India, 1957.

In 1975 the first IVU World Vegetarian Congress to be held in North America, and the biggest outside of India, was masterminded by Jay Dinshah, founder and president of the American Vegan Society.

Photos bottom- Serena Coles, President of The Vegan Society, flanked by the  Presidents of the International Vegetarian Union and the Vegetarian Society UK – IVU Congress, 1977. In the background is Brian Gunn-King, General Secretary of IVU and a member of the Vegan Society.

In 1997 the International Vegetarian Union started putting recipes on its website – now over 3,000 in English and many more in other languages. These have always been completely vegan, as is everything else on the website.

In 1998 it was agreed that in future all food at all IVU Congresses must be completely vegan. Donald Watson lived long enough to witness that, and naturally approved of it.

In 2010 we finally proved the real origins of the word ‘vegetarian’ – and that the first people to call themselves that were in fact vegan, in ethics as well as diet. Sadly Watson had passed away by then, but he would certainly have liked that one.

IVU currently has about 120 full voting member organisations, including 22 with the word ‘vegan’ in their title – and many more vegetarian groups now only promoting food derived from plants. Another 114 calling themselves ‘vegan’ have requested the free listing in the IVU public database, along with hundreds more only promoting plant foods.

Donald Watson never wanted to leave the Vegetarian Society, and never did. He never wanted to invent a new word, or create a new society. Initially he just wanted vegetarians to stop using animal foods – and the course of history is clearly going his way.

Full more details of the first Vegan Society and its role in IVU, with links to all original sources: www.ivu.org/history/societies/vegansoc.html