from England to California

A couple years ago Hazel and I went to Los Angeles and San Francisco. This is an update of the blog I wrote at time as it might provide some ideas for those heading for the IVU events in California in October.

This was mainly a personal trip for our anniversary (ie not paid for by IVU!), but we always meet up with lots IVU friends wherever we go - here's what we did....

Thursday February 11, 2010 - left Birmingham in the snow for a short hop to Paris - the plane stopped in the middle of the airfield and we had to get off and walk across to a bus - it was minus 3C and snowing... then we had to go through the miles of security checks again. With that and the snow everything was running late so we were able to make the connection as that was late too.

Arrived in Los Angeles and met the Nelson family - Jeff, Sabrina, Nina, Randa and Willie, who looked after us amazingly well for the next few days. See VegSource on Facebook for lots more about this great vegan family. I've been working with Jeff for 12 years as the IVU website is hosted by VegSource, but we had never been able to meet before, so this was a very special occasion.

Friday 12 - Jeff gave me a lift to pick up a rental car in the morning and I tried to remember to drive on the wrong side of the road while following him home again.

Lunch was at the home of Zel and Reuben Allen (of VegParadise: www.vegparadise.com ) in Granada Hills - joined there by Eric and Diana ( of HappyCow: www.happycow.net ) and Dorit & John (of Serenity Foods: www.serenityspaces.org and the Green Lifestyle Film Festival www.greenlifestylefilmfestival.com ) - great food and company for the afternoon, and in the evening an entertaining trip with the Nelson family to a local vegan restaurant.

Sat. 13 - to Santa Barbara to see our old friend Gabriel Buist who moved there from England last year. Lunch in a mostly vegan cafe then down to the beach to meet Gabriel's son and his family who also live in the area, then to the Mission - the oldest building in SB - where we did the tour and sat in on a mass for a while. Right is the view from Gabriel's balcony, and below is the Mission: 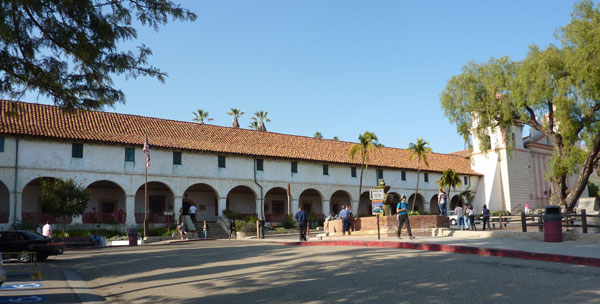 On the way back we used HappyCow and the GPS system the Nelsons lent us to find a vegan restaurant in Ventura, Mary's Secret Garden, which turned out to be a delightful place.

Sunday 14 - to Santa Monica to meet up with Eric of HappyCow again, walked along Venice Beach and lunch at yet another vegan cafe called 'Seed'.

Right - a wave on the rocks at Venice Beach:

Below: Eric and Hazel on Venice Beach, looking north toward the hills of Malibu:

Took the scenic route back via Malibu and over the mountains through Topanga Canyon.

In the evening recorded a video interview with the Nelsons twin daughters Nina and Randa. 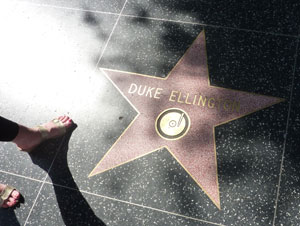 Monday 15 - to Hollywood to see the 'walk of the stars' etc, - and discovered a new vegan cafe that the locals hadn't found yet ( myveganhouse.com ) then over to Dorit & John in West Hollywood for a taste of Serenity Foods, and very good it was.

Tuesday 16 - to Burbank airport for the one hour flight to Oakland - picked up another rental car, with completely different controls.... and drove to Marin County, north of San Francisco, where we stayed with Jim & Mary-Armour Nelson - Jeff's parents who are in their 80s and a wonderful couple, Jim is a writer. A delightful Dinner in the evening with more of the Nelson family from the bay area. 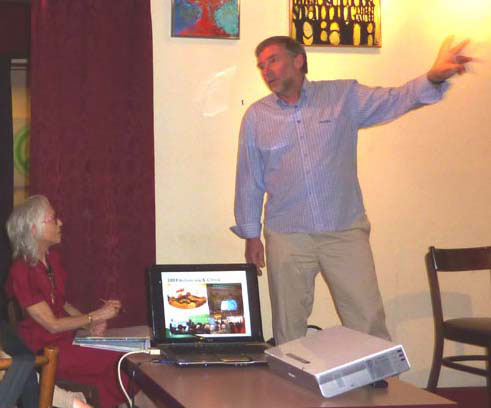 Wednesday 17 - to the Haight-Ashbury area of San Francisco for some sightseeing before our meeting at the Red Victorian where there was a vegan buffet followed by myself with a presentation on 'Vegetarianism from a World Perspective' - a good audience who seemed to be very interested, mostly from the San Francisco Vegetarian Society ( www.sfvs.org ).

Also met Isaac Dikeocha for the first time - our former IVU Regional Coordinator for Africa, who was in SF for a while. He took the photo on the right, with Dixie Mahy, President of SFVS keeping an eye on me.

After the talk I did a radio interview with Bob Linden of GoVeganRadio( www.goveganradio.com ), which went out in SF on saturday morning, and syndicated in LA on sunday.

Thursday 18 - a visit to the Marin County farmer's market in the morning. Afternoon down to San Francisco for more sightseeing, China Town, Union Square, drove down one of those absurdly steep streets etc., then to the Millennium vegan restaurant , very upmarket and considered by many to be the best in SF, maybe even the best in the world.

We had dinner with Larry and Ann Wheat, the owners, and Dixie, Stan and JC from SFVS - Larry and Ann did a superb 'family style' spread of almost everything on the menu. Below at the Millennium: l-r - Ann, Larry, Hazel, JC (Joseph Cadiz, SFVS treasurer), me behind Stan (Dixie's husband), and Dixie Mahy (President of SFVS)  ( www.millenniumrestaurant.com )

Friday 19, to the (vegan) True North Health Clinic in Santa Rosa ( www.healthpromoting.com ), to meet another old friend and IVU councillor, Gerry Coffey, who was being treated there ( www.ivu.org/members/council/gerry-coffey.html ). We were also able to sit in on some therapy sessions, attend a talk by one of the doctors, and chat to several of the doctors during they day. A great place.

In the evening back to San Francisco for another SFVS meeting at the Maharani Indian restaurant - a vegan buffet followed by a Bollywood film. I gave a short intro about our visit to the Bollywood studios in Mumbai back in 2004.

Saturday 20 - a slower weekend ... took the scenic tour around Marin County: Muir Woods to see the giant Redwood trees, then to Stinson Beach and back through more redwoods.

Sunday 21 - to the mostly-raw-food Cafe Gratitude ( cafegratitude.com )  in San Rafael for lunch, one of their eight locations in California.

In the evening we had a party for Mary-Armour's 83rd birthday. Lots of the extended family were there and it was a real privilege to share this time with them all.

Right: Mary-Armour at the farmer's market:

Monday 22 - back to the Cafe Gratitude in San Rafael for an all-too-brief meeting with eco-feminist writer Marti Kheel, who sadly passed away the following year.

Then on to San Francisco airport for the long-haul home, via Paris again. We drove the last hour and a half home from Birmingham in the snow and it was snowing even more heavily by the time we arrived. Quite a change from sunny California....