Gandhi - and the launching of veganism

Gandhi is not the first name that vegans might think of as helping to launch the movement, and yet he did, on November 20, 1931, in London to be precise.  He didn’t call it ‘vegan’ of course, but it wasn’t long before others came up with the word to describe what he was talking about.

We need to go back a bit – in 1888 the London Vegetarian Society split from the original UK society, based in Manchester, to form a second national group. In 1891 Gandhi was a law student in London and joined their committee for a while, later describing this in some detail in his autobiography.

On leaving India the young Gandhi had made a religious vow to his mother not to eat meat while he was in London, and he kept to it with great difficulty. One day he found a vegetarian restaurant and on the way in picked up a booklet by Henry Salt entitled A Plea for Vegetarianism (1885) which persuaded Gandhi that being vegetarian was important in its own right – and in which Salt wrote: “…even dairy produce is quite unnecessary”.

Salt’s next book, in 1892: Animals' Rights, Considered in Relation to Social Progress is generally recognised today as groundbreaking.

In 1931 Gandhi, now world-famous for his non-violent resistance in India, went to London to meet the government, and while he was there agreed to give a talk for the London Vegetarian Society, with the title of ‘The Moral Basis of Vegetarianism’.

The photo on the right is Gandhi at that meeting, next his old friend Henry Salt who had founded the Humanitarian League and written 40 books to promote his ethical ideals. By 1931 Gandhi wanted something different, after some opening remarks he said:

Whether Gandhi was statistically correct in this claim is still the subject of much debate today. But he wanted to go further:

“I would give up milk if I could, but I cannot. I have made that experiment times without number. I could not, after a serious illness, regain my strength unless I went back to milk. That has been the tragedy of my life. But the basis of my vegetarianism is not physical, but moral. If any said that I should die if I did not take beef-tea or mutton, even under medical advice, I would prefer death. That is the basis of my vegetarianism.”

Milk drinking a ‘tragedy’ - and this to an audience of mostly ovo-lacto-vegetarians.  In his autobiography Gandhi says he gave up milk in 1912 (in South Africa) but six years later contracted dysentery (back in India) and was reluctantly persuaded to take goat’s milk, which he then did on and off for life, but he never returned to cow’s milk (a significant distinction in India) - soy milk was still largely unknown outside of East Asia at that time [see comment added below].

He also wrote elsewhere:  “Milk is an animal product and cannot by any means be included in a strictly vegetarian diet . . . I am convinced that in the vast vegetable kingdom there must be some kind, which while supplying those necessary substances that we derive from milk and meat is free from their drawbacks, ethical and other.” ( source below).

But Gandhi had been just warming up in this talk to the London Vegetarian Society, finally making his point:

But only a few years earlier in his 1925 autobiography Gandhi described an issue that arose back in 1891, while he was on the LVS committee. He objected to action against a particular member because: “. . . it had nothing to do with the declared object of the Society, which was simply the promotion of vegetarianism and not of any system of morality.”

He knew very well that all Vegetarian Societies kept the diet itself as their core function, and would not discriminate against any members just because they had different reasons for adopting the diet.

And yet he clearly wanted something which would bring together those who were motivated by morality, and who shared his objection to dairy products (and eggs of course). His talk was published in full in the various vegetarian journals where it was widely read by the minority of members who had always kept to their ethically-based plant-only diet. Gandhi certainly didn’t invent that concept, but such outspoken support from a major world figure, with Henry Salt by his side, must have boosted their confidence enormously.

Within a few years they were arguing for a distinct ethics/morality based ‘non-dairy’ section within the Vegetarian Society, but with slow communications, and the 2nd World War intervening, it took until 1944 for that proposal to be rejected. They responded by creating a new society, on exactly the lines that Gandhi had proposed - inventing the word ‘vegan’ to name it.

The photo below shows the1931 meeting coming together, just before Gandhi spoke ( no chairs...) The December 1931 issue of Vegetarian News (London) printed the full text of Gandhi’s talk, along with a descriptive article which stated that about 500 were present and that Henry Salt also spoke: 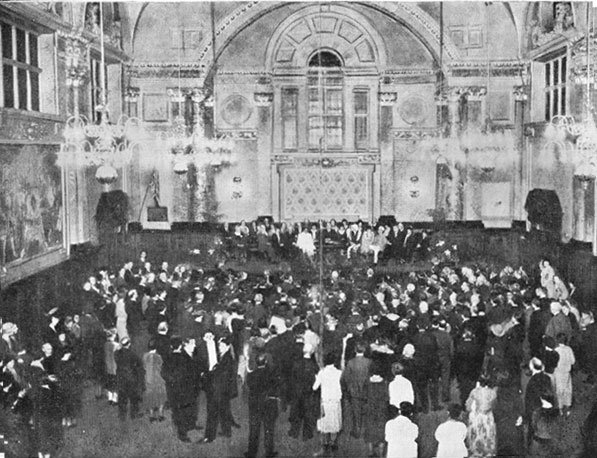 See also: ‘The Moral Basis of Vegetarianism’ – a compilation of articles by Gandhi, including the full text of the talk above, some others originally in Hindi, translated and published in 1959 – with the first section very specific about milk and eggs (PDF 144k)

Much more about Gandhi and vegetarianism

Salt in turn was influenced by, and wrote several books about, the poet Percy Bysshe Shelley. See Shelley - the first celebrity vegan

The following was sent by Bill Shurtleff of the Soyfood Info Center in California:

Few people are aware of Gandhi's interest in and work with soyfoods in India.

On 24 Feb. 1929 George Washington Carver (Tuskegee, Alabama) wrote a letter to a Dr. Charles Freer Andrews, an Anglican minister who worked closely with Gandhi, first in south Africa and later in India. He concludes: "A peanut emulsion can be made in the same way as that recommended for the soy bean, and is a little richer in food nutrients."

Andrews had previously visited Carver in Tuskegee in Feb. 1929 for 10 days and learned how to make soymilk and how to develop a healthful [vegan] menu that contained soymilk.

Carver apparently introduced Gandhi to soyfoods. By Feb. 1929 Gandhi almost surely knew about soymilk and had probably made and tasted it in India.

Gandhi first began to write about soyfoods, in order to introduce them to India, in Sept. 1935, in Harijan.

I find these writings both accurate and inspiring - always in the context of a vegetarian diet striving to be vegan by finding an alternative to dairy milk.

This full story is available free of charge in our recent PDF book "History of Soybeans and Soyfoods in South Asia / India (1656 to 2010)" on our website: http://www.soyinfocenter.com

Throughout India (which is now the world's 5th largest soybean producing country), Gandhi is considered to be "The father of soyabeans in India." - Bill Shurtleff

For vegan history, see my free e-book: ‘World Veganism – past, present and future.” You can download it for free, or update your existing copy at: www.ivu.org/history/Vegan_History.pdf (6mb)