[updated May 2012] Westerners often seem to be surprised to hear that there are millions of vegetarians, indeed vegans, in China, but this is nothing new. Way back in the 1880s the British and French Vegetarian Societies printed reports from Christian missionaries who were not themselves vegetarian. However found they had to stop eating meat while they were in China, because the Buddhists they met regarded the Christians as barbaric for eating animals. They also reported on the habit of eating soy beans, unknown in the West at that time, and how they made bean-curd which the French report called 'too-foo'.

Not all Buddhists are vegetarian, and both Buddhism and vegetarianism were suppressed in the more extreme communist era. Today China has become much more open and tolerant (though not completely so of course), with the result that we are now able to meet with vegetarians there.

IVU has had contacts for many years with ethnic Chinese vegetarians in Hong Kong and Singapore, due to the British connections. But somehow we missed the significance of Taiwan until fairly recently - and that country has the second highest concentration of vegetarians of any country, after India, with more than 1,000 veg restaurants.

That lapse was corrected in 2007 when the Asian Vegetarian Union held its 3rd Asian Veg Congress near Kaohsiung, in the south of Taiwan. The event was attended by 7,500 vegetarians, many from across Asia, but most from Taiwan - some of them are in the photo below. 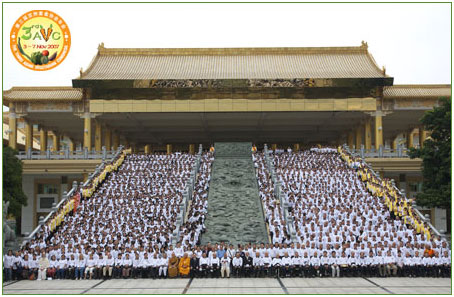 Vegetarians in mainland China had always been more difficult to contact, but there too we have made major progress in recent years. Our main contact for many years has been our Chinese IVU webmaster in Beijing. He has been working on the site for about 12 years whilst local groups have come and gone. We had a group of 20 from China at the 2006 IVU World Veg Congress, but then lost contact again, however it is now much more stable and the 2007 veg congress in Taiwan helped with that.

Shortly after the Taiwan Congress the much-loved President of the Asian Vegetarian Union, Jashu Shah from India, passed away, and the resulting re-shuffle saw the election of Prof. Duo Li from Hangzhou, China, as Deputy-President, more about him below.

After the 4th Asian Veg Congress in Indonesia, November 2009, three of us made the first major visit by IVU to mainland China. We were invited to speak at a half-day International Vegetarian Forum in Xiamen (on the coast opposite Taiwan), part of a huge vegetarian trade fair and Buddhist Craft Fair. We also had an excellent IVU stall in the trade fair.

I was given the honour of being the first speaker at the first ever international veg event in China. The photo below is from that event, l-r:  Dr. Susianto Tseng, IVU Asia-Pacific Coordinator, from Indonesia, myself, our local host ‘Sandra’ from Xiamen and SongMau Lee from the Singapore VegSoc: 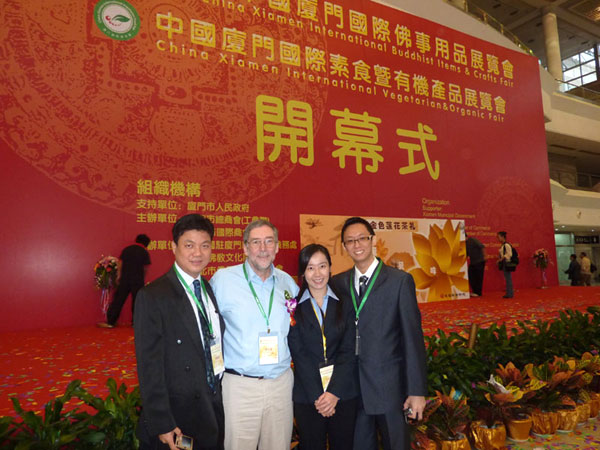 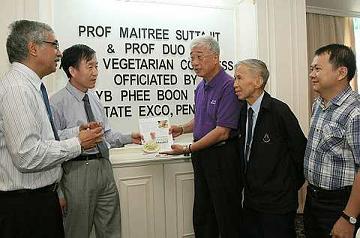 Prof. Li offered to host the 5th Asian Veg Congress in his home city of Hangzhou, for November 2011 – the first Veg Congress to be held in China. The photo right is from a press conference held in Malaysia in early 2011 to promote the congress – Prof. Li is 2nd left, with representatives from Malaysia, Thailand and Indonesia:

Meanwhile, the 2nd Xiamen Veg Fair was held in November 2010, and I was able to put the organizers in contact with Prof. Li in Hangzhou. He was the principal speaker along with others from Taiwan and Singapore. Below is Prof. Li addressing the 2010 Forum:

On November 8/9, 2011 the first ever Veg Congress in China was organized by Prof. Duo Li in Hangzhou, and was a huge success. For more detailed reports see the reports below at:

The First Ever Veg Congress in China (posted Nov. 8, 2011, during the congress): www.vegsource.com/john-davis/the-first-ever-veg-congress-in-china.html

The China Congress - with pictures (the following week): www.vegsource.com/john-davis/the-china-congress---with-pictures.html

Since that first Xiamen forum we have been in contact with more veg trade fairs, businesses, forums, and local groups in several of the major cities in China, including the Shanghai Veggie Club which became a full member of IVU while we were in Hangzhou. Wherever possible IVU will be represented at future events in order to continue to promote East-West dialogue and mutual support.