[written July 2010] The first people who called themselves 'vegetarian' were in fact vegan. This has now been established conclusively with resources not previously available.

We have now shown that until 1847 *all* uses the word 'vegetarian' came from people associated with Alcott House School, on Ham Common, south west of London. And they used it to mean a 100% plant food diet - a 'vegetarian' was simply someone who lived on vegetation. There were, of course, many other people following variations of the 'vegetable diet', most of them adding eggs/dairy products. But we can find no indication of any of them using the word 'vegetarian' before 1847.

So what was Alcott House?

The Alcott House School was opened in July 1838 by James Pierrepont Greaves, a radical educator who had discovered that Bronson Alcott had already had a similar school in Boston, USA. Greaves was sufficiently impressed to open a correspondence with Alcott and to name his school for him. Greaves had adopted the 'vegetable diet' in 1817, and Alcott in 1835, so the school used it from the outset.

In 1841 the school was re-invented as 'A Concordium, or Industry Harmony College', still in Alcott House. The earliest confirmed use of 'vegetarian' was in the April 1842 issue of their new journal, and used in a way which showed that it was already familiar, at least to readers of that journal. 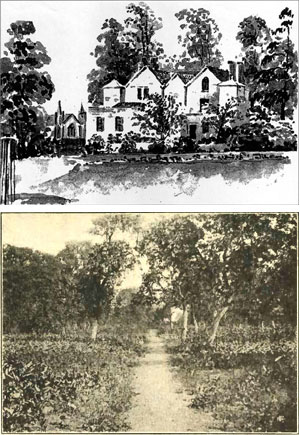 In July 1842, Bronson Alcott arrived from America to stay for four months, and when he left at the end of September he took two members of the Concordium with him to found a short-lived community near Harvard - Fruitlands. He was joined there by his family, including his 10-year-old daughter, Louisa May Alcott, and they continued to follow a wholly plant-food diet. [right: Alcott House and garden - they were largely self-sufficient in fruit and veg]

So why was this research never done before?

The difference now is simply down to being able to search more than 10 million online books in a matter of seconds. In the past it required a visit to one of the great libraries, then searching thru every book to find any mention of the V word anywhere in the text, and it was rarely in the indexes. It's difficult to imagine a smaller needle in a bigger haystack.

We can now easily see who was using the word, and exactly what they meant by it, and we have found *every* use of the word up to 1847.

So why did the meaning of the word appear to change?

We know there were plenty of other people by the early 19th century who were following a - mostly - plant food diet. But we can now clearly show that NONE of them used the word 'vegetarian', in any surviving printed works, before 1847.

Foremost amongst these others was the Bible Christian Church (BCC), founded in Salford in the north of England in 1809. In 1817 some members migrated to Philadelphia, USA, and opened another branch - and were all very clearly using eggs/dairy in significant quantities.

In 1847 Alcott House promoted the idea of a Vegetarian Society, but they were struggling by then and closed in 1848. Its members continued in the positions of Secretary and Treasurer in the new society, and ran it from London for the first two or three years. Meanwhile the Salford BCC had considerable political and financial influence, and one of their members was elected as the first President of the new Society. Without them the Vegetarian Society would almost certainly have folded by 1850. They soon took over completely and moved the Society to the Manchester area, where it is still going strong today.

But they imposed their own definition of the new society: "The objects of the Society are, to induce habits of abstinence from the flesh of animals as food." - which left a lot of things that were not 'flesh', such as eggs/dairy. They didn't specifically re-define the word 'vegetarian', but the name of the society combined with that objective, and soon followed by some strongly ovo-lacto cookbooks, caused endless confusion.

Just 3 years after the Vegetarian Society was founded, in 1850, a serious London medical journal did a 22 page analysis of a typical meat diet vs the heavily eggs/dairy recipes in the new VegSoc cookbook - and concluded "...we find that the so called vegetarian positively consumes, according to his own diet-scale, as much animal food as the avowed flesh eater. ... it is not true Vegetarianism, being nothing else than the substitution of one form of Animal food for another."

The Vegetarian Society debated changing its name for the rest of the 19th century - at times considering names such as 'VEM Society' - vegetables, eggs and milk - and 'Food Reform Society', but none of these were adopted.

In the late 19th century there was still much confusion. Anna Kingsford MD, writing in the Preface to her 'Dreams and Dreams Stories' of 1886, stated: "For the past fifteen years I have been an abstainer from flesh-meats. Not a vegetarian, because during the whole of that period I have used such animal produce as butter, cheese, eggs, and milk."

Maybe we are beginning to see a return to the original, and obvious meaning of 'vegetarian' - as one who lives on vegetation. When I flew with Emirates Airlines last year there were a lot of food options, of which the three most relevant were:

1 - ovo-lacto-vegetarian 2 - lacto vegetarian 3 - vegetarian - so if the last one is not 'ovo' or 'lacto' then what is it? It duly arrived with a sticker saying 'vegan'.

For the much longer and more detailed version of everything above, with links to all original sources, see: www.ivu.org/history/vegetarian.html

Update (Feb 2011): in the above blog I failed to mention that the Alcott House community also adopted all the same ethical values as modern day vegans. They clearly wrote that they objected to the use of animals for any purpose, not just food - one reason the Fruitlands community failed was because they refused to use horses for the hard farm work. They were totally ethical vegetarians.

Google Books appears to show some uses of the word 'vegetarian' before 1842 - however checking the original texts, instead of just looking at the scans, shows that *all* of these are scanning errors.

I was invited to expand this into a double page article for the winter 2010/11 issue of The Vegan magazine, published by The Vegan Society based in the UK. This is a PDF of the resulting article (623k): www.ivu.org/history/Vegan_History.pdf

I've also been giving an even more detailed version of this as a powerpoint lecture - available to anyone who wants to pay my expenses... :-)