Whether you subscribe to Eve and Adam or Evolution, it is clear that our distant ancestors lived entirely on fast-food. It was growing all around them in the jungle/garden – they just reached out, grabbed some fruit, nuts, berries, leaves, shoots, herbs (and a few bugs) – and ate it. Even with some occasional peeling or cracking, it was about as fast as it gets. 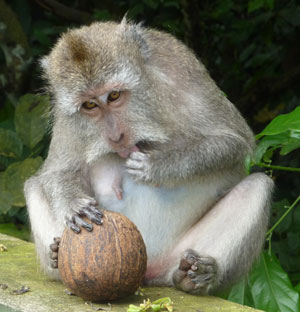 So we went through some thousands of years of culinary complications, some of it designed to make the flesh look a little less erm… fleshy, but most people still ate mostly plant-foods. Until very recently it was only the rich that could afford to eat much meat, and the symbol of wealth and power became far more important than any nutritional value. Meat eating became the equivalent of big houses and flash cars, hence the city-dwelling Chinese wanting more of it these days, and for the same reasons.

The culinary complications were fine for those with chefs to do the cooking, but it was always really too time consuming for most other people, only a minority really enjoy complicated cookery (beyond watching TV chefs). And modern fast food is taking the rest back to the jungle, though in a very unhealthy form.

The modern equivalent of the jungle trees are the supermarket shelves, just reach out and grab whatever fatty, sugary food you feel like eating. The difference now of course is that the humans take it back to the nest, then put it in the microwave.

And if even that’s too much hassle, then the fast-food ‘restaurants’ make it easier still. You can get a beef-burger in a bun in a couple of minutes, and it is similar in size and shape to a large piece of fruit, just minus much of the nutritional value.

So no knives or forks needed, and no table manners, our primeval fruit grabbing hands are fine. A hot dog is just a junk version of a banana, and a slice of meat pizza is nothing more than a large leaf with some tasty bugs on it.

All those sugary snack bars fit the banana shape too, simply peel back and eat. This also reflects something of a return to the continuous grazing pattern of the jungle, but with dangerous health consequences in some of these modern substitutes.

Some people really are trying to return to the original healthy fast-food – just grab some fruit, nuts and leafy greens and eat them raw, though most of us still prefer a few beans and whole grains in the mix too, and those do need some basic cooking. 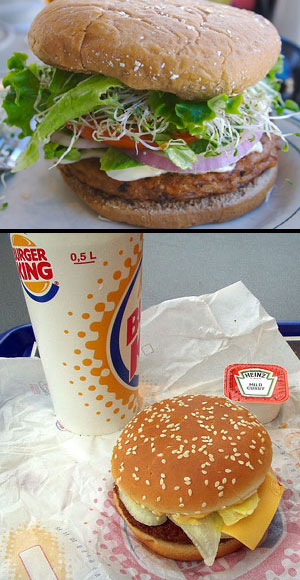 In many countries all branches of Burger King and McDonalds do bean-burgers, and they would be adequate (minus cheese, plus wholewheat bun…) – if they didn’t come from BK and McDeath. Though personally I’m pleased they do them anyway, not so much for the existing vegetarians, more to encourage their meat-eating customers to at least try something different – and someone must be buying them…

Right: top - how a healthy bean burger can look, and below a rather sad BK ‘bean burger meal’...

So will humans eventually evolve beyond this processed imitation phase, and return to the original fast food of the jungle?

Back in the 1980s I remember Margaret Thatcher being asked if she would encourage people to eat more fresh fruit and vegetables. She was totally against it, her priority was to reduce unemployment (hence improve her election prospects) so she was promoting ‘value-added’ (i.e. processed) food, because that created jobs in the processing factories.

And of course when the customers get ill from eating all that junk, it creates even more jobs in the medical and pharmaceutical industries. A win-win for the big businesses and their political puppets (When Thatcher left office she joined the board of British-American Tobacco . . .).

But yes, we should all get back to more of the original fast food. That’s some of ours below, all from our own garden, but there is still plenty of it everywhere else.

For more about vegan history, see my free e-book: ‘World Veganism – past, present and future', including the above article, and more. You can download it for free at: www.ivu.org/history/Vegan_History.pdf (8mb)

see also:
Index to all the blogs
The Diet of Early Humans - a collection of articles