10 days that changed everything (for me) – Singapore, Indonesia and China

I had been to Asia before, to Thailand and a couple of trips to India, so I didn’t expect this one to East Asia to be dramatically different, but it was.

In November 2009, the Indonesian Vegetarian Society (IVS) hosted the 4th Asian Veg Congress, on Batam Island near Singapore. I had tried to persuade them to combine it with the World Veg Congress which they were also hosting the following year. It seemed too much to do two, when they had never done one before – but I was wrong of course.

I wanted to go to Batam, but it was too far from England for just a weekend event. Then our Chinese webmaster in Beijing told us about a Veg Food Fair being planned in Xiamen, on the south-east coast of China. This would be the first major veg event on mainland China and George Jacobs (IVU Chair in Singapore) and Susianto Tseng (IVS President and IVU Regional Coordinator) were interested in going.

The Xiamen event was just two days after Batam, which would be perfect for me to go to both and justify the long haul flight. The usual problem was how to pay for it all, when IVU doesn’t have the funds to help any of us for these things.

The Indonesian VegSoc generously offered to cover my costs on Batam, George would look after me in Singapore – and to our surprise the Chinese organisers offered to cover all expenses for three of us to go from Singapore to Xiamen and back. So I just had to pay for the return 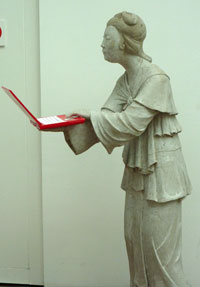 flight to Singapore myself, and the trip was on.

What made this so different was the unexpected scale and quality of what the veg*ns in Indonesia and China were able to do, way beyond anything I had seen in the west.

Thursday Nov 5 – to Singapore via Dubai. I was met by George at airport, then to Raffles Hotel for a drink at the historic hub of the eastern British Empire.

Friday Nov 6 – met up with Shankar Narayan, IVU Coordinator for India & SW Asia. George took us on a whistle-stop tour several of veg restaurants (they have a lot of them in Singapore), and the city museum.

Right: a sculpture in the museum contrasting old and new…

We took the ferry to Batam Island, checked into the hotel, then a bus ride to the venue for the opening ceremony. Just seeing what was happening at that opening made it obvious that the Indonesians were perfectly capable of handling two huge events in successive years. 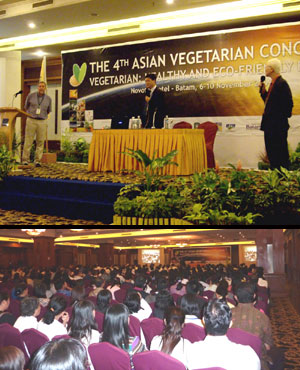 Sat/Sun 7/8 – the 4th Asian Veg Congress got under way in the hotel, and I was given the honour of the opening talk, with an estimated audience of about 1,000. For the rest of the weekend we had single sessions in the big hall in the morning, then parallel sessions with four speakers in smaller rooms in the afternoons. The food, all vegan of course, was outstanding, and there seemed to be no problem feeding so many people at the same time.

Right: the question session after my talk (with a translator) and the view from near the back.

In between listening to some of the other talks I was drafted into a round media interviews and endless photo calls. The involvement of local media was impressive, the word about this event went well beyond those lucky enough to be there in person.

Monday 9 – we were taken a bus tour of Batam Island, where I was the only European on the bus, apart from Katharina who has lived in Thailand for years anyway. I felt totally at home with a bus full of people from all parts of Asia, there is something about their temperament that suits my laid back approach to life perfectly.

Tuesday 10 – back to Singapore on the ferry, and a bus tour of the city. In the evening George had put the word out via the local veg meetup group and we had a great gathering at yet another veg restaurant.

Wednesday 11 – a four hour flight to Xiamen, my first visit to China. George decided not go himself and asked Song Mau Lee to represent the Singapore VegSoc, which he did extremely well. Our Chinese webmaster, Genggeng, was setting up an IVU stall at the huge veg food fair, but needed some leaflets in Chinese. The Singapore group donated a big batch which we stuffed into our bags, hoping the security people didn’t see them as suspicious (we were on tourist visas). The guy on the scanner commented on me having ‘a lot of books’ in my bag, but didn’t bother to check.

We were met at Xiamen airport by two young ladies from a professional PR agency, complete with a driver and a people carrier, and were taken to an amazing 5-star hotel. As soon as we’d settled in, it was down to the auditorium for a full rehearsal of the talks planned for the following day. We had five speakers from five different countries, and we ran thru everything to check the timing, sound and visual equipment, even the lighting.

Thursday 12 – I was on the platform with a group of businessmen for the opening ceremony of the event. It was a combined Buddhist Craft Fair and Vegetarian Food Fair – with attendances expected in ‘tens of thousands’. We had a tour of the vast exhibition hall, and found the IVU stall which had been superbly created.  Below: the IVU stall in full swing. 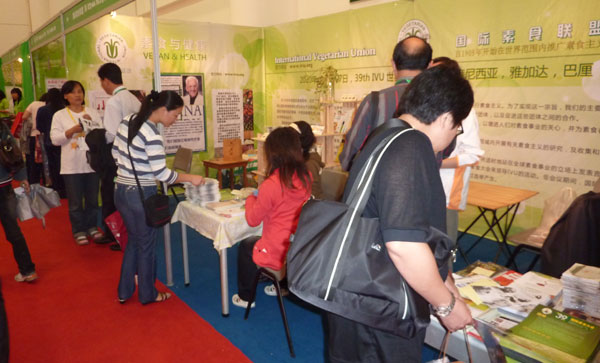 Lunch was with the translators, everyone in the audience would have headphones so they wanted a briefing of what we would be saying. In the afternoon I gave the opening talk at the forum, as far as I know this was the first talk ever given at a large international veg event in mainland China.
Below: my talk at the forum: 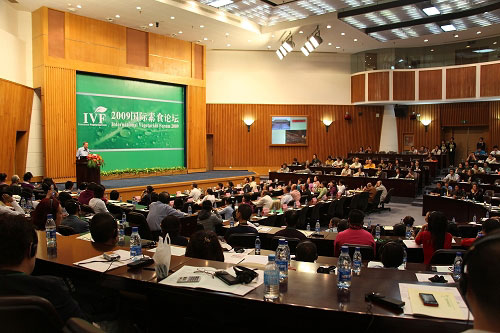 Friday 13– we were taken on a tour of the nearby university, and into the temple next door for an amazing lunch (see www.vegsource.com/john-davis/food-as-art-in-china.html ). Sat 14– more local sightseeing. Sun 15 – back to Singapore and home via Dubai.

Those ten days left me with a lot to think about, and changed my views of the way we do things in the west.