Andalucia - the home of Flamenco

Andalucia is the southernmost region of Spain – where the recent International Vegan Festival was held. As a guitarist who has tried to play flamenco from time to time, though rather badly, this part of the world has particular interest for me.

Sadly Andalucia is also the home of bullfighting and some flamenco dancers imitate matadors, though there is no need for any connection between the wonderful music and dancing and the so-called ‘sport’.

Andulacia is also the home of the Spanish Vegan Society, which has been campaigning vigorously against bullfighting for many years, and there are real signs of public opinion changing, especially among younger people (it was banned in Catalonia, in the north-east, last year). So holding the International Vegan Festival in Andalucia was a positive gesture of support for them.

As well as the organized tours, Hazel and I rented a car for the week and took a few trips with some friends from the Festival – these are some of the place we went:

Below – a group from the Festival, in Malaga, on the old fort, overlooking the city (the bullring can just be seen behind the figure in blue on the left): 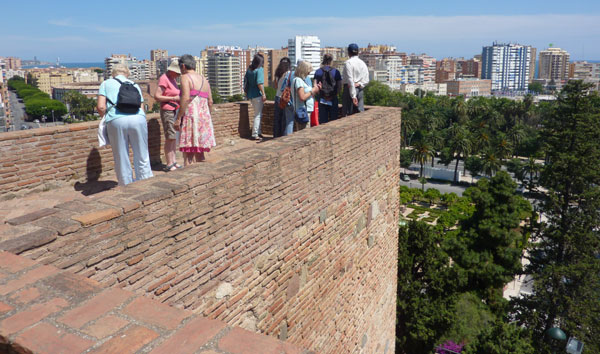 Below -  inside Malaga Cathedral: 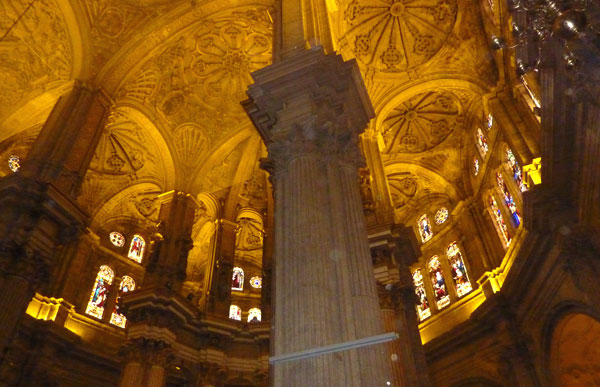 Below –  left a flamenco busker outside the old fort, he was very good; right flamenco dancers in the park; middle re-tuning for the dancers: 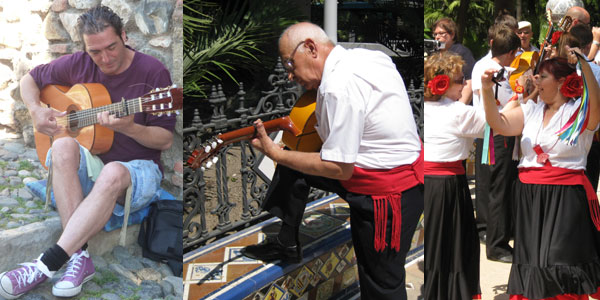 Below – along the coast, east of Malaga: 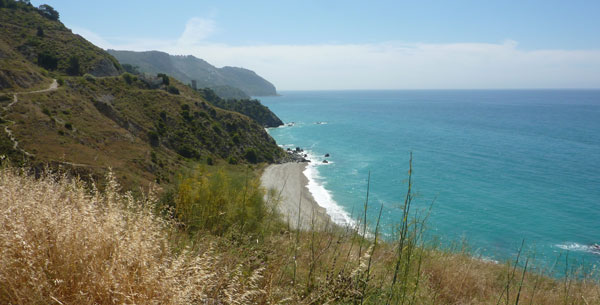 Below – the sea in stunning shades of blue: 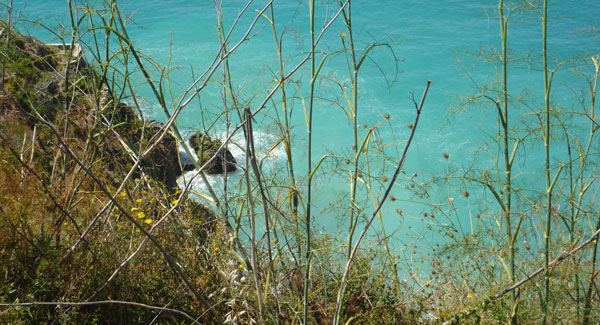 Below – Brian (right) and Julie (left) from the London Vegans (Hazel in the middle): 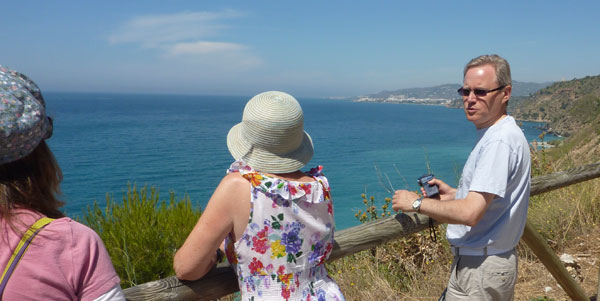 Below – cacti in flower near the beach: 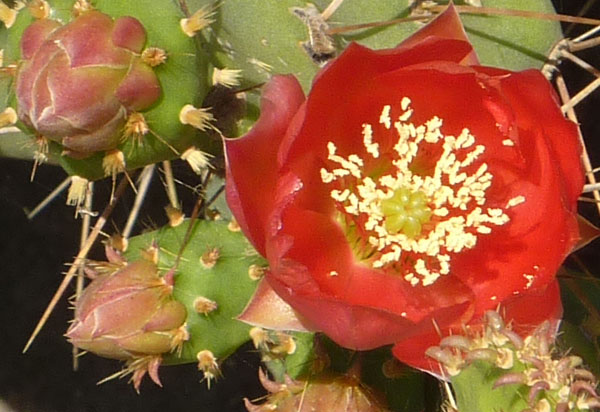 Below: one of a line of old towers all along the coast: 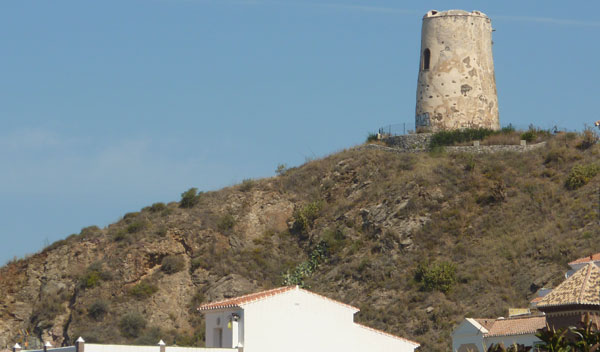 Below – we took a drive over the mountains towards Granada, with our friend Susianto from Indonesia - IVU Coordinator for Asia-Pacific, this was overlooking a lake. Those are houses on the left giving a sense of scale - weather very cloudy so no such bright photos: 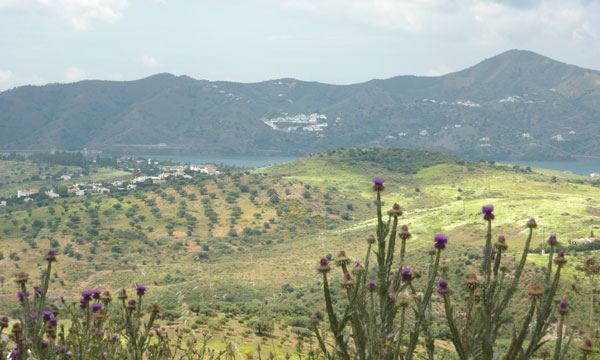 Below – it was starting to rain as we climbed higher, more houses in the distance on the other side of the valley:

Below – the road went through that gap in the mountains, just visible left of the gap. The concrete blocks on the right hide a very steep drop (photo by Susianto from the passenger seat of the car): 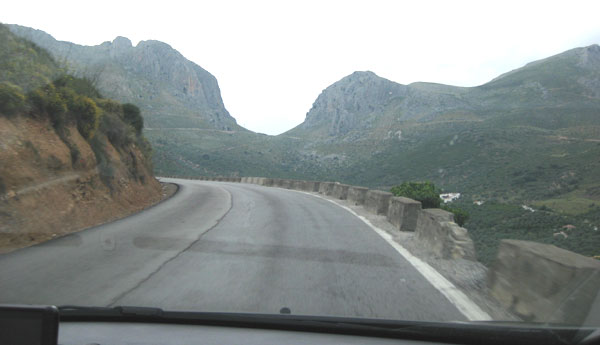 Below: at the gap on top of the mountains, Hazel and Susianto looking back. We continued down the other side through some torrential rain: 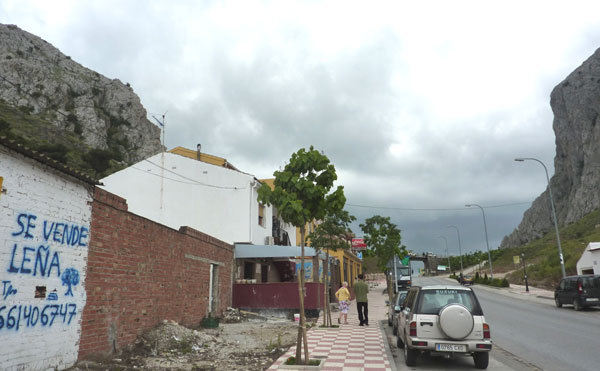 Below – south, near Gibraltar, where we visited Hazel’s cousins in their cliff-top villa – more houses on the left, a long way down on the beach. The Atlas Mountains of Morocco are visible from their front gate, just off to the right of the photo: 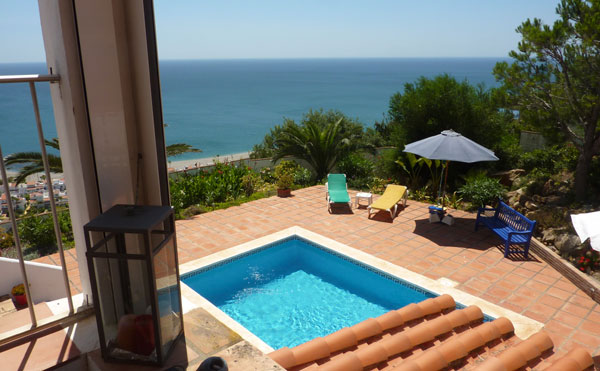 Below: on the last day, some of us from the Festival re-grouped at the (all vegan) Loving Hut in Malaga, before setting off home: