The Jakarta IVU Congress last week was a huge success, one of the best ever, then some of us went on to the beautiful island of Bali.

Thursday Oct 7 - flew from Jakarta to Bali on Air Asia, then to the seminar, where Susianto - IVU Regional Co-ordinator for Asia-Pacific and myself were speakers - and a cultural event which included some traditional Balinese dancing: 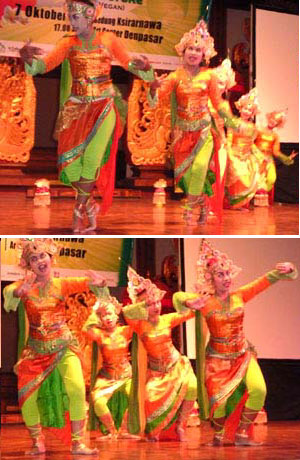 Friday October 8 - first bus tour around Bali, starting with a temple in a dramatic setting on an offshore rock.

- and the view from the mainland part of the temple:

Then to the 'Monkey Forest', another temple where the monkeys are semi-wild, and giant fruit bats roost in the trees during the day:

Below: Marly Winkler from Brazil (IVU Regional Co-ordinator for Latin America)with a new friend; a family group; and an old man with a coconut, which some of the group seemed to think reminded them of someone...

Lunch with a view:

Temple 3 - in another dramatic setting in a lake surrounded by mountains:

Temple 4, surrounded by a moat:

Saturday October 9 - to Turtle Island where eggs are hatched safely away from predators. The turtles are returned to the sea as soon as they are big enough:

The backdrop to lunch:

A visit to a wood carving workshop; a fruit offering being carried to a temple; and a temple procession through a wet bus window:

A little Bali wildlife, the giant spider, about the size of a human hand, with three babies in the web, and some butterflies that would not stay still: 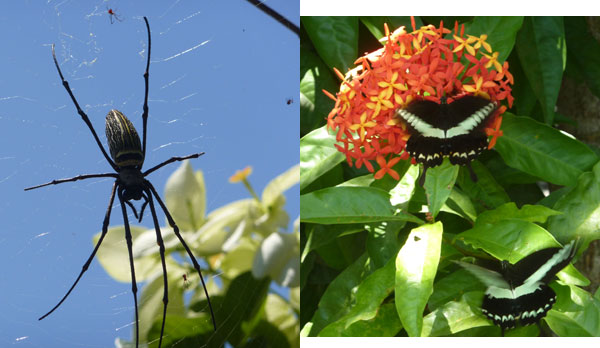 Some of the group at breakfast - by the last day at the Ramada hotel we finally got our own vegan buffet. This little group includes friends from Australia, UK, Ireland, Brazil, Hong Kong and Malaysia. The two day tour also included more from India, Germany and Indonesia. Most headed for home during the day:

Off to a Maitreya Buddhist Temple where I gave a talk:

In the evening to the 'Fire Dance' at an open air clifftop theatre, with the sun setting as the dance was underway: 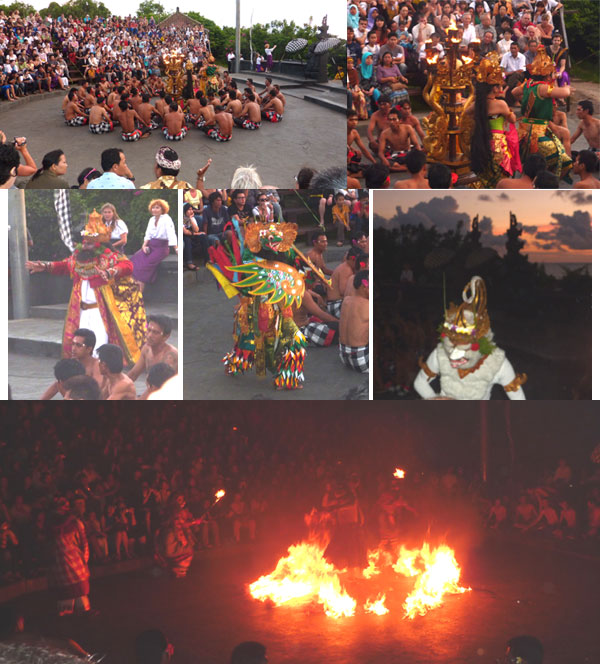 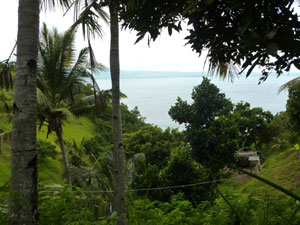 Monday October 11, to a high school to give a talk to about 100 children, all non-veg. They asked some intelligent questions and it was very enjoyable. After lunch at yet another vegan cafe, Diana, the young president of the Bali branch of IVS, and our even younger translator, suggest visiting a hilltop site in the east of Bali which was unknown to the tourists. The trek up the 'jungle' path was great, and the view from the top was amazing, across mountains and the sea to other islands, including Lombok. Unfortunately we hit heavy rain on the way down and were totally drenched, but it was still a good to round off my last few hours on Bali. The photos are some views from the walk, note the house below right: