To Nairobi and Dubai

Monday Nov. 29 - left England in the ice and snow, the first November snow for 17 years

Tuesday Nov. 30 - arrived Dubai about 1.00am, met by Sandhya Prakash, IVU Middle East Co-ordinator, and taken to her home to get some sleep. In the morning met her family over breakfast, then to downtown Dubai for a press conference to promote the first ever Middle East Veg Congress the following week. Below is the view across the road from the entrance to the hotel: 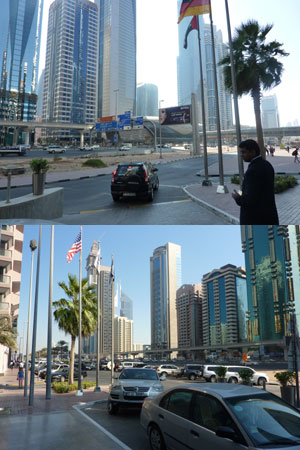 - and the press conference, as part of the organic expo, with me (in rather casual dress as my suitcase was waiting for me at the airport) next to a senior official from the UAE Ministry of Health, and Sandhya 2nd right: 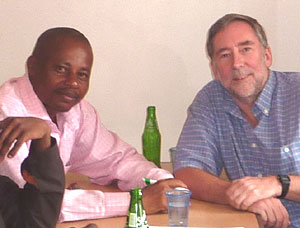 After lunch at the hotel, Sandhya took me back to the airport for the 3.00pm flight to Nairobi, Kenya. Met there by Satwinder Singh Sian, chair of the Vegetarian Society of Kenya; Liladhar Bharadiar, VSK secretary - and most importantly Emmanuel Eyoh from Nigeria, the IVU Regional Coordinator for Africa, who I had worked with online for many years but never been able to meet in person - that's him on the left the next day (we were having lunch at the Hare Krishna Temple).

Wednesday Dec. 1 to Saturday Dec. 4 - in Nairobi. During these four days I met all the leaders of the VegSoc of Kenya, helped to feed people in the slums; joined another feeding session for disabled and disadvantaged people; joined a press conference to promote the first ever East and Central African Congress to be held on December 17/18; met with many members of the local veg community in temples and cafes, gave a talk about world veg*ism - and even managed four hours for some of us to see the wildlife in the Nairobi Naitional Park (a sort of mini-safari).

Below, some scenes from the first feeding day in one of the slum areas, with me having a go at serving rice into any containers they brought along, and Emmanuel with some boys after the beans were  added from another vat: 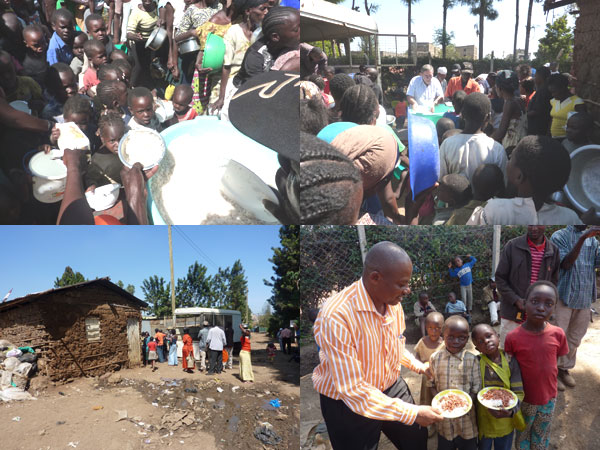 - and four of us at the press conference on the Saturday, not quite as glamorous as the one in Dubai but we got good press coverage from it. l-r: Emmanuel, Satwinder Sing Sian, VSK chairman, me, and Liladhar Bharadiar, VSK secretary: 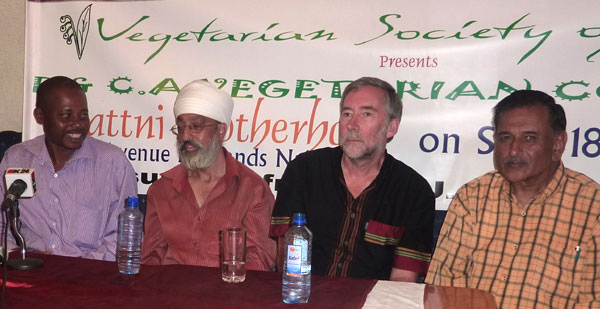 After the press conference I gave a talk about IVU and World Veg*ism for the local group, then on Sunday Dec. 5 it was back to Dubai.

The Congress itself was a great success, with many new ideas that the rest of us can learn from. Over the two days there 16 speakers from many countries around the world, workshops for children, fabulous vegan food provided by sponsors, the organic food expo taking place alongside, and all of it video'd by SMTV who brought in 14 people from East Asia to do the job. The grand finale was a live interactive satellite link with Supreme Master Ching Hai from the climate change conference in Cancun, Mexico:

Wednesday Dec. 8 - back to the ice and snow in England. It was minus 2 degrees C when I landed.

This is just a brief overview of the activities in both countries, I'll be coming back to more about them over the next few weeks. Meanwhile some items from the media about each of these amazing events:
Nairobi: vegsource.com/.../nairobi-to-host-first-ever-veg-congress-in-east-africa.html
Dubai: vegsource.com/.../first-ever-middle-east-veg-congress-held-in-dubai.html