Percy Bysshe Shelley, known as Bysshe to his friends, was the rock star of his day - glamorous, controversial, fought over by teenage girls, loathed by their parents, and died dramatically before he was thirty.

At times he was also vegan, lived in a hippy-style commune, wrote about 'free love', had friends who were nudists, probably joining in that too, and was thrown out of Oxford University soon after he arrived.

All of that was 200 years ago, and during the last ten years of his short life he wrote what was arguably some of the finest poetry in the English language.

In 1811, when he was 19, Shelley married 16 year old Harriet Westbrook. They moved around for a while and were in Dublin in March 1812 when Harriet wrote to some friends that they had adopted the 'Pythagorean system'. Shelley was a classics scholar and had probably read the original texts in ancient Greek and Latin suggesting that Pythagoras had been lacto-vegetarian. Later that year they returned to London where Shelley met John Frank Newton, author of 'Return to Nature' and a patient of Dr. William Lambe, Fellow of the Royal College of Physicians, and author of the 'Water and Vegetable Diet' - both of them advocating what we now call veganism, in ethics as well as in diet. Shelley soon joined them, as testified by his friend William Hogg in his later biography.

This was decades before any dairy or egg substitutes were commonly available, so it must have been hard for them to adapt, but the accounts show they were serious in their attempts. Shelley's first major poem 'Queen Mab' published 1813, included as a preface his essay on 'A Vindication of Natural Diet', and in the poem the lines:

No longer now He slays the lamb
that looks him in the face,
And horribly devours his mangled flesh;

In 1814 Shelley left Harriet, now 19 and expecting their second child, and eloped with 16 year old Mary Godwin who later became the 2nd Mrs Shelley after Harriet committed suicide.  Not surprisingly all this didn't go down too well in respectable society of the day and they had to spend most of their time living overseas.

During the summer of 1816 Shelley and Mary met up with fellow poet Lord Byron and a doctor friend on the shores of Lake Geneva, Switzerland. They shared a cottage for a while but the weather turned bad, and as there wasn't much on TV in 1816 they decided that each of the four should think of a story to tell the following night. With two of the four being Shelley and Byron, something special might have been expected - but it didn't come from them. It was Mary, a few 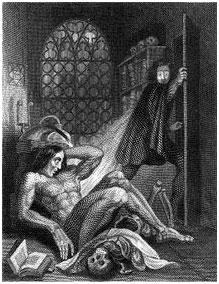 days before her 19th birthday, who told a story a man who created life - and she called him Dr. Frankenstein.

In 1818 the full story was published as a novel, and the rest is history, with it being generally credited today as the first of a new genre - science fiction. But what is not so well known is that the nameless 'monster' (a gentle giant until provoked) that Dr. Frankenstein created was also vegan. At one point in the story he says: "My food is not that of man; I do not destroy the lamb and the kid to glut my appetite; acorns and berries afford me sufficient nourishment." The illustration of the monster on the right is from the 1831 edition of the book, rather different to the Hollywood version 100 years later.

Shelley and Mary ended up living in Italy, where he drowned at sea in 1822 - below left is a later imagined painting of his funeral pyre lit by Byron on the beach, and right a portrait of Mary in later life. 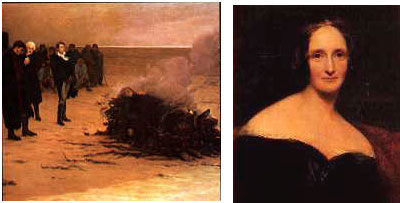 During the rest of the 19th century Shelley's reputation was somewhat whitewashed by the Victorians who liked some of his poetry but not his lifestyle. In 1886 George Bernard Shaw became secretary of the Shelley Society in London, and used his first meeting to announce: "I am, like Shelley, an atheist, a socialist, and a vegetarian." Shaw's close friend, Henry Salt, then wrote a series of articles on Shelley over the next few years, putting the record straight.

For more background see 'Prototype Vegans' from the Winter 2010/11 issue of The Vegan: www.vegansociety.com/.../prototype_vegans.pdf (PDF 623k)

For full details of the Shelleys, with links to all original sources, see www.ivu.org/history/shelley