Living on the Front Line

Last Friday Hazel and I were in a group of 15 sitting down to a vegan meal together. Nothing unusual in that you might think, but in this little corner of the world it was probably unique. This is livestock farming country, with hunting, shooting, fishing and any other form of animal abuse you can think of somewhere nearby. 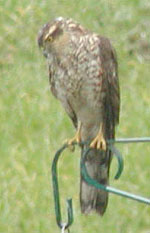 The sparrow-hawk on the right was sitting on our garden bird feeder. We hadn't intended the smaller birds to be the food, but I have watched a hawk tear one apart in the tree. So some people just think of it as normal for them to behave the same way, but of course humans have a choice, sparrow-hawks don't.

We do have crops growing around here, but the farmers don't waste their time growing food for humans when they can make far more money from animal feed, and one of the biggest animal feed firms in the country is just down the road. We have small scale factory farming in our village, and more around the area for beef and poultry. The farmers' market in the nearby town is almost all meat and dairy, very few commercial growers bother with fruit or vegetables, despite the good quality land. And the slaughterhouse is about five miles to the east. Below, from my office window, a mile north, animal sheds and feed silo:

The first problem of arranging a vegan meal for 15 people is simply finding somewhere to hold it. Most of the pubs and restaurants offer ovo-lacto-vegetarian options - just replace the meat with large quantities of eggs or cheese and the local dairy and egg farmers don't mind too much. But take out even that and you meet with suspicion and even open hostility. Below, pheasants bred by gamekeepers for shooting, photo from my office window:

So the local 'Voice for Animals' group only attempt it once a year, for their Christmas Dinner - a little late this year in January. They are based some distance away, and have members from a very wide rural area. They've held these dinners various places over the last few years, some good, some awful. This year they were at a pub called the Golden Lion just over the border in Wales, which laid on a three course completely vegan menu, with three choices for each course. But this is not a very conventional pub, the landlord gives guitar lessons at the back, has his friends round to provide live music gigs, and the whole pub doubles as a musical instrument shop. So we had our vegan meal surrounded by guitars for sale:

So it can be done, even here. But why would people like us want to live in a place like this?

Because it is beautiful countryside and it needs to be reclaimed as the natural environment that it once was. It wasn't always like it is now - not so long ago most ordinary people around here didn't eat much meat simply because they couldn't get it. They grew their own vegetables, and gathered from the wild, including some animals and fish, though mostly through poaching which brought harsh penalties if they were caught. They would not have understood anyone actually choosing to eat only plant food, but not because of nutritional concerns - to them flesh-eating was a symbol of wealth and power and their descendants today do not want to be seen eating 'peasant food'. Below: from my office window, a mile east, sheep grazing and the feed silo for dairy cows.

These days we all want to live in the beautiful countryside, and recent plans to expand the factory farms and the slaughterhouse have all met with fierce opposition from local meat-eating residents. They'll still buy their cheap meat in the supermarkets of course, but they just don't want to be reminded of where it comes from, preferring the advertisers fantasy-land of cows grazing happily in the green grassy fields.

We do have cattle in the field at the back of our house from time to time - but it doesn't take much to see that there are no cows (i.e. females). These are all-male herds, fattened up for a couple of years between the arable crops which end up as animal feed. We get the lucky ones in our field - the majority spend their entire short lives in the big sheds before being hauled the five miles for slaughter. Below: even being outside doesn't guarantee much grass (from my office window.)

In this area our little gathering of 15 sharing a vegan meal won't go unnoticed, and the 'Voice for Animals' group will be taking their stall anywhere they're allowed to set it up. So if you're finding life a little too easy in a veg-friendly town or city, come and join us on the front line.