International Vegetarian Union and the Venerable History of Vegetarianism [Videos]

If a picture is worth a thousand words, then how much is a video worth?

Last year a friend sent me a link which she said had some info I was looking for. It turned out to be a young woman talking to a camera for about 45 minutes, the bit I wanted was somewhere in the middle . . . I suggested it would have been easier if she wrote it down, I could read the whole thing much quicker than watching the video, but more usefully I could skim thru to find the detail I wanted.

My friend said that young people these days don’t like reading, they would rather watch a video . Apart from making me feel rather old, I found that an alarming comment – are the next generation really losing the ability to read more than a few words?

Well . . . if you’ve had enough of reading my blogs, you can now watch some instead. The programs below are mostly edited from an interview I did at the 1st Middle East Veg Congress in Dubai last December – partly about veg history, and going on to what IVU is doing these days. 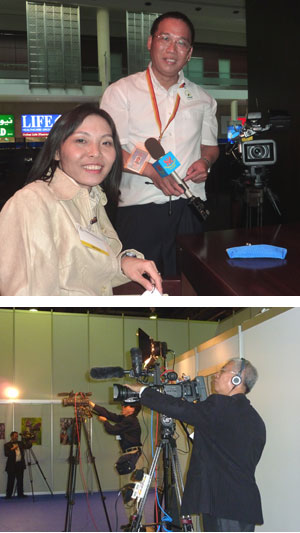 Top - how Jun, the interviewer, and Sam, the cameraman, looked from where I was sitting – we used a Dubai conference center café which was fortunately not busy at that time.

Bottom – the whole congress was broadcast live, then an edited version was re-broadcast in five episodes a couple of months later.

The program title is:

Each of the links below has links to the other two, and other video formats if preferred for your system:

Part 1: - the early days of veg*ism on the internet; the earliest vegetarians, thru to the beginnings of veg organizations in the 19th century, and the launch of IVU in 1908: www.suprememastertv.com/nl/...url=link2_0

Part 2: - the origins of the words ‘vegetarian’ and ‘vegan’; the expansion of media and veg restaurants, and the impact of environmental awareness: www.suprememastertv.com/nl/...url=link2_1

Part 3: - what IVU has been doing around the world in recent years, and the Middle East Veg Congress in Dubai. www.suprememastertv.com/nl/...url=link2_2

Each episode is about 16 minutes. All three, in various formats, can be found at: www.suprememastertv.com/nl

Below - the Minister of Health for the United Arab Emirates lighting the lamp to open the congress, with IVU Middle East Coordinator, Sandhya Prakash (in blue):