A couple of weeks ago Hazel and I went to the annual BBQ organised by the Wolverhampton Vegans and Veggies – a really nice laid-back afternoon, in some hot sunshine for a change. 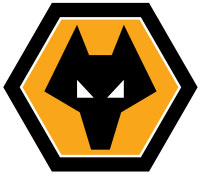 The city’s football team is called The Wolves, though I don’t think they’ve been attracted to the barbie yet…

It was well publicised across the city, plenty of sign-boards to the ‘free veggie BBQ’ – in fact it was all-vegan with a list of small ’suggested donations’, and plenty of tables with leaflets etc. From the look of the buckets people were donating far more than the suggestions.

We’ve seen a lot of changes in local groups across the UK in recent years, a typical example is a group that ran from 1967 as the ‘Oxford Vegetarian Society’ and continued as that until recently – but is now known as Oxford Vegetarians and Vegans – or just OxVeg for short.

Below: a few scenes from the ‘Vegan Wolves’ free public BBQ: 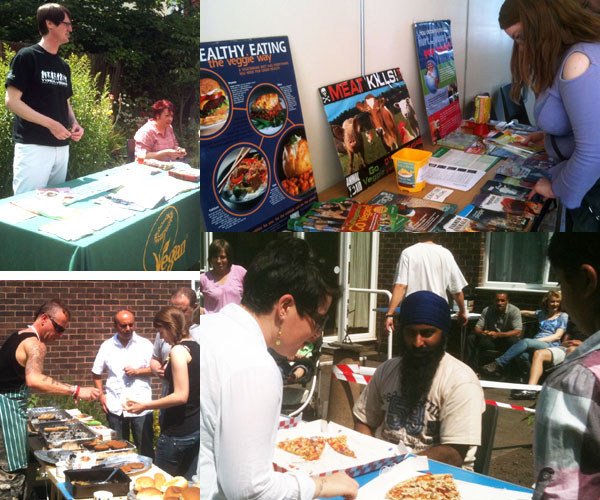 The end of the formal societies has come very rapidly. In the 1990s the Vegetarian Society UK had about 100 affiliated groups, almost all called ‘society’ – a quick survey of the current 106 shows that 100 of them are now just informal vegetarians / vegans / veggies / veg or some combination of those. Only 6 actual local societies remain.

The UK Vegan Society also lists around 100 local groups, many of them the same as above as they affiliate to both – and only 2 ‘societies’ among them.

The change is due to the internet of course – local groups mostly needed formal structures to look after the money they had to collect to print and post newsletters. Now everything is done on websites and email, so no costs involved, and no formal society needed.

Meanwhile the national societies are looking less and less like the ‘social network’ clubs that they were before the age of the internet. Memberships are declining, and attracting trustees is getting harder.

On the new version of social networking, facebook, the most popular vegetarian page now has over to 150,000 fans – traditional societies could only ever have dreamt of numbers like that. And most societies around the world now have far more Facebook followers than real-life members.

So where does this leave the future for local activities? My impression is that they are getting much stronger, and we are now seeing major events organized locally, and independent of any of the national organisations. The big VegFests such as Bristol and Brighton are typical of that – and there is one of those in Wolverhampton too, on October 29 this year, organised by the Midlands Vegan Campaign. They had over 1,500 visitors last year, which is impressive for a relatively small city.

Below: the scene in the main hall at a recent Wolverhampton Vegan Festival, this year’s prediction is “80+ stalls, 20+ talks/workshops, vegan caterers from across the UK, live music all day, late night party & much more!” 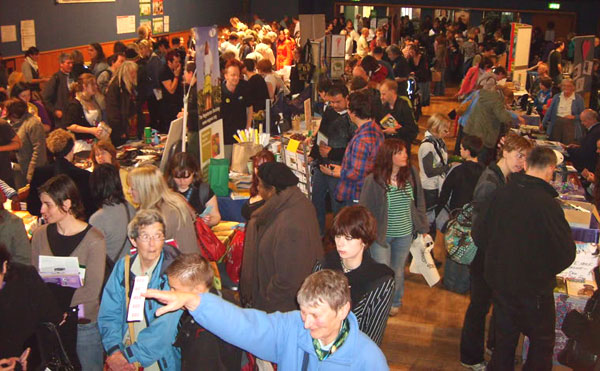 This appears to be following from what has happened increasingly in North America over the last 10 years – there are now variations of VegFests attracting thousands of visitors in San Francisco, Toronto and Boston. We know of at least 20 more in that region, and growing numbers in other parts of the world.

The older of these City-based VegFests, like the three named above, are run by traditional local societies, but others are increasingly being run as separate organisations in their own right. There are many variations with an endless mixture of trade & info stalls, guest speakers and entertainment, but always in the same place and about the same time every year. It looks like there will be one near you soon - if not, maybe you should try filling the gap . . .

Meanwhile, if you’re near Wolverhampton on October 29, I’ll be giving a talk there on ‘The History of Veganism from 1806’, see: www.veganmidlands.org.uk/festival