The China Congress - with pictures

Below are some of my photos from the three days of my second visit to China, the first two at the first ever veg congress in that amazing country, in Hangzhou, then a brief visit to Beijing. There are a lot more (and bigger) photos on the IVU Facebook page, see the links at the bottom.

The first photo was as we were about to start the opening ceremony, 9.00am Tuesday Nov. 8. To my right are two nutrition professors from Austria and Australia, the chair of IVU Council (Singapore) and the president of AVU (Thailand). Bottom photo:  one of the two lecture rooms in action, where I was given the honour of chairing the first session, with the two professors as the first speakers: 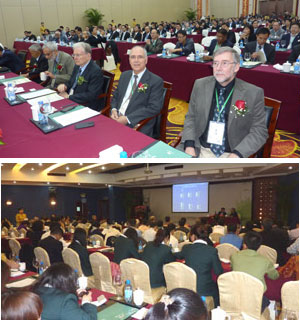 Below: a view of the hotel entrance during a tea-break outside the other lecture room, and the all-vegan self-service lunch in an elegant restaurant. For me this was some of the best-ever food at a veg Congress:

After a day of lectures in both rooms we returned to the main hall for the closing ceremony – but on the way in we walked through an extraordinary exhibition carved entirely from vegetables, there must have been a hundred of these works of art on display (don’t miss the frog, bottom right):

Below – the closing ceremony – 2nd right in the group is Prof. Duo Li, from Hangzhou, who masterminded the whole event, and was elected President of the Asian Vegetarian Union during the Congress. On the left is Dr. Susianto Tseng, from Indonesia, now AVU Vice-President (also IVU Coordinator for Asia-Pacific). Next to him is Marly Winckler, Brazil, IVU Coordinator for Latin America, and they are joined by some more great friends from Indonesia.

On the right – handing over the AVU flag to Malaysia for the 6th AVU Congress in Kuala Lumpur, 2013:

The hundreds of delegates then sat down to the vegan banquet, the other meals were all self-service, but this one was brought to us – a seemingly endless flow of exotic vegan dishes placed on the revolving tables. 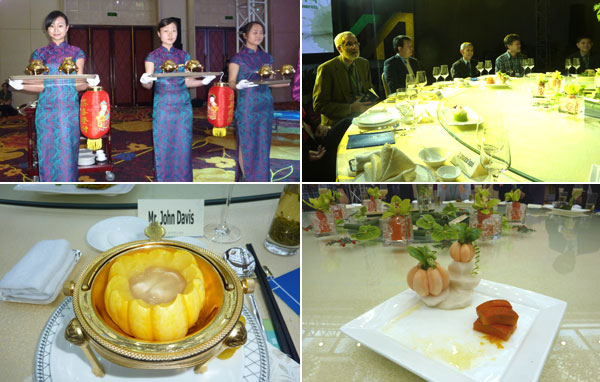 Above: the first dish of many. Inside the golden bowls the girls above brought to us, after opening the lid – a small squash filled with a clear mushroom soup; and right the remains of a plate on the revolving table after we’d eaten almost everything except the exquisite decoration.

After the banquet we were taken on busses to a vast auditorium somewhere in Hangzhou, for a spectacular stage show – dancing, singing, acrobats, and amazing technical effects, all on a stage the size of a football pitch with many thousands in the audience. Some scenes from it below, these were just the central part of the huge stage: 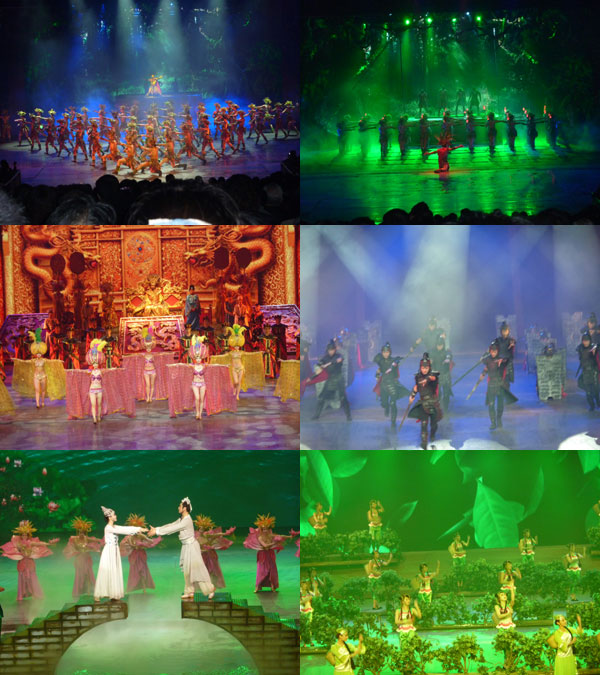 Up bright and early for a bus tour – first stop, the tofu factory in Hangzhou:

Then to the famous Pagoda, and up to the top for a view over West Lake – on a very dull and rainy day, but a great view anyway:

Then to a temple in the mountains, with stunning carvings inside and beautiful gardens outside – the vegetarian Buddhist monks just happened to be in one of their chanting sessions while we were there which added to the atmosphere:

Then on to another temple where we had dinner, they explained that all their meals are normally vegan, except for a few desserts which can have dairy products in them. Then an after-dinner tea ceremony with rather more traditional music than the extravaganza of the night before:

I flew from Hangzhou to Beijing in the morning, and did the political tourist bit in Tiananmen Square and the Forbidden City in the afternoon.

In the evening we had a great meeting with a dozen or so Beijing veg activists in a room over the excellent ‘Veggie Table’ vegan restaurant, run by Laura, an expat American in the middle below:

Later in the evening there was an environmental film show in the main part of the restaurant, and I was invited to use the equipment to give my talk of world veg*ism for all the customers. Laura very kindly offered me a room in her apartment for the night, and then it was off to the airport early in the morning, and home again. It was a long way to go for just three days in China, but worth every minute of it.