For the first time in its 103 year history, the International Vegetarian Union has a Latin American Chairperson - or chairman, chairwoman, or just chair, as you prefer: Marly Winckler from Brazil. In Portuguese these all translate as ‘Presidente’, though IVU doesn’t actually have a ‘President’ in the English version, not that it really makes much difference.

Marly is first known to have attended an IVU World Vegetarian Congress way back in 1994 in the Netherlands, we have some photos, but I won’t embarrass her with those.

Later in the 1990s Marly started an email group – veg-latina – which was the first time vegetarians and vegans in the Spanish and Portuguese speaking world had been brought together online (that still continues today as ivu-latina with hundreds of subscribers). It was around that time that I got know Marly online, and in 2000 the IVU Council accepted my suggestion to appoint her as IVU Regional Coordinator for Latin America. 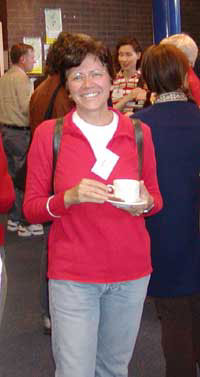 We finally met in person at 2002 IVU Congress in Edinburgh, Scotland. I took the photo on the right there.

The following year Marly and some friends were in the process of forming Sociedade Vegetariana Brasileira (SVB) – the Brazil Vegetarian Society. The 2004 IVU Congress had run into problems (as they often do…) and I asked Marly if they could do it in Brazil. It was a huge leap in the dark, there had never been a World Veg Congress in Latin America, and we had no idea whether they could do it, they didn’t know either, but they were willing to pull out all the stops and give it a go.

IVU gave SVB a grant to help get the Society up and running, so that they could then organise the Congress, and they promptly elected Marly as SVB President and put her in charge of it all. The end result, in November 2004, was arguably the best Congress any of us had ever been to. It was held on a beach resort with all the usual talks, lectures, workshops, etc., plus some great Brazilian style entertainment, and the added highlight of a huge cruelty-free fashion show, with hundreds more people coming in by bus to join us for that.

Marly got her own touch of fashion when a friend from Japan gave her a Kimono, and of course insisted she try it on:

That first Latin American Congress kick-started a whole range of activities across the region. Since then we’ve had Regional Congresses, several National Congresses in Brazil and Argentina, and a variety of other events in Paraguay, Bolivia, Chile, and more. We also got to know Manuel Marti, President of UVA - Unión Vegetariana Argentina, and he has also now joined the IVU International Council.

In 2009 Marly was the main organiser for the 12th International Vegan Festival, held in Rio de Janeiro, Brazil. The most noticeable aspect of these Latin American events was the large numbers of young people turning up - we had seen too many events elsewhere in the past that looked like they could literally all die out before too much longer, so this has been a real breath of fresh air.

Below is the big group photo from that 2009 vegan festival – considering the high travel costs for the rest of the world to get to Rio, this was an impressive attendance:

One of the recent achievements from SVB has been to persuade all the city run schools in Sao Paulo to adopt ‘Segunda Sem Carne’ (Meat Free Mondays) – so now all 3,000 schools are serving 2 million meatless meals every week.

A few weeks ago the Asian Vegetarian Union held their 5th Congress in Hangzhou, China (completely vegan as always these days) – that was the first ever veg congress in that country, and Marly was there too. It’s a long way from Brazil, she had to fly via Frankfurt in Germany, but made the most of her trip by visiting more veg friends and IVU supporters in Beijing and Tokyo.

George Jacobs, President of the Singapore Vegetarian Society, had been Chair of the IVU Council for the last three years. He was an excellent chairman who I appreciated working with very much, but he had always said he only wanted one term in office, and had already extended that. Shortly after we all returned from China, George proposed Marly as his successor. The IVU Council expressed its strong gratitude to George, then unanimously supported his proposal by electing Marly as the new chair.

Below is Marly at the Congress in China, with some of our great friends who are making such an impact in East Asia: 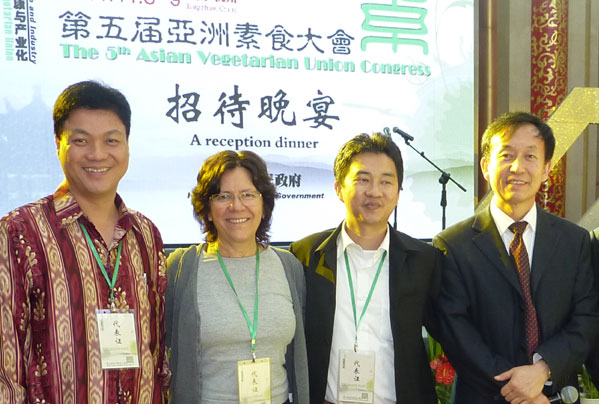