Lewis Gompertz (1783/4–1861) appears on the scene in 1824, at the age of 40, as the author of a significant book promoting an early prototype of what we now call animal rights and veganism; and in the same year he was a co-founder of the world’s first Society for the Prevention of Cruelty to Animals (SPCA, later RSPCA).

His 1824 book 'Moral Inquiries: on the situation of man and of brutes' was quite unlike anything before it, and there was very little of a similar nature after it until Henry Salt’s ‘Animal Rights’ of 1892.

His first principle was a fundamental objection to killing or harming any animal, or any living being, for any purpose whatsoever including food, clothing, labour, research or entertainment.

Oddly however, he considered human health to benefit from eating meat, and if an animal died of natural or accidental causes, he had no objection (at least in principle) to eating it, and using its skin for clothing. We see something of that in modern ‘roadkill’ debates. But Gompertz argued that any benefits could still never justify deliberate killing. He also acknowledged his own imperfections, particularly in clothing, due to social pressures and the lack of suitable alternatives. And we have to keep in mind that many modern vegan foods (e.g. soy and margarine) were completely unknown in London in 1824.

Gompertz also devoted a complete chapter to the use of eggs and dairy products. He stated that cows’ milk was for calves, and it was wrong to take a calf away from its mother. However, if a calf died naturally or accidentally then he saw no objection to humans using the surplus milk (in 1824 most people still lived on the land, not in cities).

He had a particular concern for horses, easily the most abused animal in London at that time as they were the primary means of transport, hauling all manner of wheeled vehicles. He very directly equated their use to human slavery, and argued for their freedom. He considered whether some land in England should be set aside for their natural use, or whether they could be transported back to ‘Arabia’ where he imagined they could live in the wild. But he was realistic enough to know that this ‘abolitionist’ approach was not going to happen, and devoted much of his life to improving the welfare conditions of the animals. 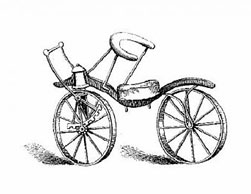 The rest of Gompertz’ time was spent as an inventor, producing a wide variety of devices, many of them aimed at improving animal welfare. One was an attempt to improve a very basic bicycle which was just beginning to appear – it had no pedals or brakes, just pushed along by feet on the ground. Gompertz added the gear mechanism on the front wheel in the picture. For him this was an attempt at an alternative to using horses.

All of this was many years before Darwin, but Gompertz argued that there was no significant difference between “humans and other animals”. He didn’t use the word ‘rights’ but he clearly wanted animals to be given a similar legal status to humans - apart from the oddity of skinning and eating them after they died... (would he still accept that today, with all the alternatives now available?)

His book also considered human issues, as summed up by the Oxford Dictionary of National Biography (1917): “Gompertz lauded the reforming influence of education, decried the evils of capitalism and of female subjugation, praised Owenite [socialist] co-operation, and speculated boldly upon a future state shared by man and other animals.”

The legal rights of animals became an issue in 1822, when the British Parliament passed a law against the abuse of ‘cattle’ (which included any large quadruped, particularly horses). But the police and magistrates largely ignored it, much as they do today with the anti-foxhunting law.

Two years later, 1824, the same year that Gompertz’ book appeared, a meeting was convened on June 16 at Old Slaughter’s Coffee House in London (named from the owner).  The 12 men present became the founding members of the world’s first Society for the Prevention of Cruelty to Animals (SPCA), with the initial object of recruiting their own inspectors to enforce the new law. One of the 12 was Lewis Gompertz but, as far as we know, he was the only one who objected to slaughtering and eating some of the animals they were trying to protect.

The others included two members of parliament, and two Church of England ministers. After two years of the new society struggling, Lewis Gompertz took over as the Secretary and developed it successfully for the next six years.

However, there were tensions with the Christian meat-eaters and Gompertz was accused of ‘Pythagoreanism’, effectively being a member of heretical religious sect, which he denied. The rest of the committee decided that the society must be run on ‘Christian principles’ (ie meat-eating) – apparently pretending not to notice that Gompertz was Jewish… he left and founded a new group, The Animals’ Friend Society, which for a few years outstripped the SPCA in recruitment and effectiveness.

In 1835 the SPCA attracted royal patronage from Princess Victoria, and when she became Queen two years later, they became the RSPCA. They have ever since continued to enjoy the patronage of one of the most animal abusing families in the UK.

Gompertz ran his alternative animal welfare society and journal until 1846. In the 1850s his books were re-published by William Horsell, first Secretary of the Vegetarian Society (1847-50) and subsequently leader of the (vegan) London Vegetarian Association.

He died, aged seventy-seven, from bronchitis on 2 December 1861 at his home in Kennington, London.