The Year of the Veg

2011 was the Year of the Rabbit in the Chinese calendar - but for IVU it was the year of the first ever veg congress in China. A brief look back at some international veg events of the year:

The 5th Asian Veg Congress was held in Hangzhou, China in November, with hundreds of delegates from at least a dozen countries.

Below: 1 – breakfast in China, IVU Council members from Singapore, UK, Indonesia, Brazil. 2-  one of the dozens of all-vegetable carved artworks on display at the end of the first day. 3 - musicians in a veg Buddhist temple at the end of day two. 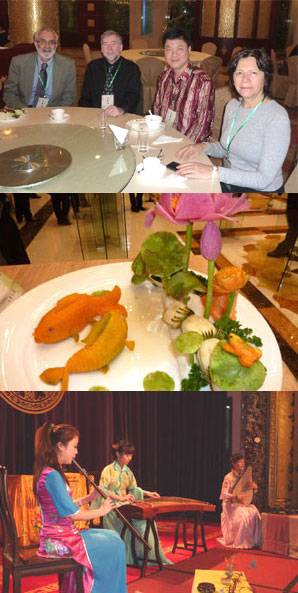 In June IVU supported the 13th International Vegan Festival, held near Malaga, Spain, with visitors from almost every country in Europe, plus Brazil, Hong Kong, Indonesia, and the USA.

Below, some of the music, lectures and the beach during the Festival:

There are several major annual events in the USA and one that always attracts overseas interest is the Vegsource Healthy Lifestyle Expo every October in Los Angeles, which has had recent visitors from China, UK, Switzerland, Australia, and France.

Also in October this year the Vegetarian Society of Ghana held their 2nd international event, with visitors from other West African countries, including IVU Council members Emmanuel and Erick, from Nigeria and Togo.

In February we migrated to a Facebook page instead of the old closed group, and already have almost 2,500 followers.  We look forward to more than doubling that next year.

In May all the IVU member organisations around the world voted, by a 95% majority, on a new definition of ‘vegetarian’ – emphasizing the positive of ‘foods derived from plants’. 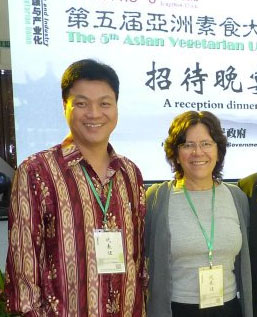 In August it was decided to update a century old tradition. For the first 50 years the IVU Congress met every three years, for the next 50 it was every two years. Now we’re moving on again and we’ll be supporting an event combining elements of a Congress and a Vegfest every year, there will be one near you soon!

In November the IVU International Council elected its first ever chairperson from Latin America, after 103 years Marly Winckler from Brazil is now leading the way.

Right: Marly in China, with Susianto Tseng, IVU Coordinator for Asia-Pacific, Vice-President of the Asian Veg Union, head of the Indonesian Vegetarian and Vegan Societies, more about him below…

Back in the UK

I’ve spent a lot of time in far flung places in recent years, so I wanted to get back in tune with what’s happening in the UK. Some of it:

Altrincham (near Manchester) – lots of meetings at Parkdale (top photo) the HQ of the Vegetarian Society UK as I’m a member of the Council, but I also use the library for historical research as we have all the journals going back to 1847. I took Susianto on a very useful ‘state visit’ in June as he was staying with us for a few days on the way to Spain.

Birmingham – to the office of The Vegan Society with Susianto to meet CEO Nigel Winter who did a great job there for many years, but has now moved on (2nd photo), replaced by Jasmijn de Boo from the Netherlands (on the right of the bottom photo).

Bristol – to the offices of Viva! and a meeting with co-director Tony Wardle.

Dilwyn, Herefordshire – the birth and final resting place of Dr. William Lambe, as part of my historical research of early 19th century vegans.

Godalming, Surrey   - to Compassion in World Farming (CIWF), partly to visit their new offices, and a chat with an old friend, now CEO, Philip Lymbery. Plus lunch with Josphat Ngonyo, Executive Director of the Africa Network for Animal Welfare (3rd photo), who was working there for four months and offering to help IVU in back Nairobi.

Liverpool – to the Viva! ‘Incredible Veggie Roadshow’ and very good it was, a great opportunity for me to catch up with a lot of people I hadn’t seen for a while, including Juliet Gellatley (4th photo) and Justin Kerswell from Viva!

Wolverhampton – a vegan barbecue in June; an animal sanctuary open day just out of town in August; and the amazing Midlands Vegan Festival in October (bottom photo, Vegan Society stall), where I gave a talk on vegan history.

Wales: Cardiff – the opera house with Hazel (our anniversary trip) Four Crosses, Powys – 3 course vegan dinner with 15 members of the Montgomery Voice for Animals, quite an achievement in that rural area. Llangollen – a highly successful ‘Vegan Café for a Day’ Machynchleth – the Center for Alternative Technology, and their veg café, with Susianto in June.

Early in the year I had the rather strange experience of watching myself over three episodes on SMTV, from interviews we did in Dubai a few months earlier. And throughout the year I did a lot more research on the early history of veganism, from 1806, all going into the blogs of course.

In between all that I do my bit for local history in the village where I live, which generated some interest as I was invited to give talks about it in three nearby towns, and contribute an article for the local mag. Plus a few reflections on rural trains and boats and roads that ended up amongst the weekly blogs, this being #97, and the end of another year.

2012 is the Chinese Year of the Dragon – time to bring on Herb, the Vegetarian Dragon...