Were there Vegans in the Ancient World?

We seem to be getting an increase in those silly lists of ‘famous historical vegans’, nearly all just nonsense and wishful thinking.  I’ve seen some recently claiming Pythagoras, Plato, and many others from ancient Greece and Rome were vegans, blindly copied around the internet. For those of us who take history seriously it is worth trying to understand what people were really doing, and why they chose their lifestyle, even if it’s not what we now see as ideal.

Some biologists say that the human body craves fat and sugar because those things were difficult to obtain in early human times, and small amounts of the right sort are beneficial. Perhaps that’s why in the Jewish/Christian Bible (Exodus 3:8) Moses promised a land flowing with (full cream) milk and honey. Of course that promised land of fat and sugar had to wait until the fast food of cheeseburgers, cheese stuffed pizzas and sugary cola. It seems that Moses didn’t anticipate obesity, diabetes and heart disease…

It is interesting that Moses did not promise endless quantities of animal flesh, maybe he knew they didn’t need that, and we do have a lot of examples of people in the ancient world cutting out the flesh, but keeping milk and honey. That happened in India at around the same time the Pythagoreans and Orphic Communities appeared in ancient Greece, all about 600BCE.

They were all surprisingly similar, suggesting some contact and exchange of ideas, maybe via the Zoroastrians in Persia, but there is no clear evidence of how it came about. The basis was metempsychosis, the transmigration of souls. In simplistic terms, if people can come back as animals in the next life, then you could be eating your grandmother. But that argument didn’t apply to milk (goats, sheep or cows were all used) and honey, or wool.

Nothing that Pythagoras wrote or said has survived, so we only have accounts from hundreds of years later. For example the Roman, Ovid (43BCE - CE17) in his ‘Metamorphoses’ said that Pythagoras “. . . was the first to forbid animals to be served up at the table” but also claimed Pythagoras as saying: “Nor is the milky juice denied you ; nor honey . . . . there is milk; and clover-honey. Earth is generous with her provision, and her sustenance.”

Porphyry (233-304 CE/AD) wrote: of Pythagoras: "As for his own diet, he was satisfied with honey or the honeycomb, or with bread only . . . his principal dish was often kitchen herbs, cooked or uncooked. Fish he ate rarely." – by that last comment he wasn’t even vegetarian, though other accounts vary, but the milk and honey are always there.

Plato (c.427-c.347 BC) in his ‘Republic’ seemed to point to an ideal future without flesh-eating, but there is no evidence that he made any attempt to put it into practice himself.

Several early Christian leaders also abstained from flesh out of desire for simplicity and self denial. One example was Saint Clement of Alexandria, who died around 220AD. In his second treatise, the Instructor or Tutor, Clement argues against flesh-eating, and adds :  “For is there not, within a temperate simplicity a wholesome variety of eatables - vegetables, roots, olives, herbs, milk, cheese, fruits, all kinds of dry food?  . . . .  those who feed according to the Word are not debarred from dainties - such as honey combs.”

In all these early texts there is no reference to eggs. They just seem to have been included within ‘flesh’, as in the predominant tradition in India.

We see something different in Porphyry (234-305CE/AD – an anti-Christian Greek philosopher within the Roman Empire) in his three-volume ‘On Abstinence from Animal Foods’ – quoting arguments put to him by others:

"If, however, someone should think it is unjust to destroy brutes, such a one should neither use milk, nor wool, nor sheep, nor honey. For as you injure a man by taking from him his garments, thus also, you injure a sheep by shearing it. . . . Milk, likewise was not produced for you, but for the young of the animal that has it. The bee also collects honey as food for itself; which you, by taking away, administer to your own pleasure."

But Porphyry then rejected these arguments, stating that the animals and bees benefitted from humans caring for them, so it was a fair exchange to use their products, whilst abstaining from their flesh.

It is extraordinary to see this level of debate taking place at all, more than 1,700 years ago, and it had moved on to an ethical discussion instead of the earlier purely religious matters.

It may have been just the meat-eaters accusing the ‘abstainers from flesh’ of hypocrisy by continuing to use other animal products.  However, we do know that there were quite a lot of ‘abstainers from flesh’, and in a big enough group it is always likely that a few would indeed have taken things to the logical conclusion of not using any animal products at all, and it looks like Porphyry might have been debating with them too.

There is no evidence that any of the people we know about took the ‘vegan’ route of eliminating milk, honey and wool – but we only know about people who wrote books, or were important enough to be written about. All the others just vanish and we will never know who they were.

Those lists of ‘famous vegans’ from ancient history really are nonsense, they were all what we would now call ‘lacto-vegetarians’, but that doesn’t mean there were no ‘vegans’ around, just that they weren’t famous enough . . .

To get our first named vegan we have to fast forward all the way to 1806.
[later... I've now received a suggestion that the Japanese Samurai, from the 11th century, were vegan - but all the references I can find say they routinely at fish, as well as rice and vegetables.
But... I've also been given further info on the 11th century Sufi poet, Al-Ma'arri, in Syria and Baghdad, who I knew was vegetarian, but does indeed appear to have been vegan. More about him in a future blog...] 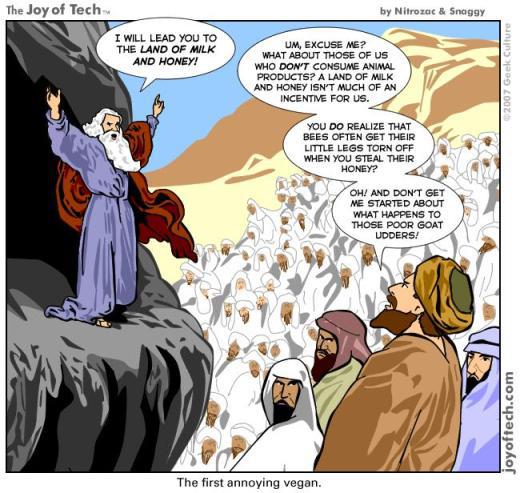 See also in the history section:
Ancient Greece and Rome
Ancient India and the East
Jesus and the early Christians