There were people who didn’t eat meat in Medieval Europe, and in Asia, but mostly for very different reasons to what we associate with veganism today.

In the western world the time after the fall of the Roman Empire - ‘the dark ages’, or Middle Ages or Medieval period, usually defined as about 500-1500CE. - was dominated by religion in both Europe and Asia, and many of those religions demanded various levels of abstinence and self-denial, even self-punishment.

For some this meant abstaining from eating flesh, not because they thought it was bad, but because it was good, so they would suffer by denying themselves. Inevitably some took this further than others, trying to eat almost nothing in order to feel more holy – they abstained from sex for the same reason, and some in the West wore hair-shirts which were deliberately itchy, while some Asian monks whipped their own backs.

It is difficult to see this as having much to do with what we now call veganism. They kept their milk and honey (and usually fish) and, especially in Europe, there was rarely any concern for animals, or for human health.

Some monasteries demanded inverted thinking of flesh as a ‘health food’, and ‘mercy’ that didn’t extend to animals: 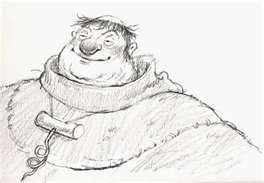 “[in English monasteries] Meat, once provided only for the sick, was now enjoyed by all in the infirmary; and when this was forbidden by papal statute, a ‘misericorde’, ‘the chamber of mercy’, between the infirmary and the refectory, where meat was freely allowed on the table. This, too, was prohibited by papal statute; but in 1339 the pope, recognizing that the prohibition was unenforceable, conceded that the monks might continue to relish their meat in the ‘misericorde’ provided that only half their number did so at a time, the other half maintaining the vegetarian rule elsewhere. [C. Hibbert, The English, a social history, 1989]

Most of these abstainers continued to eat fish, so Mr. Hibbert was misusing the term ‘vegetarian’.

We’ve also seen some claims that the Japanese Samurai, from the 11th century, were ‘vegan’, but again all available references show them as routinely eating fish. 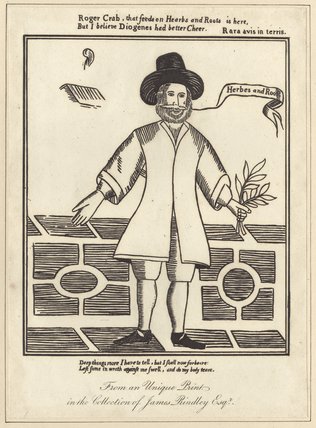 In 1655 Roger Crab published his ‘English Hermit’, an account of his life in a cottage near London.  In the introduction he specifically mentions not eating butter or cheese leading some to see him as ‘vegan’. But he also mentions his only clothing as sack cloth, and before long he is claiming to extend his self-punishment by living entirely on dock leaves and grass . . . [the picture is from his book]

In the USA in the 18th century there were some groups such as the Ephrata Cloister and Dorrelites, which have also been claimed as ‘vegan’. But these too were based entirely on self-deprivation to feel holier.

Howard Williams, The Ethics of Diet, 1883, on Medieval Europe:

". . . we look in vain for traces of anything like the humanitarian feeling of Plutarch or Porphyry [late Greek philosophers].. . .  In those terrible [medieval European] ages of gross ignorance, of superstition, of violence, and of injustice - in which human rights were seldom regarded - it would have been surprising indeed if any sort of regard had been displayed for the non-human slaves. . .   Chrysostom [347-407CE] seems to have been one of the last of Christian writers who manifested any sort of consciousness of the inhuman, as well as unspiritual nature of the ordinary gross foods . . . in the days of expiring Greek philosophy, Olympiodorous [5th century] and six other Pythagoreans determined, if possible, to maintain their doctrines elsewhere; and they sought refuge with the Persian Magi . . ."

Their refuge didn’t work out and they returned to Greece, but it is in the Middle East that we find an unexpected example of humanitarian thinking. During the time many call the ‘Islamic Golden Age’ (c.750CE-c.1258CE) philosophers, scientists and engineers of the Islamic world contributed enormously to technology and culture, and this was all based in Baghdad where Greek philosophy and science survived. The Europeans re- ‘discovered’ it from the Arabs centuries later.

Thou art diseased in understanding and religion. Come to me, that thou mayst hear the tidings of sound truth.
Do not unjustly eat what the water has given up, [i.e. fish] and do not desire as food the flesh of slaughtered animals,
Or the white (milk) of mothers who intended its pure draught for their young, not noble ladies.
And do not grieve the unsuspecting birds by taking their eggs; for injustice is the worst of crimes.
And spare the honey which the bees get betimes by their industry from the flowers of fragrant plants;
For they did not store it that it might belong to others, nor did they gather it for bounty and gifts.
I washed my hands of all this; and would that I had perceived my way ere my temples grew hoar!  [i.e. hair became grey – the poem continues on injustice…]

From: ‘Studies in Islamic Poetry’ by R.A. Nicholson, 1921 (on archive.org). Mr. Nicholson says there are ‘many passages’ of a similar nature, and discusses how Al-Ma’arri says he adopted what we now call veganism at the age of 30 (early grey hair…).

We have books about Al-Ma’arri, but there is some debate about where he got these ideas, and whether there were more like him. Various religious sources are suggested, but he objected to all organised religion, and left us guessing. A few more of his lines, converted into poetic English in 1904, but written almost 1,000 years ago:

Hunt not the beast; O, be thou more humane,
Since hunter here nor hunted long remain;
The smallest grub a life has in it which
Thou canst not take without inflicting pain.

The wooden shoes I do like best because
That skin did once live, aye, and even think.

See also:
Europe: The Middle Ages to the 17th Century
- Monasteries, St.Francis of Assisi, Leonardo Da Vinci and many more