Hygiene cleans up - naturally of course

In 1998 the American Natural Hygiene Society, after 50 years, changed its name to the National Health Association (NHA), on the basis that most people didn’t understand what ‘Natural Hygiene’ meant.

Quite right too, for me ‘hygiene’ has always been more about what I do in the bathroom than the dining room. 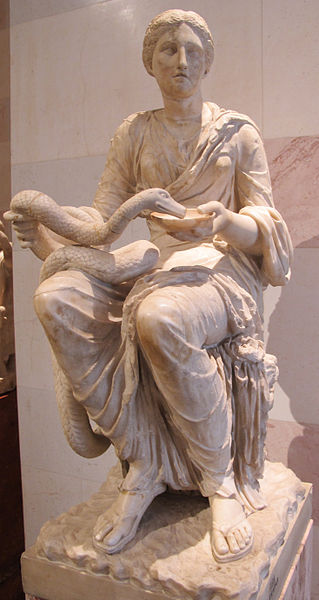 Hygeia, right, was the Greek goddess of health and cleanliness, While her father was more directly associated with healing, she was associated with the prevention of sickness. Her name is the source of the word hygiene (note the change of ei/ie spelling).

In the past, medicine men didn’t  think that food was anything to do with prevention of sickness, many still don’t of course, which might be why most people never did understand the concept of ‘natural hygiene’ as a diet.

The NHA traces its (American-only) history back to Sylvester Graham (1794-1851). He does not appear to have used the word hygiene, though he certainly argued that a totally plant-food diet was crucial to health.

The first clear use of the word was by Russell Trall MD in the early 1850s, when he wrote his first book, and opened his ‘Hygeio-Therapeutic College’ in New York city. His 1874 ‘Hygeian Home Cookbook’ was the first known ‘vegan’ recipe book.

In 1883 Susanna Way Dodds, cited by NHA, published her ‘Hygienic Cookery’, which had a long section drawing on the works of Graham and Trall, fully supporting a plant-food-only diet. But the actual recipes included eggs, dairy and even a section on meat – presumably she thought that was the only way to sell it.

An omission from the NHA records is Dr. Elmer Lee, initially of Chicago, relocated to New York in 1897. He was the editor of the Health Culture magazine which strongly promoted a plant-food-only diet, and in 1910 he published an American edition of the first British ‘vegan’ cookbook ‘No Animal Food’ by Rupert Wheldon. Lee was reported as both a hydrotherapist and a hygienist.

In 1916 J.H. Tilden MD, then aged 65 and cited by NHA as one of four major founders of natural hygiene, published a book on ‘Food’ in which he insisted that some animal food was essential for human health . . . There seems to have been little agreement about the diet at that time, though they do all seem to have agreed with the basic principle that food and lifestyle, not drugs, were the key to health. Prevention not cure.

The major ‘hygienic’ character of the 20th century was undoubtedly Herbert Shelton, and it was him who first coined the phrase ‘Natural Hygiene’, with fasting central to his ideas. If he had called it ‘Natural Health’ maybe the rest of us might have understood it more easily.

Shelton read the works of Russell Trall and Sylvester Graham in 1911, and had apparently adopted some form of vegetarianism by 1913, age 18, and by the 1930s he was clearly writing against the use of eggs or dairy products, along with tea, coffee and other stimulants.

In 1948/49 Shelton became the first President of the American Natural Hygiene Society (ANHS), probably unaware that a small group in England had also invented their own new word, and started the Vegan Society in 1944.

By 1948 there was a small vegan group in California, and in 1956 a British Natural Hygiene Society (BNHS) began – apparently still going, but there is also a business in the UK today called ‘Natural Hygiene’, their tagline: - ‘Providing solutions for all of your washroom needs’.

Meanwhile, in 1951, the Vegan Society had clarified that veganism was about avoiding all uses of non-human animals, for clothing, entertainment etc., not just for food. The Hygienists were naturally solely concerned with human health. 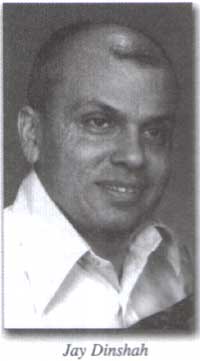 By the late 1950s Jay Dinshah, a life-vegetarian from New Jersey, was a board member of the ANHS and went vegan in 1957. He remained totally loyal to Shelton and the ANHS, returning to a leading role 20 years later, but in 1960 he also wanted to do something for the animals, and founded the American Vegan Society (AVS).

Jay Dinshah played a major role in promoting veg*ism in North America for the rest of the 20th century. In 1974 he co-founded the North American Vegetarian Society, using that as a platform to mastermind the hugely successful first ever IVU Veg Congress in the region, in Maine 1975. That event has been credited by historians as having kick-started much of the organized vegetarian/vegan movement in North America. In the early 80s he briefly returned to ANHS as acting Executive Director. Sadly we lost Jay in 2000, but his English-born wife Freya continues the work with AVS today (see: www.americanvegan.org )

Many of the leading members and supporters of the NHA today are a significant part of the ‘health wing’ of the vegan movement in the USA.

For more about the (American) National Health Association see: www.healthscience.org – if you come to the IVU Congress/Vegfest in California later this year you’ll get to hear, and meet with, many of the most prominent members of both NHA and AVS: www.ivu.org/congress/2012

I’m happy that NHA changed the name. I know a lot of people got used to it, but for me, and I guess for a lot others, ‘natural hygiene’ still sounds like taking a shower under a waterfall . . .