Some of those going to the 41st IVU World Vegfest in Malaysia, 2013, will have family and friends in Australia, and it’s very easy to get there from Kuala Lumpur, so you might like to go on down and see them afterwards. There are also a lot of veg events there in late October, or maybe you just want to see some of this great country.

Back in October 2010, I did all of the above, met up with some long lost cousins, and gave a couple of talks to some veg groups (self-funded, not paid for by IVU!)

Before leaving I was looking through some stats for the IVU website, which showed an unexpectedly high number of visitors from Australia. When I broke it down into the cities that were sending the most visits to ivu.org it showed that four of the top ten were in Australia. So there were clearly a lot of people down under finding something useful on the website, but we needed to improve our contact with them.

My general impression, as an outsider, was of several vegetarian societies around Australia which had been operating for many years, but some were now just ‘ticking over’. The more dynamic action seemed to be coming from the vegans, both groups and individuals, and I wanted to find out more about them.

I had a week of meeting veg groups in Sydney and Canberra, giving talks in each city, but first I was invited to a vegan party, over a pub in Sydney. I went with Mark Berriman, President Australian Vegetarian Society (www.veg-soc.org), who had kindly accommodated me during my stay there, and I met up with a lot of other great people.

These included Greg McFarlane, President, NSW VeganSoc (www.vegansocietynsw.com) – the two societies have frequent joint gatherings which is great to see happening as we’re all on the same path. Also Katrina Fox, vegan journalist (www.katrinafox.com), Aaron Scheibner, vegan film-maker (www.adelicatebalance.com.au), and so many more that it’s difficult to remember them all.  One common link was the excellent Vegan Voice magazine, sadly now gone, but replaced by ‘Living Vegan’ – (www.livingvegan.com.au)

The next evening I gave a talk, followed by some lively discussion, organised by Greg in a yoga centre with most people sitting on the floor. This was the one about how the first vegetarians were actually completely vegan. 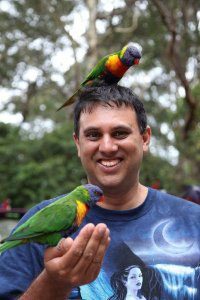 At the vegan party I had briefly met Sundara DeSilva, but we met up again a few days later in Canberra where he was setting up the projector for my talk on ‘Veg*ism from a World Perspective’ for the ACT (Canberra) vegsoc (www.vegetariansociety.org.au) – this one in a co-operative food store, they do seem to like unusual venues.

That gave us more time to get to know each other, and I realised that Sundara could be just the guy we needed to help IVU keep in touch with what was happening in the region. A couple of days later we met again, with a group of others, at the AuLac Chinese vegan restaurant in Canberra, and I persuaded the IVU Council to co-opt him as soon as I got home. (that’s him on the right, with some friends).

Canberra has something of a track record in helping IVU – our first Facebook group was set up by Edgar Crook, author of the History of Vegetarianism in Australia (www.ivu.org/history/australia); and we were put on Twitter by long-time IVU Patron, Andrew Freeman. I had the pleasure of meeting them both.

Sundara is, in my experience, unusual among Oz veg*ns in taking an equal interest in veg events all over the country. It is difficult for others as the big cities are separated by vast expanses of emptiness, and it’s just as easy these days for someone in Melbourne to communicate with London or New York as it is with Sydney.

But in Sundara we have someone who travels around the country a lot on his IT business interests, and has made a point of getting to know veg activists everywhere he goes, and makes a lot of use of the internet to bring people together in many ways. The most successful recently being his ‘Vegans in Australia’ facebook group:  www.facebook.com/groups/VegansInAustralia . A couple of months back Sundara was finally able to meet other members of the IVU Council in California, and brought a great bunch of other Aussies with him.

So if you want to visit Australia after the Vegfest in Malaysia, we’re putting together a page on the website with some travel info, and we’re compiling a list of all the late-October veg events (www.worldvegfest.org). You can even have your ‘photo by the bridge’ – just like San Francisco….  Here’s my photo of it from the ferry: