We know there were some journals, published in London in the 1850s, which included only recipes entirely from plant foods and water, and it is possible some were compiled into a book. But until we can find a copy of that - the first confirmed ‘vegan’ cookbook came from New York in 1874. 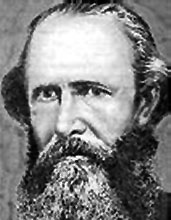 Russel Thacher Trall M.D. (right) was born in Connecticut, 1812, and was taken by his parents to western New York when he was a child, working for several years on a farm. He later studied medicine and settled in New York city in 1840, where he became a hydropathist.

In 1843 he opened a water-cure establishment, then expanded it in 1853 to include a medical school for both sexes, as the New York Hygeio-Therapeutic College, promoting totally drugless health.

In 1850 the first American Vegetarian Society was launched in New York, with Dr. Trall as the Recording Secretary, alongside his friend and mentor, Sylvester Graham, as a Vice President. Their mutual friend Bronson Alcott was a visiting teacher at Trall’s school.

Around the same time he published his ‘Hydropathic Encyclopedia’ in eight volumes – with some volumes promoting a diet exclusively of plant-foods and pure water, but others including eggs and dairy products, though with some hesitation. 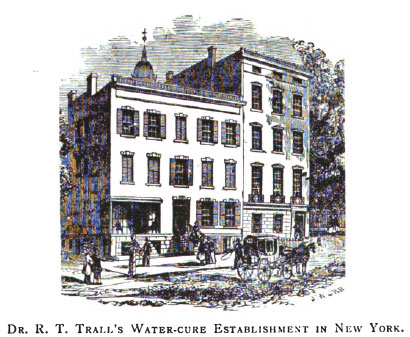 In 1854 Trall published the ‘New Hydropathic Cook-Book’, again with many recipes using eggs/dairy, even a section on meat for those demanding it, but describing the use of any animal products as a ‘compromise‘.

This was eventually resolved in 1862, when Trall came off the fence and changed the food at his establishment to consist entirely of plant-food plus water. He also settled on the term Hygeian (Hygeia was the Greek goddess of health), and this became a forerunner of the Natural Hygiene movement.

The change was explained in the Preface to his 1874 book ‘The Hygeian Home Cookbook’ (see below for a link to the complete book). He wrote:

“More than twenty years ago the ‘Hydropathic Cookbook’ was published . . . but for a dozen years past our table has been prepared without milk, sugar, salt, yeast, acids, alkalies, grease [butter], or condiments of any kind.”

He also objected to substituting any other animal products for flesh-eating. A few sample recipes:

RHUBARB TOAST. Peel, and cut the stalks in pieces, put them in a stew pan, add a little water, some stoned dates, and a few English currants well picked and washed; let them all cook until done, and then pour them over the toasted bread.

BERRY MUSH. Pick and wash the berries; stew them in a little water, adding a few stoned dates, stirring frequently until well cooked; then stir in very evenly a little Graham flour or oat-meal. Blackberries, raspberries, or whortleberries may be used.

GRAHAM PIE CRUST. Pour boiling water into wheat-meal and stir to a soft dough; roll out as thin as possible; sprinkle a little meal over the pie plate, and spread this as the bottom crust. Make the top crust by mixing wheat-meal with ice-cold water; add grated cocoanut if desired; knead as quickly as possible to a stiff hard dough; roll very thin; cover and bake immediately.

APPLE PIE. Make a crust according to either of the above recipes except the last; spread the bottom crust on the plate; on this spread a few dates, stoned and cut into small pieces; sift a little meal over this, and lay on the apples in slices or stewed; if the fruit is very juicy sift on more meal; cover with the top crust; have the fruit extend close to the edges of the crust, which should be wet so that the top and bottom crust will adhere at their edges; with a knife roll the edges under so that they will be smooth; bake immediately, being careful not to have the top crust much browned. As soon as done, cover tight with a dish about two inches deep, and let it steam till cold, when the crust will be very tender.

HYGIENIC BROWN BETTY. Prepare a quantity of apples for stewing, cleanse some raisins and currants, and stone some dates; the proportions may be according to taste or fancy; cut some Graham bread into thin slices; put into the stewing kettle a layer of the fruits; then a layer of bread, repeating and alternating until the kettle is nearly full, or until a sufficient quantity is prepared; then pour on cold water until it reaches within two inches of the top of the pudding; set it where it will simmer slowly without burning; cook until the bread and fruit are thoroughly soft, when the liquor will be very rich; serve warm or cold. Grated cocoanut may be added if its flavor is desired.

Trall also published at least 15 other books, and edited several journals on a wide variety of medical topics. Here’s the link to the complete earliest known vegan cookbook: The hygeian home cook-book; or, Healthful and palatable food without condiments – (on archive.org) by Russell Trall, New York, 1874.

For more about early vegans, see my free e-book: ‘World Veganism – past, present and future.” It has now been updated to include the above article, and more. You can download it for free, or replace your existing copy at: www.ivu.org/history/Vegan_History.pdf (5mb)