Prof. Francis W. Newman and the attempted 'vegan' revolution of 1871

Francis Newman was President of the Vegetarian Society (the original one in England) for about 12 years in the 1870s and 80s, and almost brought a dramatic change to the course of its history – if he had succeeded, the word ‘vegan’ would probably never have been invented all those years later. 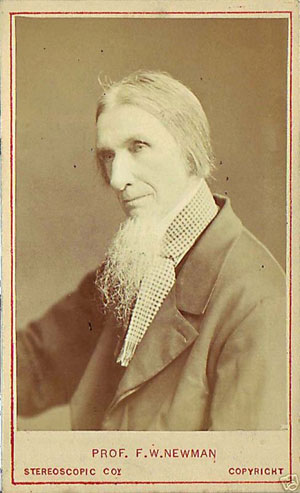 He was well known in his own right, but even better known as one of the Newman Brothers. They came from a conventional Church of England family, but elder brother, John Henry, converted to Catholicism and rose to become a famous Cardinal. Meanwhile Francis W. went the opposite way becoming a Baptist and then a Unitarian.

He was also actively involved in many social causes, including the abolition of slavery; equal rights, and votes, for women; support for animal rights including opposition to hunting and vivisection; and he eventually took the step of becoming vegetarian in 1867, at the age of 62.

Newman joined the Vegetarian Society at the lowest point in its history. The first president, the wealthy James Simpson, had died in 1859 leaving the Society with a lack of funds and leadership, it came close folding during the 1860s.

Some new leaders tried to be more progressive and the magazine had been renamed ‘The Dietetic Reformer’, but against opposition they still added the original ‘and Vegetarian Messenger’. The idea was to get away from both the exclusivity and the confusion of the word ‘vegetarian’ – dietetic reform was meant to include everyone interested in a plant-food diet, even if they weren’t there yet. It also avoided the endless problem of whether ‘vegetarian’ included eggs and dairy products, an idea which had never been fully accepted.

At the Society’s 24th AGM, on October 18, 1871, Francis Newman proposed radical changes. In a later presidential letter to The Times he summed up his position succinctly:

“…our aim is not to found a sect but to influence a nation.”

However, the influential members of the Bible Christian Church, which had played a major role in founding the Society, were never happy with this – they did indeed want to be an exclusive sect – perfection in (ovo-lacto) vegetarianism or nothing.

What Newman proposed was firstly to allow the Society to enrol associate members, based on four categories of pledges:

This was a remarkable list as it clearly put the plant-food-only-diet as the ideal, but the Bible Christians were insistent that their ‘promised land flowing with milk and honey’ (and eggs) was the ultimate truth. Newman (deeply but differently religious himself) said elsewhere that there were ‘a large number’ in the Vegetarian Society who did not use eggs/dairy, but this was the first time the Society had officially even acknowledged they existed.

But Newman went even further – he also wanted to change the name of the Society to the ‘Dietetic Reform Society’. As with the journal, this would have allowed the Society to support all those who were moving towards vegetarianism, as well as those who had arrived. If he had succeeded in that then the word ‘vegetarian’ would have been free to return to its original meaning of someone who just eats vegetation, or food derived from plants. There would then have been no need to invent vegans…

However, there were still enough Bible Christians in prominent positions in the Society to block these proposals. Prof. Newman managed to get an agreement for simple ‘associate membership’, but that was all. Even in that he was proved right, there were soon twice as many associates as full members, and the Society’s income more than doubled [for more on all above see 50 Years of Food Reform, Charles Forward, 1897].

Francis Newman said that he used some eggs/dairy himself, but kept them to a minimum and looked forward to alternatives which he anticipated might be one day processed from nuts. In an essay ‘On the Mission of the Vegetarian Society’ he wrote:

But whether we demand more milk or more meat involves the very same results. We cannot have much more milk unless more calves are born. The cows, I believe, have long since been kept in a milch state as long as possible. More milk must mean more cows and calves, more grazing land, more dependence on foreign corn.

. . . [on the use of eggs/dairy] We are in a state of transition. A future age will look back on this as barbarism; yet we are moving towards the higher and nobler development in becoming even thus partial vegetarians.

Just to be quite clear: This was the President of the Vegetarian Society describing eggs/dairy users as ‘partial vegetarians’, and the Society flourished under his leadership.

Soon after most of his proposals were rejected, a more radical group in London founded a Dietetic Reform Society, which then ran nationally in direct competition with the Manchester-based Vegetarian Society. Other ‘Dietetic Reform Societies’ soon followed, some as far away as in New Zealand and California. After he retired as President, Newman (a London Professor) took to referring to the ‘Manchester V. E. M. Society’ (=vegetable-egg-milk).

There were many changes of names and ideals, but the friction between London and Manchester continued for almost another 100 years, before they eventually merged in 1969. But by that time the Vegan Society had filled the gap in 1944.

My e-book World Veganism – past, present and future, has now been updated to include the above blog, a couple of older blogs, videos now working on Apple, and some more entries in the bibliography. You can download it for free, or replace your existing copy at: www.ivu.org/history/Vegan_History.pdf (now compressed to 5mb)