April 17-24 1990 World Vegetarian Congress, Tel Aviv, Israel The Congress will offer a full programme of talks, discussions, workshops and excursions as well as a variety of social events.

In the north of Israel is the vegetarian village of Amirim on the slopes of Galilee overlooking the Sea of Galilee and in a very pleasant peaceful setting. It offers accommodation in rooms or bungalows (all with private facilities) and excellent tasty vegetarian/vegan meals are provided.

Vegans need not worry as they will be well catered for.

The 29th World Vegetarian Congress will be held in Ramat Gan, city of gardens, in the centre of Israel, between the dates of 17-24 April 1990, under the auspices of the International Vegetarian Union and the Israeli Vegetarian Society. The programme will include lectures, workshops, demonstrations, social events and there will be optional visits to picturesque vegetarian villages, communities, plantations of sub-tropical fruit trees, medician and health plants and organic farm centres.

The above notice was repeated in the following two issues 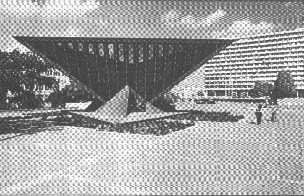 I have worked at The Vegetarian Society for over two years, but I had never heard of the World Vegetarian Congress until I noticed a glossy photograph of the sand and surf at Tel Aviv in the American magazine, Vegetarian Times. Inspired, I tore out the page, phoned the bank and made plans.

The first World Vegetarian Congress took place in Jerusalem in 1969, and since then it has been held regularly all over the world. It consists of a meeting of members of the International Vegetarian Union , with delegates from vegetarian organisations worldwide. There is a programme of lectures and optional tours, and each congress is open to everyone.

The congress attracts a gathering of like-minded individuals from all over the world, and you can be sure of meeting kindred spirits - expect some lively discussions too! I met a number of Dutch, Indian, Israeli and British vegetarians, plus representatives from the United States, Canada, Germany, Panama, Czechoslovakia and South Africa.

The venue chosen for this year's congress was Kfar Maccabiah, a campus-style conference centre on the outskirts of Tel Aviv. The rooms and conference facilities were of a high standard , the white buildings surrounded by amazing flower beds and my first sight of palm trees! The sun did not let us down either and on some days I was sorely tempted to lounge in the heat rather than enrich my knowledge of vegetarianism.

There was a full programme of lectures, mostly presented in English with a simultaneous translation service in Hebrew. I was quite surprised to discover that in many countries, vegetarianism does not end with avoiding meat and fish. One representative was shocked to see me drinking coffee, and told me that he did not drink alcohol or coffee, did not smoke, and did not eat any spicy foods. I replied that vegetable curry is the mainstay of my diet!

The talk on Anopsology promoted the use of raw food. The ideal human diet comprising sprouted beans and seeds, raw fruit and vegetables and their juices.
Another lecturer presented a Chinese dietary system which divides food into five categories, each related to a different part of the body. The idea was fascinating but highly complicated, so I was pleased to hear him conclude by saying that the best diet is to eat what you most enjoy in loving and comfortable surroundings! An Indian lecturer told us that sacred food leads to sacred thoughts and deeds - he said that a non-violent lifestyle would be impossible while we continued to eat meat.

There were lots of discussion on alternative medicine - by the end of the congress I was hopelessly confused as to whether I should drink sea water, aloe vera juice or wheat grass juice. We learned about traditional Arabic healing herbs, and about Chinese healing which involves not only acupuncture but also nutrition, herbalism, meditation and Shiatsu massage. Modern technology is being brought into ancient healing methods for example, the use of computers to accurately prescribe homeopathic remedies, and the use of electrically charged crystals in electro-crystal therapy. There were also two contentious talks on whether conventional medicine and complementary medicine can ever work hand ion hand. One point, however, was stressed again and again - that a positive state of mind is very important for self-healing.

Interesting results were given of clinical surveys into the effects of the vegetarian diet - the first, by a German medical student, proved that it has no adverse effect upon the growth rate of children. The second explains that a vegetarian diet is highly beneficial to the working of the immune system. Sugar, cholesterol and alcohol all depress the immune system, and in general vegetarians are more careful to avoid over-indulgence than meat-eaters. The balanced vegetarian diet contains high levels of vitamins A, C and E, beta-carotene and fibre, all of which are beneficial.

I have often told people that the vegetarian diet is THE green diet - and an American delegate proved just how important it is for our environment. Over half the land area of the US is involved with meat production - up to 30 per cent of the energy generated by US power stations is used for meat production, and up to 80 per cent of water is used in agriculture, to rear animals, and to irrigate the plants that are grown to feed animals. meat eating is directly implicated in desertification, deforestation and the Greenhouse effect. American vegetarians firmly believe that, even if the US were prepared to sustain serious ecological damage, current indications are that the USA simply cannot continue agricultural output at this level. The water table in the Western USA is being depleted at such a rate that within 30-40 years all agriculture in this area will cease.

The unmistakable fact is that vegetarianism is not just a desireable, ethical and humane diet. It is essential that the whole world turns away from an energy-intensive, land-intensive system of rearing meat, before meat eating destroys our environment for good.

Minutes of the IVU General Meeting held during the Congress