In 1889 the Deutsche Verein für natürliche Lebensweise (German Natural Living Society), founded in Leipzig by Eduard Baltzer in 1867 invited the two main British Vegetarian Societies and others in Germany to a Congress in Cologne, from September 11 -16. A good time was had by all, including boat trips on the Rhine for the first two days followed lectures and discussions on the remaining days. The event was very successful, with between 80-100 people at each of the lectures. As far as we know this was the first ever meeting of Vegetarian Societies from different countries, and it was agreed to arrange further international meetings. 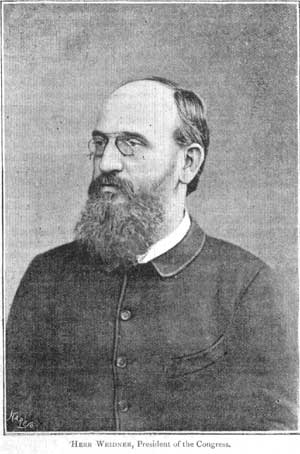 From The Vegetarian (London) :

From The Vegetarian Messenger (Manchester):


PROGRAMME of the first International Congress

Saturday, September 14th. -
9.30 a.m., Opening of the Congress ;
10.30, Conference respecting a periodical Congress of all Societies for hygienic reform ;
dinner ;
in the afternoon, a visit to the Cathedral and ascent of the towers ;
6 p.m., Supper for Children ;
8.0 p.m., the Rev. Prof. J.E.B. Mayor, Senior Fellow of St.John's, Cambridge, President of the Vegetarian Society, Manchester, will speak on "Why I am a Vegetarian" ;
Dr. Phil. Ang. Aderholdt, of Paris, will speak on "New Scientific Proofs respecting the Vegetarian System."

Sunday, September 15th.
10 a.m., Service in the English Chapel ;
Conference of the Members of the German Natural Living Society ;
11 a.m., public discourse concerning Hygiene ;
12, noon, general meeting of all members of the Congress ;
dinner ;
in the afternoon, visit to the Flora and the Exposition ;
7 p.m., public Festival ;
8 p.m., Banquet and musical entertainment.

Monday, September 16th. -
8 a.m., Breakfast in the Volksgarten, and aquatic sports ;
visit to the new Ringstrasse ;
10.30, close of the Conference ;
Dinner, followed by visit to the most remarkable places, monuments and buildings of Cologne ;
Supper ;
8 p.m., discourse of Dr. Med. Wehberg, Dusseldorf, on "Abstinence from Alcohol, and the Social-Economic position."

Tuesday, September 17th. -
Excursion to the Park and Royal Castle of Rhuhl, and other places in the neighbourhood of Cologne.