"The year 1975 was an important year for vegetarian advocacy.

With the formation of the NAVS [North American Vegetarian Society] the stage was set for the 23rd World Vegetarian Congress held in the late summer at Orono, Maine. The event marked the first time that the International Vegetarian Union held its congress on American soil. Arguably it was the most important gathering of vegetarians in the United States in the twentieth century."
- Vegetarian America, A History. Karen and Michael Iacobbo, Praeger, 2004 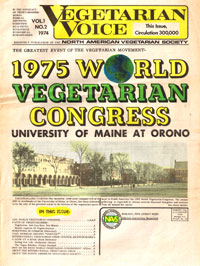 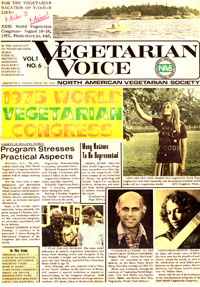 Cover right: Vegetarian Voice, Vol.1 No.6, (Nov/Dec) 1974
- Program Stresses Pratical Aspects
- Many Nations to be Represented
- Congress Exposition | Escorted Tours
- Make it Maine! Come to the Congress | Group Air Travel
- Registration Form | Congress Information | Local Veg. Societies
Cover photos:
middle right - Live and Let Live - British total-vegetarian Jenny Gage emphasizes that both humanity and the animals would be much better of in a vegetarian world.
Bottom-left: A plan for all seasons - The same strict adherence to natural vegetarian principles, that keeps Scott Nearing active and energetic at 91, also foretells a bright and healthy future for 4-year-old Anne Dinshah, and NAVS Vice-President Brian Graff at age 23. Prof. Nearing, who was honored with a "Man of the Year" citation by the Governor of Maine, will conduct a special workshop on vegetarian homesteading, on the Congress program. Both Anne and Brian have lectured at meetings and conventions.

Bottom-middle: "Congratulations to the Vegetarian World Congress - ' Happy eating!" - Gavin Macleod." Gavin can currently be seen on the Mary Tyler Moore Show, Saturday evenings on CBS-TV.
Bottom right: Vegetarian artiste - the gentle style and lovely voice of maria Illo have won her the plaudits of auiences around the world, as well as the admiration of such fellow performers as the great mime, Marcel Marceau, and Indian master musician Ali Akbhar Khan. Maria will be one of the headliners of the entertainment program of the 23rd World Vegetarian Congress. 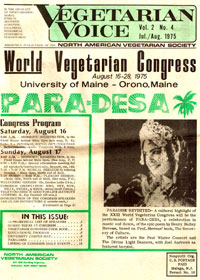 Cover right: Vegetarian Voice, Vol.2 No.4, (Jul/Aug) 1975
- Alphabetical List of Speakers
- Guided Tours at the Congress
- Vegetarian Congress Cookbook
- Educational Program: Saturday 16/Sunday 17 | Monday 18 | Tuesday 19 | Wednesday 20 | Thursday 21 | Friday 22 | Saturday 23 | Sunday 24 to Thursday 28 |
- University Campus Map
- Listing of Congress Daily Events
photo right: PARADISE REVISITED - A cultural highlight of the XXIII World Vegetarian Congress will be the performace of PARA-DESA, a celebration in music and dance, of the epic poem by Henry Bailey Stevens, based on Prof. Stevens' book, the recovery of Culture. The artists are the Paul Winter Consort and The Divine Light Dancers, with Joel Andrews as featured harpist. 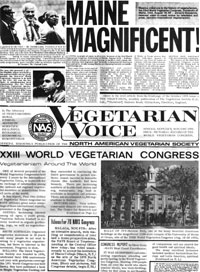 Reports from Vegetarian Voice ('official bimonthly publication of the North American Vegetarian Society') - 'Special Sept/Oct, Nov/Dec 1975 issue: Pictorial Record of the World Vegetarian Congress'
Maine Magnificent! -from the front page of the October 1975 issue of The Vegetarian (UK) - as below
Vegetarianism Around The World (link to same article in Veg. Times below)
Congress Report by Dixie Mahy - NAVS West Coast Coordinator
Vegetarian Ways of Life by Ellen Sue Spivack (same as 'Vegetarianism as a Way of Life' from the Veg. Times below, but without the pictures)
Planning and Organizing - the story behind the Congress
Lecturers | Classes - from many pages of photos
Maine line to Maine - from The Vegetarian (UK), October 1975, as below
Children - from 3 pages of photos - were you there?
Tennis Anyone? - Peter Burwash
Transportation - his and hearse... | Funeral For Famine
Para-Desa - performance of the epic poem by Prof. Henry Bailey Stevens
Food - catering for 1500 different requirements
The Delegation from India | Yoga | Displays | Banquet!
IVU Pioneers - VV printed the photo from the 1908 IVU Congress (link to 1908 page)
Dick Gregory | Media Coverage | Editorial - a team effort
International Vegetarian Youth Movement
Ithaca for '76 NAVS Congress
Congress Tapes, Books | NAVS affiliated local groups | 1976 Congress Information & Registration Form

Reports from The Vegetarian (UK), October 1975, with photos:
Front Page reports & pictures
Maine line to Maine - double page spread of reports and pictures
Short Letter - from the President of IVU to the Editor of The Vegetarian 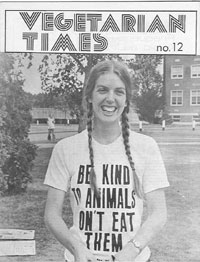 Reports from the Vegetarian Times (USA), no.12, all with photos:
Front Cover (73k graphic)
Congress Report
Pros & Cons - what individuals said about the Congress
Vegetarianism Around the World - reports from Societies (same as the one in VegVoice above)
Vegetarianism as a Way of Life - an individual view

other reports:
Comments by Richard Schwartz from his 'Brief History of Vegetarianism in the USA'
Agenda and Minutes of IVU International Council meeting, August 19
Agenda for the General Meeting, August 20
General Secretary's Report from the 1977 Congress - starts with a review of 1975