Until the 1960s IVU only accepted national veg organisations as members, and there had been none in the US or Canada sicne the 19th century, but there were many local groups. One of the main objectives of the Convention was to create the American Vegetarian Union - a union of societies rather than individuals - which could then join IVU. There were visitors from Canada present, see photo below, and the Canadian Vegetarian Union was formed the following January for the same purpose of joining IVU. The IVU General Secretary was actively involved, and other members of the Committee were present.

Breakfast in London, lunch in Scotland, an evening meal on the desolate sotuh-west cape of Iceland, sandwiches in the small hours at a rainswept airport in Newfoundland - on across Nova Scotia, and in the first full light of morning the BOAC Constellation turns southwards over Boston to land at La Guardia field, New York.

James Hough and I, unvaccinated and unrepentant, were kept back for interview with the Medical Officer.

After the M.O., the Customs. "Destination?" "Vegetarian Convention." "I never met a vegetarian! Are you one? Why?" I told him, and as he chalked my bags without looking inside he confided that his wife was that way inclined and he'd have plenty to tell her when he got home. At the Internal Air Terminal twenty minutes later we just caught the plane that landed us nearly a thousand miles away at Chicago in time for a very late lunch at Dr. John Maxwell's Restaurant on Van Buren Street. "Is that tomato soup?" "You wanna kremmertummayter?" I did. Then we had to hurry on again, ninety miles north-west by railroad and a speedboat across Lake Geneva to Ayer's Estate as darkness fell.

Of the Americans who worked for this result, and on whom now falls the burden, we shall surely hear more. This is the time and place to pay tribute to the Honorary Secretary of the International Vegetarian Union, Kaj Dessau of Denmark, who drove 56,000 miles around America, neglecting urgent family and professional affairs in Europe, to make the Union possible in a country that is really a continent. One morning at The Coffee Shop in nearby Walworth, a few American and European friends tried to show Kaj how they felt about his tireless idealism. They gave him a symbol of his work in America - an empty pocket-book. Not quite empty. There was a blurred, but still legible copy of the constitution of the American Vegetarian Union, unanimously adopted a few hours before, and a cheque negotiable in no ordinary bank, signed by all his friends, and pledging them to pay him any amount of goodwill at any time the I.V.U. might need it.

There were memorable lectures. Henry Bailey Stevens spoke on The Recovery of Culture. Something of Scott Nearing's lovable forthrightness is reflected in his article elsewhere in this issue. On the European side, Ralph Bircher came from Zurich to deliver a most important paper, now appearing serially in the Vegetarian Messenger. Gunnar Hedfors explained in easy, happy style the development of his Swedish youth and sports movement, and showed colour films of it that ought to be seen soon in this country. James Hough recalled-almost remembered! - the history of the British movement, and I tried to put, as the only adequate solution to the developing world food crisis, the argument for a vegetarian economy that Lord Boyd Orr has since told me is "incontrovertible."

Five of us bundled in with Kaj to be driven all the way to Vermont, via Canada and Niagara. We were together for a night or two at Scott Nearing's, and then I reluctantly parted from my friends and drove with Henry Bailey Stevens into New Hampshire, where I caught the night train from Boston to New York.

When the Mauretania passed down the Hudson River on a misty afternoon two days later, the Statue of Liberty was invested with a strange aura of sunlight. As the distance widened the light faded and the great figure seemed to gesture urgently across the water. I left the starboard side for a last look at America, and behold, the Manhattan skyline was gone without a trace into the haze. "And like an insubstantial pageant faded. . . . " Much of the American scene had seemed to me hectic, impermanent. But, perhaps, by the waters of Lake Geneva, and verily in a valley in Vermont and in a New England apple orchard, I had found American realities to lighten whatever night may fall and to endure, as surely as I saw Liberty hold her torch aloft until all America had sunk into the sea. 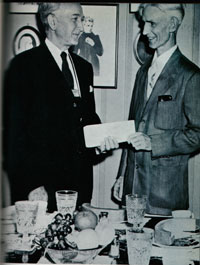 On the eve of the American Convention, Henry Bailey Stevens (right), author of "The Recovery of Culture," receives from Curtis Freshel, of the Millennium Guild, New York, the new Award of $1,000 for the best humanitarian work of the year. The presentation took place at Caroline's, the Milwaukee vegetarian restaurant founded by Mr. Henry Nunn. (photo: "Milwaukee Sentinel")

In 1968 Geoffrey Rudd, who was by then Secretary of the Vegetarian Society (UK) and General Secretary of IVU, undertook a lecture tour of North America. His report included the following comment: ". . . I had met Jesse [Dr Jesse Gehman] at the first American Vegetarian Convention, near Milwaukee in 1949 - James Hough was there, too . . ."

We have subsequently found 3 photographs in the cellar of the VSUK offices, probably taken by Mr. Rudd. These are reproduced below, complete with the handwritten notes that were on the back - if anyone can identify any of the people in the pictures - or has any other info - do let us know! 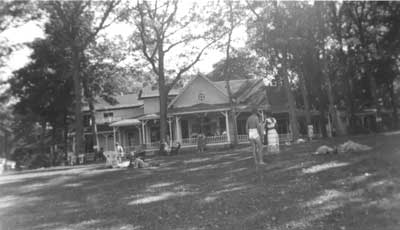 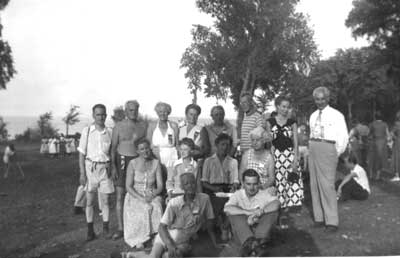 Some of the Canadian Delegates Camp Aurora Aug 1949 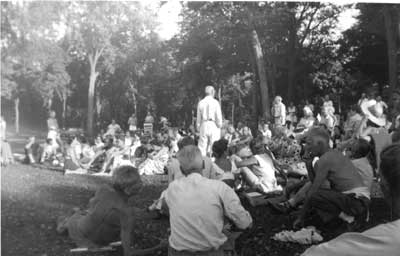 The following items are all from the Vegetarian (later World Forum), edited by Geoffrey Rudd in the UK who was present at the Convention: 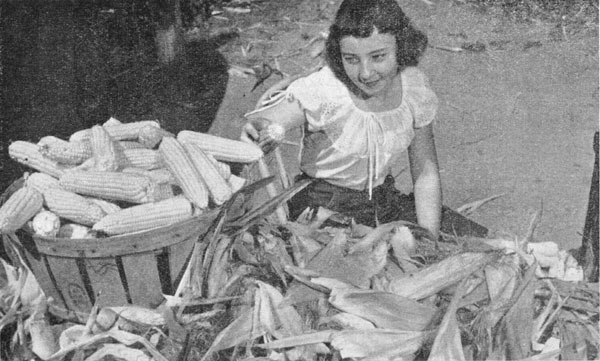 AN OLD AMERICAN CUSTOM
One of the Camp Aurora helpers de-husking a pile of corn-on-the cobs for the 1949 Vegetarian Conventioners at Lake Geneva, Wisconsin. 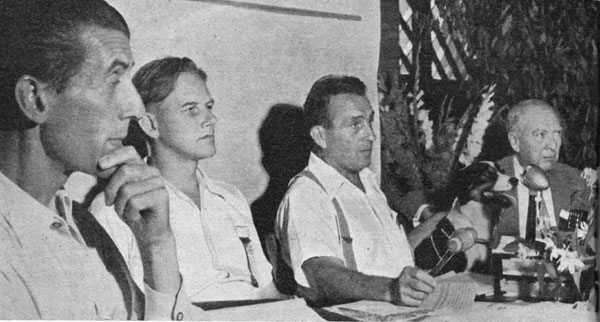 PROMOTERS OF THE FIRST AMERICAN VEGETARIAN CONVENTION
Dr. Jesse Mercer Gehman, with gavil ready for instant action, presiding at one of the general discussions. With him are (on left) Mr' Kaj Dessau, Secretary of the I.V.U.; Mr. Neil L/ Ehmke, Vice-Chairman and President of New York Vegetarian Society, and (right) Mr. Howard B. Bishop, Convention Treasurer and Founder of the Humane Engineering Association. 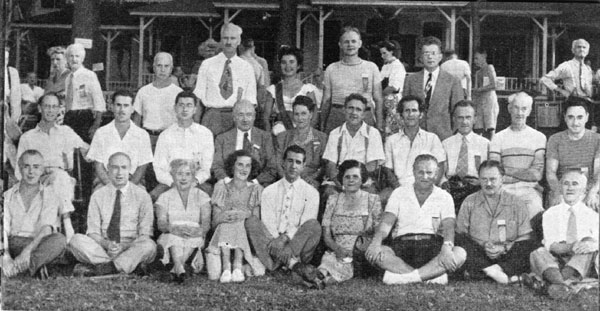 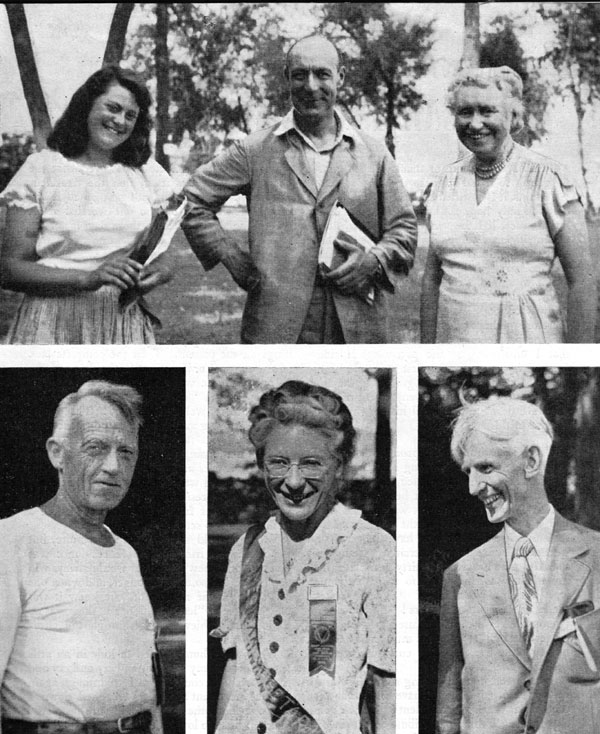 INTERESTING CONVENTION PERSONALITIES
Happy snaps of some of the delegates taken by the Editor of The Vegetarian. At the top are (from left): Three Britishers, Miss Bridget Wilson, Rev. Harold J. Kemmis and Mrs. E. M. Gorgon Kemmis. (Below, from left): Mr. Scott Nearing, the well know political writer; Miss June Kimball, who is doing so much for the movement in Canada; and Mr. Henry Bailey Stevens, the author of the Recovery of Culture. 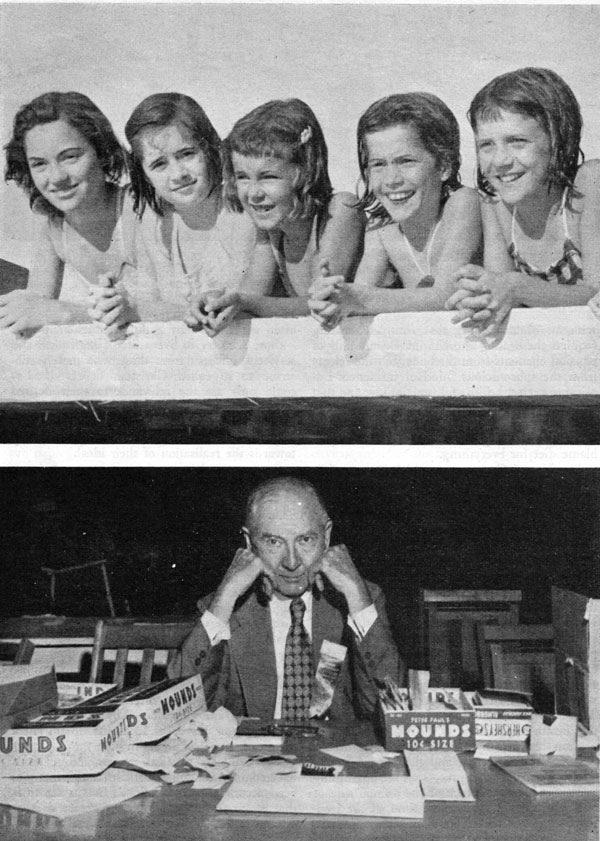 CONVENTION CAMEOS
Top: some of the younger generation present and, above, is Howard B. Bishop the Convention Treasurer, who was kept hard at work from the moment he arrived at Lake Geneva. He is seen shortly before dawn after directing 350 delegates into accomodationmeant for 250!

Below: Helen and Scott Nearing relax between "sessions." These two delegates from Vermont are vegans and own a large estate on which they produce maple sugar, syrup, and have with their own hands built their home and guest houses. 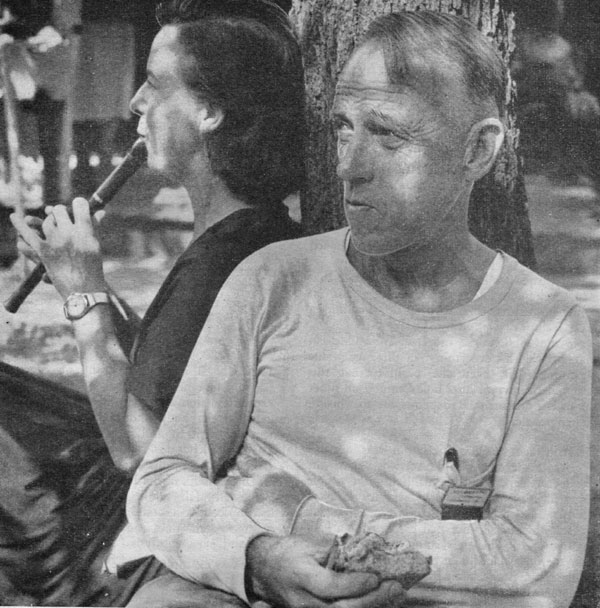 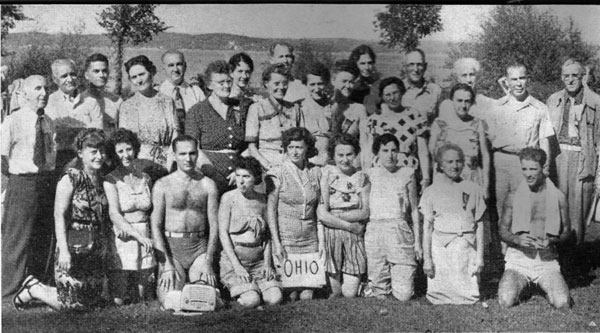 OHIO CONTINGENT
During the Convention visitors from each State got together to organise the movement in their particular area. Here we have the Ohio group. On the extreme left is Mr. Ernest Webbe, who writes regularly and forcefully in the American Vegetarian.