An extract from the Vegetarian Federal Union Secretary's annual report, given in May 1891:
". . . Probably the most important work of the Union was the conduct of the International Vegetarian Congress in September last, full details of which were duly published.
"Suffice to say here that the Congress was admitted by all, save the most unfriendly of critics, to have been a great success. Both in the accredited representatives, as also in the papers read, the meetings were truly international. The sitting extended over three days, and besides the English delegates, there were those from America, France, Germany and Italy, and elsewhere. The proceedings of the Congress were reported from day to day by the leading newspapers, and from them were extensively copied by the provincial press. The Daily Graphic sought to catch and portray the expression of our leading men ; unfortunately, however, with but scant success. Many articles and leaderettes were written on the Congress, ranging from partial commendation and feeble satire to stern reproof. By these means a considerable amount of attention was focussed upon our cause, which could not fail to be of the utmost importance." 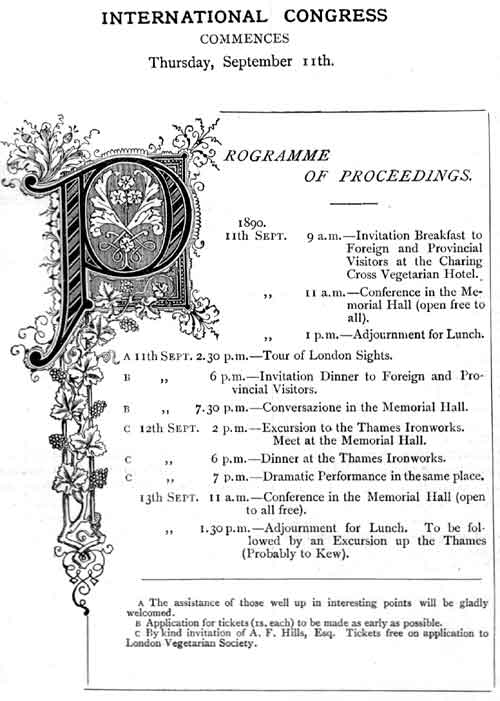 An interesting visitor to the Congress was a 20 year old Indian law student by the name of Mohandas K. Gandhi (later the Mahatma). He contributed regular articles to The Vegetarian in 1891, and the June 20 issue contained an interview with him, which included the following: "It was at the International Congress that I may be said to have known the L.V.S. [London Vegetarian Society, of which he later became a committee member]. That the Congress was sitting I knew by the kind courtesy of Josiah Oldfield, who heard of me from a friend and was good enough to ask me to attend it."