The first Indian Vegetarian Society that we know of was established in 1889 in the Punjab, but it was not immediately reported in England. There was apparently an earlier society in Bombay but we have no specific details of that (see below).

In 1890 or 91 Mohandas K. Gandhi joined the committee of the London Vegetarian Society and contributed many Indian perspectives to their weekly journal The Vegetarian. The full collection of his articles is available.

From The Vegetarian Messenger (Manchester, England), May 1892, p.142:
For a long time past several zealous friends - both Indian and European - have been using their influence for the establishment and promotion of Vegetarian principles, and the formation of organisations to carry on this work. Some of these friends combined a few years ago to form a society, but the support accorded was inadequate, and the society did not long continue in existence. The spirit which animated these friends, was, however, unquenched; and as time has passed along, new sympathisers have been enlisted, the number of willing workers and supporters has increased, and now another effort has been made in Bombay, and we hear from Mr. D. D. Jassawalla that the "Natural Living Vegetarian Society" has been borught into existence. It combines in its founders both Indians and Europeans, and is open to receive all who will join it without distinction of race. The friend to whose unfluence the former effort was due is Mr. Byramji D. Panday, who is the treasurer of this new society, the president being Mr. D. Gostling, and the hon. secretary Mr. Jassawalla. The society's formation has been noticed in some of the Indian papers, and in one is an article "by an occasional reporter," which is apparently intended to poke fun at the new Vegetarian Society by announcing a meeting to start " A Beefsteak and Mutton Chop Society" for Bombay. The chairman of the meeting is represented as proposing "that the society shall be called 'The Society of Unatural Livers' in order to be distinguished from the 'Natural Life Vegetarian Society' recently started".

From The Vegetarian Messenger (Manchester, England), September 1892, p.280:
India. - We have received a note from Mr. Bacha Ram Chatterjee, who writes from Quetta, Beluchistan, and says: "I am glad to inform you that a Vegetarian Society has lately been established at this, the local Arya Samaj, and this society has about seventy Vegetarian members on the rolls. Lectures are being delivered fortnightly, on the advantages of Vegetable diet. The educated Indians are taking interest in such movement." We heartily wish the new society success.

The following item was sent by the Soyfoods Center: Source: The Vegetarian Messenger and Health Review (Manchester, England). 1908. Aug. p. 201.
The section titled "Parsee Vegetarian Society (Bombay)" states: "This Society has been recently formed in Bombay to consist exclusively of Parsees. The members will abstain from fish, flesh, fowl, and eggs, and from all alcoholic drinks and narcotic drugs, as opium, tobacco, etc. The founders aim to bring again the Golden Age referred to in their ancient teachings. Meetings open to outsiders will be held frequently, and the following subjects will be discussed: Religion, humanitarianism, psychology, ethics, medicine, physiology, scientific economy, etc., etc. The hon. Secretary is Jamshedji Dhanjibhai Shroff, 54, Cawasji, Patel Street Fort, Bombay."

'Parsee' (or Parsi) is an ethic group in western India, originally from Persia and following the Zoroastrian religion, that society was mentioned again in the early 20th century. A 'Bombay Natural Living Society' was also mentioned.

1923 - The first Indian involvement with IVU was at the 1923 Congress in Stockholm, Sweden,
the following extracts are from the reports of that Congress:
... After extending a hearty welcome to all, he called upon the Hon. Congress Secretary, Madame Lombard (Stockholm), to read the Roll Call of the Delegates. Each rose as his or her name was called. The following is a full list : .... India - M. Dayal, M.A., Oxon ... We give the full list of papers in alphabetical order :- ... Dr. D. R. Har Dayal on " Vegetarianism in India," ...
Delegates normally represented a member society, but we were not told which society Dr. Dayal represented. There was no mention of India in the reports of the subsequent Congresses in the 1920s or 30s.

1947 - From the reports of the 1947 IVU Congress, held in Stonehouse, England:
... Messages of good wishes to the Congress were also received from the Bombay Humanitarian League, ... Dr. P. D. KAPUR (Hon. Secretary of the India Society for the Protection of Animals) and Mr. HENRY POLAK (at one time associated with Mahatma Gandhi, in South Africa) also addressed the gathering. [this refers to a post-congress meeting in London]

1954 - the IVU Executive Committee received a request to hold a World Vegetarian Congress in India in 1957, but it was decided 'must be held in Europe out of loyalty to the nations who had built the IVU.' - all Congresses had been in Europe up to then. The plans for a 50th anniversary Congress in Germany in 1958 eventually fell through and the offer from India was accepted.

1955 - Extracts from the minutes of the Business Meeting at the 1955 IVU Congress, held in Paris, France:
Present: Honorary Officials and Official Representatives of National Societies including ... India, ... ... The following additional Vice Presidents were elected:- (present Vice-Presidents being re-elected en bloc): Mr.J. N. Mankar (India); Mrs Nehna Vakil (India); ... Mrs Rukmini Devi Arundale (India); Mr Magenlal Shah (India); ...
... Humanitarian Societies: It was agreed to admit local groups and Societies with humanitarian ideals or with the object of furthering vegetarianism provided the control is vested in vegetarians. ... [this appears to have been for the benefit of the Bombay Humanitarian League]
In Indian and Other Religions - A Historical Survey subnitted to the Congress by J. N. Mankar 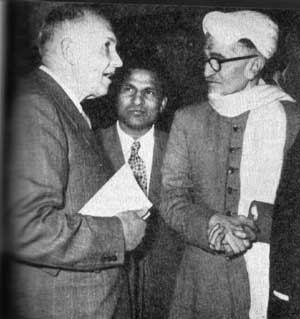 1960 - at the 16th IVU World Vegetarian Congress, held in Germany, the President and Past President had both died since the last one, and the Deputy President was unable to attend. The Congress invited Rukmini Devi Arundale to take the chair. She had been a Vice-President since 1955 and remained such until her death in 1986. - the Bombay Humanitarian League, the Ceylon Vegetarian Society, and Vegetarian Club of India were recorded as a members of IVU, and the Indian Vegetarian Congress joined during the Congress.
The Rajkumar of Vizianagram was elected to the IVU Executive Committee during the 1960 Congress, and remained until 1967, possibly 1969 (records are missing)
'Report from India' (J, N, Mankar) and 'An Eastern Message' (T. L. Vaswani) - from The British Vegetarian Nov/Dec, 1960
A Message from India - talk by Rukmini Devi Arundale at the Congress 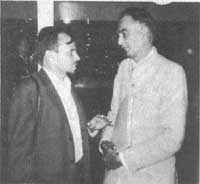 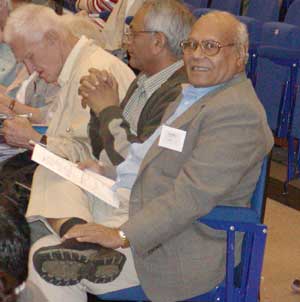 1990 - Surendra Mehta elected as President of IVU, the only President ever to come from outside of Europe or North America, He was re-elected for the statutory three terms, until 1996.

1993 - 30th IVU World Vegetarian Congress, Madras, India - during the Congress, Diana Ratnagar of Beauty Without Cruelty (India) was elected to the IVU Council. She remained on the Council until 1996.

South Asia in the 21st Century