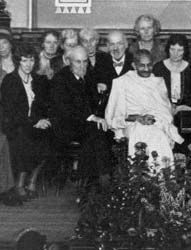 In June, 1888, a group of vegetarians in London decided to end their status as a branch of The Vegetarian Society, based in Manchester, and become the independent London Vegetarian Society (LVS). Their office was at the Memorial Hall in Farringdon Street.

October of that same year saw a 19-year-old Indian, Mohandas K. Gandhi, arrive in London to begin his studies as a lawyer. On leaving home he had made a vow to his mother that he would not eat meat whilst in England, in accordance with his family's Hindu beliefs.

After a few difficult months, sometime early in 1889, Gandhi found a vegetarian restaurant in Farringdon Street, the 'Central' Restaurant, just along the road from the Memorial Hall. The restaurant also sold books and magazines and he bought a copy Henry Salt's 'Plea for Vegetarianism', which persuaded him to become a vegetarian by choice, as an important decision in its own right instead of just a religious requirement. But he was grateful to his mother the vow she had made him take.

In October 1889 members of the LVS agreed to create the Vegetarian Federal Union (VFU), intended to bring together all the vegetarian societies throughout the world. Some of them had attended the first ever International Vegetarian Congress the previous month in Cologne, Germany, and had offered to host the next Congress in London in 1890. 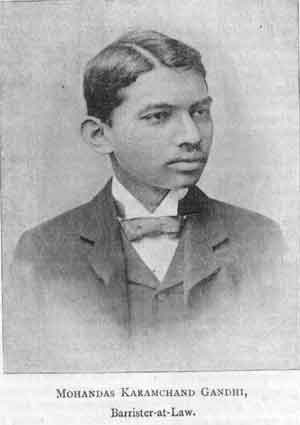 By this time Gandhi had become a regular reader of the weekly newspaper, The Vegetarian, published in conjunction with the London Vegetarian Society and had become friendly with its editor, Josiah Oldfield. In September 1890 Gandhi attended the 2nd International Vegetarian Congress in London, as a result of an invitation by Mr. Oldfield. This was organised by the LVS on behalf of the VFU.

A few months later, January 1891, the LVS held its Annual General Meeting and Gandhi, still only 21 years old, was elected to the Executive Committee. He began writing aticles for The Vegetarian, contributing more than a dozen items over the next few months.

In May 1891, the LVS appointed Gandhi as their delegate to the VFU meeting in Portsmouth. This was held in conjuction with the 'May Meetings' of The Vegetarian Society (Manchester) and he gave a talk on 'The Foods of India'. His contribution was considered important enough to get top billing in the next issue of The Vegetarian Messenger, (Manchester) and the text of his talk was reproduced in full. One of the other speakers that day was Henry Salt, whose book who had made such an impression on the young Gandhi two years earlier.

On June 12, 1891, Gandhi sailed from London back to India to start his career as a lawyer. The Saturday before he left he hosted a farewell dinner for his vegetarian friends, and the final comment reported in The Vegetarian was: ". . . Mr. Gandhi replied and pointed to the hope that a future congress of the Federal Union would be held in India."

Between 1894 and 1903 Gandhi continued to send articles to The Vegetarian, now from South Africa where he was living and working. He was implementing the principles of non-violence and passive resistance, first advocated by Count Leo Tolstoy - and which Gandhi probably first read about when they were published in The Vegetarian in December, 1889.

During the first few years of the 20th century the London-based Vegetarian Federal Union came to an end, but in 1908 the International Vegetarian Union (IVU) was founded, with a much more global outlook. The new Union was launched at the 1st World Vegetarian Congress in Dresden, Germany. The London Vegetarian Society became a prominent member of IVU and, in 1926, hosted the 6th World Vegetarian Congress at their long time home - the Memorial Hall in Farringdon Street.

By this time, of course, M. K. Gandhi had become world famous as the Mahatma. In his autobiograhy of 1925 'Expreiments with Truth' Gandhi recalled many incidents from his early days with the London Vegetarian Society. 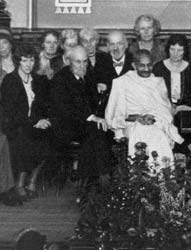 In 1931 Gandhi visited in London for talks with the British Government about Indian independence. The LVS arranged a special meeting for him to address their members, and at his side during his talk was his old friend and mentor, Henry S. Salt. (see photo right)

The events of the following years inevitably limited any contact between Gandhi and his vegetarian friends from the West, but he remained true to the principle he had adopted after reading Henry Salt's book way back in 1889.

The IVU had to abandon its Congresses during the war years, but was re-founded in 1947 with a Congress in Gloucestershire, England, during the first week of August. Hopes were high of moving foward in peace.

Many of the foreign delegates had to travel home via London, so on August 5th, the LVS arranged a meeting for them in the city. The records note that two extra visitors attended: "Dr. P. D. Kapur (Hon. Secretary of the India Society for the Protection of Animals) and Mr. Henry Polak (at one time associated with Mahatma Gandhi, in South Africa) also addressed the gathering." They must have been hoping to re-establish contact with the Mahatma himself . . .

On January 30th, 1948, Gandhi was assasinated at a prayer meeting in India.

Throughout this time all the IVU World Vegetarian Congresses had been held in Europe. Gandhi's wish, made in 1891, that a Congress would be held in India did not come true during his lifetime. However, by the early 1950s a group of Indians were working hard to achieve that aim - and they finally succeeded in December 1957 when the first World Vegetarian Congress to be held outside of Europe was convened in Bombay, Delhi, and Madras. It was an impressive event, with particpation by most of India's senior statesmen, including the President, the Prime Minister and at least five cabinet ministers

In his inaugural speech, Dr. Rajendra Prasad, President of India said: "I see before me a gathering of convinced and confirmed vegetarians. Vegetarianism as a movement has been going on in Europe for a long time and Mahatma Gandhi in his Experiments with Truth mentions a number of books proving the superiority of vegetarian food from different points of view. He also mentions a Vegetarian Society in London of which he was an active member during his student days in the early nineties of the last century."

The Welcome Address by Rukmini Devi Arundale M.P., Chairman, All India Reception Committee included: "I hope, as a result of this Congress, Government itself will be convinced of the necessity of promoting vegetarian diet at least from the nutritional and economic point of view, if not for humanitarian reasons, though I believe that the Government of a people who call Gandhiji the Father of the Nation should be happy to govern in the light shed by his principles. Two of our greatest leaders, Dr. Annie Besant, who was my own Guru, and Gandhiji, were of the opinion that they would rather not live than kill an animal, bird or fish for food."

If Gandhi were still alive he would have been 88 years old - and would certainly have been the guest of honour at the Congress.