Exactly 45 years ago today, on Aug. 16, 1975, the World Vegetarian Congress opened at the University of Maine in Orono. Historians have called the two-week long event “the most important gathering of vegetarians in the United States of the 20th century.” The significance of the 1975 congress comes from the publicity it generated for meat-free eating, the alliances it forged between vegetarian activists, and the organizations its attendees went on to create.

Leading vegetarians of the era were in attendance, including Maine’s most famous vegetarians, Helen and Scott Nearing, who preached that the good life is meat-free and were the reason the congress convened in Maine. In 1975, Scott Neraing was a vice president of the International Vegetarian Union, which formed in Germany in 1908 and had been hosting congresses ever since. Both Nearings were regular speakers at these international events, including the previous congress held in 1973 in Sweden.

In the middle of the century, mainstream society mostly ignored vegetarians and meat-free eating. But following the long slump, the visibility of vegetarianism in America was growing again by the mid-1970s, helped by the 1974 publication of “Diet for a Small Planet,” by Frances Moore Lappé. Still, the American vegetarian movement lacked national leadership. When the International Vegetarian Union agreed to bring its 1975 congress to North America for the first time, the IVU established a host committee chaired by the late H. Jay Dinshah, who had founded the American Vegan Society in 1960.

His wife, Freya Dinshah, current president of the American Vegan Society and editor of “American Vegan” magazine, told me during a recent phone conversation that the first thing the committee did was realize “there was no national vegetarian society and this would be a good time to form one.”

The North American Vegetarian Society came into existence in 1974 with the mission of hosting the 1975 event in Maine. Its co-founders included the Dinshahs and the Nearings, and the nonprofit has been guided since by Brian and Sharon Graff.

Even before the congress took place, then, it had already created a new advocacy group, which went on to host events ever since, including the Vegan Summerfest held at the University of Pittsburgh Johnstown each July (though not this year, because of the pandemic).

“The congress was the big impetus that got everything going,” Dinshah said. She estimates that before August 1975 there were roughly 10 local vegetarian groups scattered across the country. Within a year of the conference, she said, that number rose to more than 60. 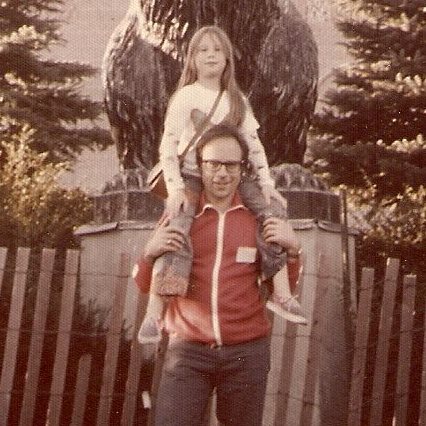 “It brought together some amazing people as speakers and presenters, and a lot of other people who would be inspired to do things in the future,” Dinshah said.

One notable attendee who was propelled into action by the conference was Holocaust survivor Alex Hershaft. After the congress, Hershaft founded the Vegetarian Information Service, hosted small vegetarian conferences, and then in 1981 co-founded the Farm Animal Rights Movement, which has played a significant role in advancing the American animal rights movement.

“The congress was a life-changing experience for me,” Hershaft told me by phone. “I became vegetarian in ’61, and it was a very private life event for me. It was a little like being gay 30 or 40 years ago.”

At the time, he never told anyone he was a vegetarian, which is why being surrounded by more than 1,000 vegetarians in Maine had a profound effect on him.

“I tear up to this day when I think about the congress,” Hershaft said. “It was a huge revelation for me. I decided on the first day that I would devote the rest of my life to veganism and vegetarianism.”

Another person who attended the event and went on to have a significant impact on the modern vegetarian movement is Victoria Moran. She spoke at the congress and hosted the event’s fashion show. She went on to become a best-selling author of vegan and vegetarian books. Her 2012 “Main Street Vegan” book shares its name with the academy she runs in New York City and a weekly podcast she hosts on Unity Online Radio.

“The congress solidified in the American consciousness that this is a global movement that is a force to be reckoned with,” Moran told me.

Moran said the mainstream media coverage of the 1975 event was one reason the congress had such a lasting impact.

Karen and Michael Iacobbo, whose quote from “Vegetarian America: A History” I referenced at the beginning of this column, write in their 2004 book that: “All three major television networks of the era, ABC, NBC, and CBS, along with dozens of newspapers and magazines, covered the event.”

According to Dinshah, activist Nellie Shriver was responsible for getting coverage from so many journalists.

The New York Times wrote about the Maine event in its Aug. 22, 1975 edition and the same story ran on the front page of the Portland Press Herald the following day. “Perhaps the only clue that the 1,500 black, white, brown and yellow people from 30 countries who have gathered here for the World Vegetarian Congress don’t eat flesh foods is to look at their feet,” the Times observed. “Most of them eschew leather for rather tacky looking shoes made of canvas, plastic or rubber – and some of them don’t wear any shoes at all.”

In her talk at the event, Moran praised non-leather shoes, which – just like vegan food – have improved a lot since the 1970s.

Other speakers included comedian and civil rights activist Dick Gregory; gardening expert and Mainer Eliot Coleman; Sri Satguru Jagjit Singh Ji Maharaj, the spiritual leader of the Namdhari Sikhs; and Rosalie Hurd, author of the 1968 vegan cookbook “Ten Talents,” which was reprinted in 2012. The program featured lectures and workshops the first week and local tours the second; the bus tours to the Nearing’s homestead in Harborside proved popular.

After the conference, the North American Vegetarian Society published a “Pictorial Record” of the event, which included these comments about the Nearings: 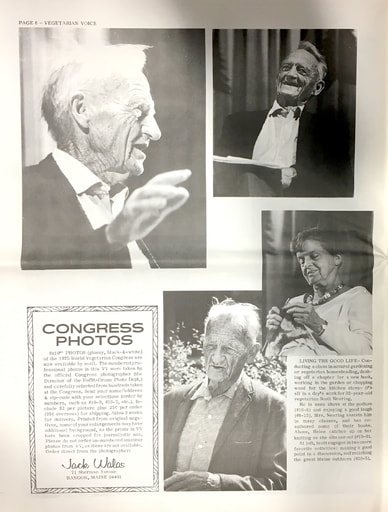 “It was inevitable that Scott, an incredible 92, and Helen, should steal the show, as well they deserved to for their courage in bucking the materialistic-carnivorous trend long ago when it was absolutely unheard of. They have lived to vindicate their beliefs and over 2,500 pairs of feet beat a path to their door every year. The Nearing Monday lecture was packed and the young were well in evidence.”

In 1975, Moran was a young person who had read the Nearing’s vegetarian bestseller “Living the Good Life,” which was reissued in 1970 after being self-published in 1954. Moran distinctly remembers the first time she saw the Nearings.

“I was in a classroom where speakers were being told what to expect over the week,” Moran recalled. “The Nearings were late.”

Once the famous couple arrived, Moran said the crowd was surprised and impressed when, rather than walking down the aisle, 92-year-old “Scott jumped over the benches” to find a seat and demonstrate the power of a plant-based diet.

Nancy Berkowitz was another young person at the 1975 congress. She came to Maine as an attendee and volunteer from Florida, where she was working at a vegetarian health spa and had also read “Living the Good Life.” Berkowitz later became friends with Helen Nearing and helped her care for Scott Nearing during the last year of his life. Scott Nearing died at age 100 in 1983, and Helen Nearing died in a car crash at age 91 in 1995.

Berkowitz, who now lives in Blue Hill and whose husband, Warren Berkowitz, is the farm manager of the Nearing homestead The Good Life Center, also has fond memories of the congress.

“I remember working in the kitchen and registering people,” Berkowitz said. “One thing I remember is getting these boxes of bing cherries, and that was the most bing cherries I’d ever seen. Freya Dinshah was in charge of the food, and she and her husband were really into fresh food before that was a thing.”

Dinshah said that the American organizers had to develop recipes that would feed 100 people. She recalled being thankful the hand calculator had become available, as it made scaling up home recipes easier.

Dinshah then took those recipes, which include Down East corn chowder, mint of Maine potatoes, and chow Maine stir fry, reduced them to family size proportions and wrote a 40- page, spiral-bound cookbook. All the book’s recipes are vegan, though at the congress, rennetless cheese and cow’s milk were available to participants who wanted to add them to the vegan dishes.” Shakers of nutritional yeast were placed on the dining hall tables.

“We sold the book to colleges and summer camps and some hospitals across the country,” Dinshah said. “In subsequent years, we’d go to a campus to see about having a congress and they’d say, “We have your recipes.”

The New York Times noted that the 1975 World Vegetarian Congress included vegans, vegetarians, fruitatarians, food reformers, natural hygienists, “the Jain vegetarians from India who do not use any food that grows below ground, such as potatoes and carrots; and the Namdhari Sikhs from India, who won’t drink water drawn through a pipe. They get their water from the well of a nearby farm.”

Dinshah said the well water and many other details were arranged by John Benoit at the University of Maine.

In addition to being fresh and seasonal, the food at the congress was very simple with little seasoning in order to accommodate the needs of all the various vegetarians in attendance, some of whom eschewed salt, sugar, white flour or spices. The meals at the 1975 World Vegetarian Congress mirrored the extremely simple fare the Nearings were famous for eating.

In a story about the event’s menu that ran in the Washington Post on Aug. 28, 1975, chef Ronald Gosselin from the University of Maine described the food as “much different” from what he and his team were used to preparing.

“When we cook for the students and we have string beans on the menu, we open cans and that’s that,” Gosselin told the Post reporter. “For the vegetarians, it means assigning six or seven of my crew to snap 12 or 13 bushels of beans. That takes time.”

On the final night of the congress, the menu featured celery soup, summer salad, corn on the cob, broccoli with zucchini sauce, lentil cutlets, baked peaches and Soyagen cream, that last made from a Loma Linda brand soymilk.

“We have to remember that in 1975 there was no Silk soymilk in a refrigerator at the supermarket,” Moran said. “If you wanted nondairy milk, there were a couple Adventist companies that had powdered milk in a can. It was sweet and nasty. There were some mock meats in 1975. But back then we hadn’t even figured out how to make a muffin that was more than half an inch high and didn’t weigh a ton. People who wanted to eat vegan back then really had to want it.”

Those in attendance at the congress definitely wanted to change the way Americans ate, and their convictions and subsequent actions went on to make our country plant-based to a degree that would have been almost unimaginable in 1975.


This article was originally published Aug. 16, 2020 in the Maine Sunday Telegram.

Avery Yale Kamila is a food writer who lives in Portland. She can be reached at

This email address is being protected from spambots. You need JavaScript enabled to view it.


This email address is being protected from spambots. You need JavaScript enabled to view it.
Twitter: AVERYYALEKAMILA

Cook the mushrooms in a small amount of water. In a separate pot, cook the vegetables (except the mung bean sprouts) in the oil for 2 minutes. Stir to cook evenly. Add the water drained from the mushrooms plus additional boiling water to make 1 cup in all. Stir. Cover the pot tightly. Cook about 5 minutes. The vegetables should still be crisp.

Stir in the mung bean sprouts and cooked mushrooms. Remove some liquid from the pot, making a paste of this liquid with the arrowroot powder. Return to the pot with the vegetables. Stir and cook for 3 minutes. Serve immediately with rice. May be accompanied with tamari.